These 10 Bizzare & Traumatising Food Platings Will Make You Lose Your Appetite.*Sorry, In Advance * 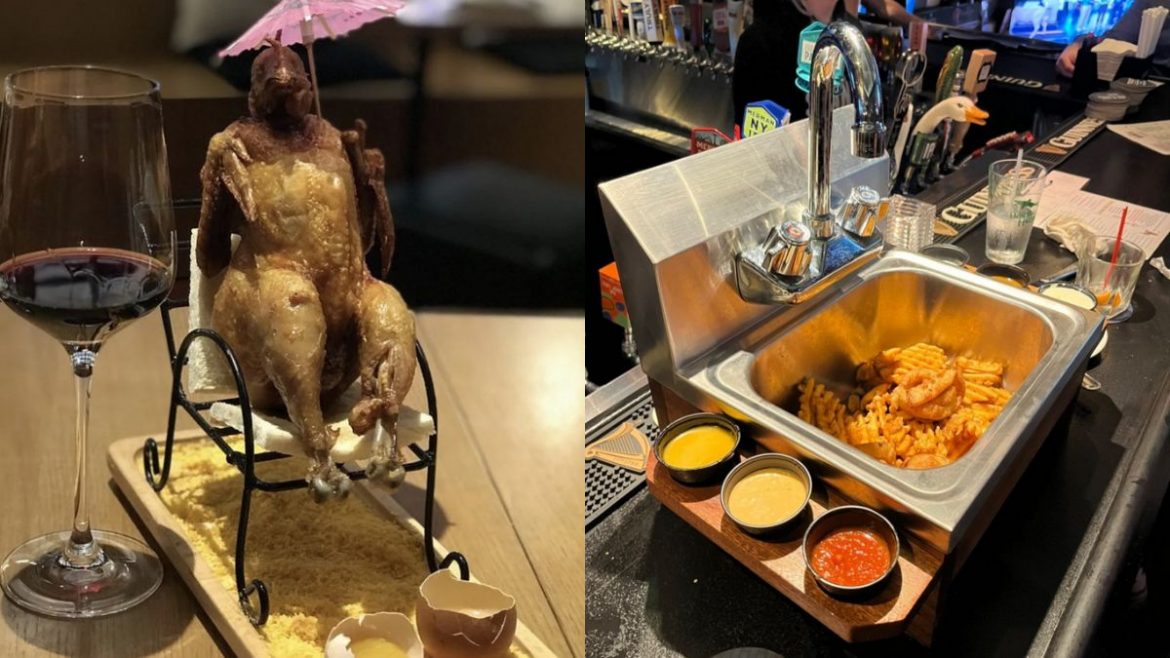 The types of bizarre food experiments that we have seen on the Internet are enough for us. However, these restaurants don’t agree with that. Recently, we stumbled upon some weird food platings that will make you throw up or lose your appetite. Here are ten of the most strange food platings that you can’t stomach. From creepy chicken to food in the sink, they have done it all.

1. Creepy Chicken On A Chair

This fried chicken placed on a chair with an umbrella is the creepiest thing ever. If that wasn’t enough, the chef placed two broken eggs in front of it.

2. Say Cheese On A Mouse Trap

Many would use a charcuterie board for beautiful cheese plating, but these guys decided to use mouse traps. Would you like a piece of cheese on the mouse trap?

A burger on a simple plate with loads of fries sounds delicious and comforting. However, the one in the organ donation bag raises suspicion about the origins of the meat.

There are so many nice plating options. Why would anyone want to eat from a lizard? The set-up looks like the food is in the lizard’s stomach, and it feels real.

5. Not Even On Halloween

The cheese charcuterie board with a mouse displayed on it is the most unappetising thing ever. The mouse has meat pieces on its bones. Is it even acceptable?

6. Is It Sanitary To Eat From This?

This food plating makes absolutely no sense. However, it does raise a question: is the food in the sink sanitary enough to eat?

7. English Breakfast In A Shovel

The shovel reminds us of the snow and the dirt that we dig using this tool. And eating food on it is something that gives us creeps.

8. The Nasty Nest Of Food

Would you like your meal in a bird’s nest? The images of worms sticking on the side of those nests appear in our brains.

This one is too irrational to even think cause no one would think of placing the chicken on the opening of a cold drink glass. It is making the food soggy and extremely unappetising.

The good old bread baskets looked super cute, yet these people decided to serve them in what appeared like the skin of an animal. Would you take a bite of that?

These were some of the traumatising platings that we came across. Tell us what you think of these and if you would dare to give them a try.