This Aeroplane Gurudwara In Jalandhar May Just Be Your Ticket To Hollywood! 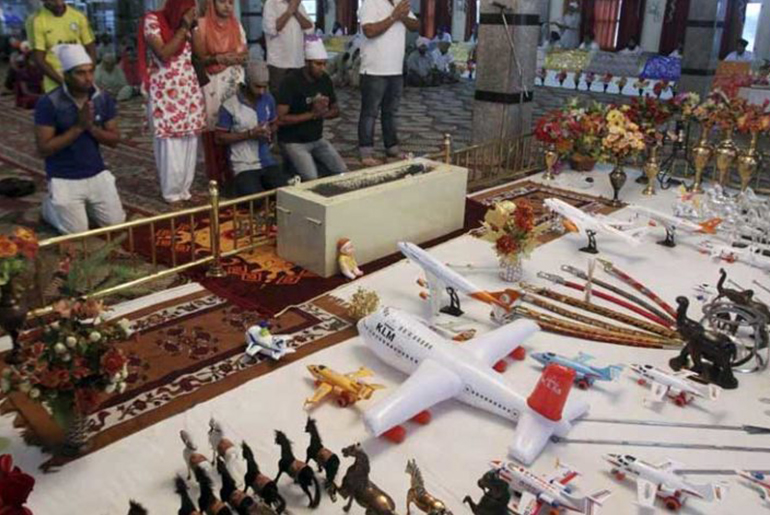 Childlike fantasy or juvenile superstition? People debate, while believers offer toy aeroplanes to this Jalandhar Gurudwara in hopes of visa approval. Shaheed Baba Nihal Singh Gurudwara near Jalandhar has recently been gaining popularity and being referred to as the ‘Aeroplane Gurudwara’. The reason for this is due to the fact that devotees flock here from all over the country to offer toy aeroplanes on the gurudwara shrine. Yes! You heard it right!

Devotees offer toy aeroplanes as a prayer offering to realise their dreams of migrating overseas. No one knows exactly who first came up with this bizarre idea or how this all started. It’s an urban legend that a group of young boys seeking student visas abroad used this method to enact their prayers, thus this tradition caught on.

The Toys Are Distributed Among Children

Now the Gurudwara receives over 200 toys aeroplanes as offerings on any given weekend  from devotees praying for visa acceptance to go abroad. The toys are distributed among children if you were wondering what happens to the aeroplanes at the end of the day. It is estimated that the neighbouring area of Jalandhar, Hoshiarpur and  Phagwara has over 6,00,000 NRIs (Non-Resident Indians). The Sikh slogan ‘Bole So Nihal’, meaning: utter and it shall be fulfilled comes to life here everyday. It’s a beautiful illustration of: dare to say it, and it will happen.

Those that sincerely express their desire in the house of the lord have always been rewarded. So weather you choose to believe or not, the aeroplane gurudwara sure is a fascinating visit. And if you do visit why not believe the best beliefs? When: Weekends are the time where most of the aeroplanes come in
Where: Shaheed Baba Nihal Singh gurudwara is located in Talhan dist. about 10kms from Jalandhar
How: There are vendors just outside the gurudwara selling toy aeroplanes