Top 5 Facts Of The…
Top 6 Destinations In India…
Not Norway, This Cabin Is…
6 Gorgeous Resorts In Goa… 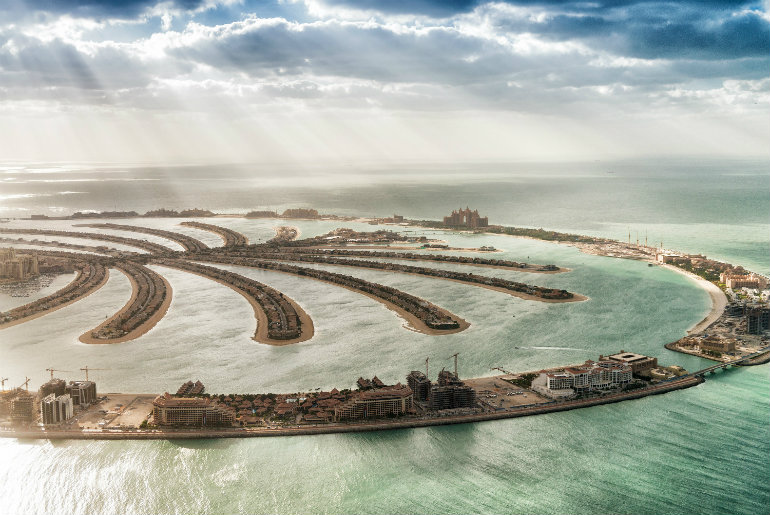 The Palm Jumeirah is one of the very rare and few marvellous architectural landmarks created by man. It is also called as the eight wonder. Here are 5 facts about the Palm Jumeirah.

1. Can Be Seen From Space

The island is referred to as the eighth wonder of the world due to its best attractions like Atlantis that creates an iconic structure at The Palm. Did you know this world famous attraction is one of the very few places that can be seen from space due to impeccable geometry that lends unique shape and huge scale to the project.

Also Read: A New Dancing Fountain Is The Latest Addition To The Dubai Attraction List!

2. Satellites Were Used To Create The Palm

Engineers used satellites which were guided by a hi-tech GPS that helped spray the sand into place with pinpoint accuracy. It also used Vibro-compaction technology that helped them to prepare the 560 hectares of reclaimed land to be built on.

The Palm island has added around 120 kilometres of Dubai shoreline which is an increase of 166%. The island is so huge that it can cover around 600 football pitches and is four times the size of London’s Hyde Park.

4.Prevents From Tycoons and Storms

The breakwater that is surrounded across the crescent of the palm helps to protect the island from high waves in case of a typhoon or storms. It is made of geotextile fibre, sand, small and medium rocks that make the breakwater stable and strong.

Also Read: Everything Free For Kids This Summer At Atlantis The Palm

5. Millions Of Tons Of Rock & Sand Were Used

Over 7 million rocks were placed from the Hajar Mountains and 120 million cubic metres of sand was dredged from the bottom of the sea. So much rock and sand was used that a 2m-wide wall could be formed around the globe three times.