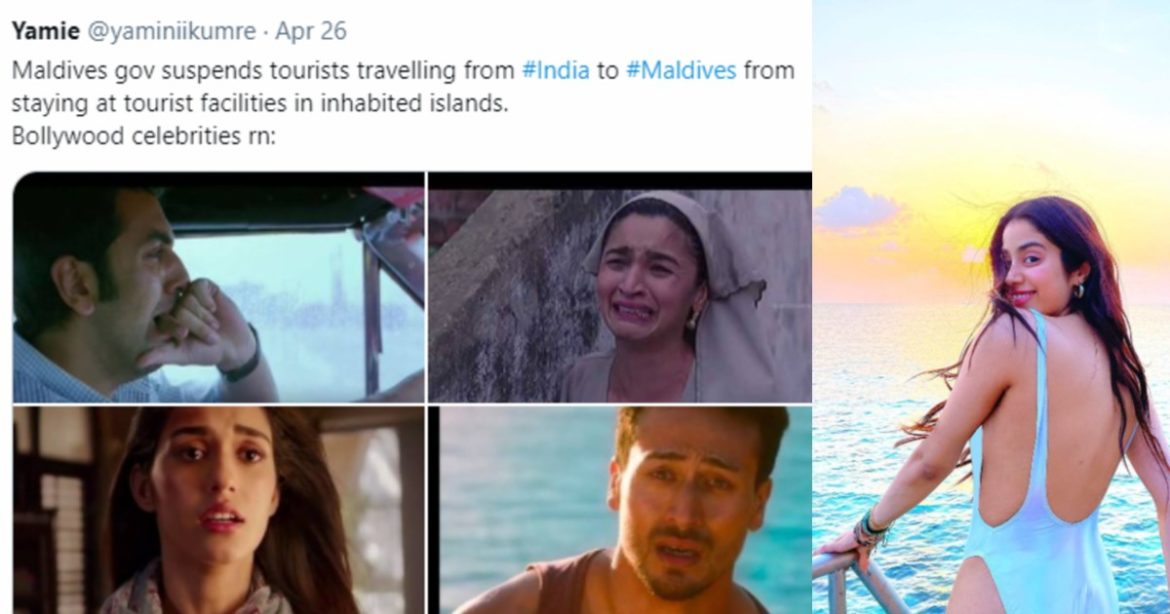 Ever since the Maldives reopened borders amid the coronavirus pandemic, many Bollywood celebrities like Alia Bhatt, Janhvi Kapoor, Tiger Shroff, Disha Patani, Sara Ali Khan and more were seen holidaying in the Maldives. Their social media platforms were flooded with pictures from the island nation. But since the past few weeks, people on Twitter have called out celebrities for flaunting their privilege on social media. Actors like Nawazuddin Siddiqui and Amit Sadh slammed the actors for their lack of empathy. And now since the Maldives has put bans on Indian tourists, the netizens on Twitter did not spare the chance to troll Bollywood celebrities for travelling to the island when the country is battling against the pandemic.

The Maldives which had reopened for international tourists a few months ago, has put restrictions on tourists from India all over again, citing the alarming surge in COVID-19 cases in the country. The Maldivian government issued a directive suspending tourists travelling from India to the Maldives. The order will come to force on April 27, 2021. The Tweet by the Ministry of Tourism, the Maldives, states, “With effect from 27 April @HPA_mv suspends tourists travelling from #India to #Maldives from staying at tourist facilities in inhabited islands. We thank you for the support in our endeavour to make tourism the safest possible with minimum inconvenience.”

With effect from 27 April @HPA_mv suspends tourists travelling from #India to #Maldives from staying at tourist facilities in inhabited islands. We thank you for the support in our endeavour to make tourism safest possible with minimum inconvenience.

Replying to the ministry’s tweet, netizens have flooded Twitter with posts trolling Bollywood celebrities. A user wrote, “Isn’t it a bit too late? All Bollywood celebs have been there & have posted “sun-kissed” pics.” Another stated, “Tsk tsk tsk now how will our Bollywood celebrities and influencers enjoy their bubble of privilege amidst a national apocalypse?” Many netizens took digs on the celebs with hilarious picture memes.

Viral Bhayani clicking Bollywood celebrities at airport be like… pic.twitter.com/IawxBzBigd

Meanwhile, since Nawazuddin Siddiqui had slammed the vacationing celebrities, one user tweeted:

The virus is spreading like wildfire now. It’s best to stay indoors and step out only when absolutely necessary.