Why Do We Celebrate Durga Puja? 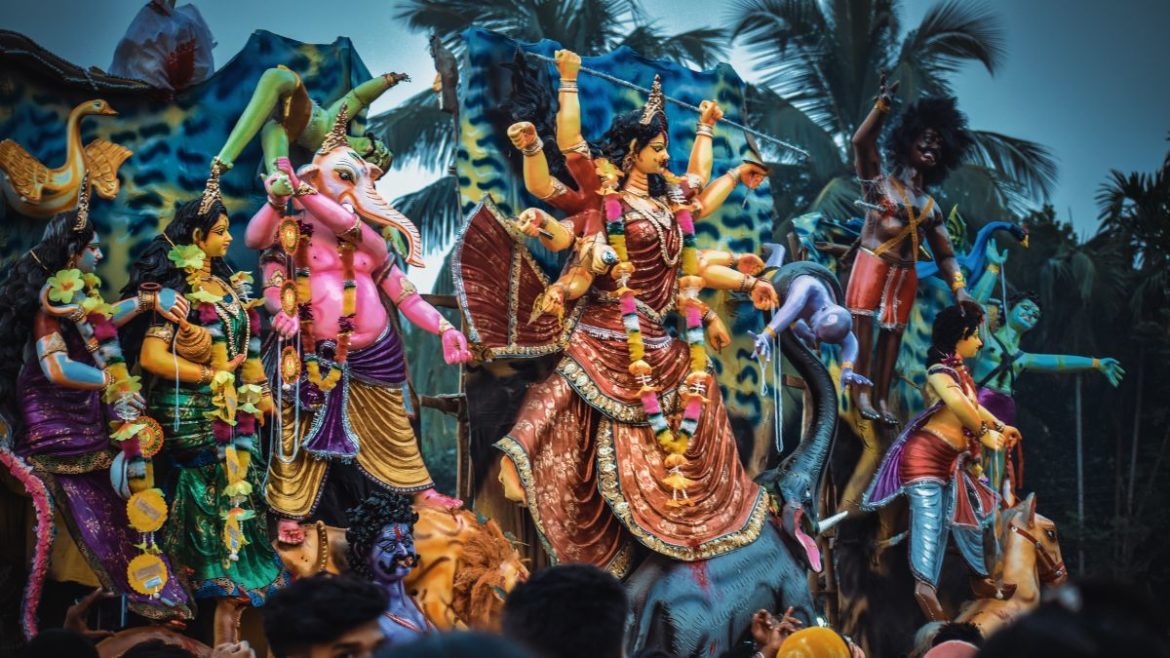 Durga Puja — two words to brighten up any Bengali’s face in the world. Wait! Have you ever encountered a Bengali who has not spoken about the festival with passion and love? We don’t think so! Especially if one belongs to the city of joy, Kolkata, then Durga Puja is nothing less of a celebration. The festival has tons of childhood memories, stories and legacies attached to it and all Bengalis connect with it deeply. Apart from the personal and emotional connection with this auspicious occasion, Durga Puja is also a time when we welcome the all-powerful and mighty Goddess to our homes.

Durga Puja & Its Essence For Bengalis 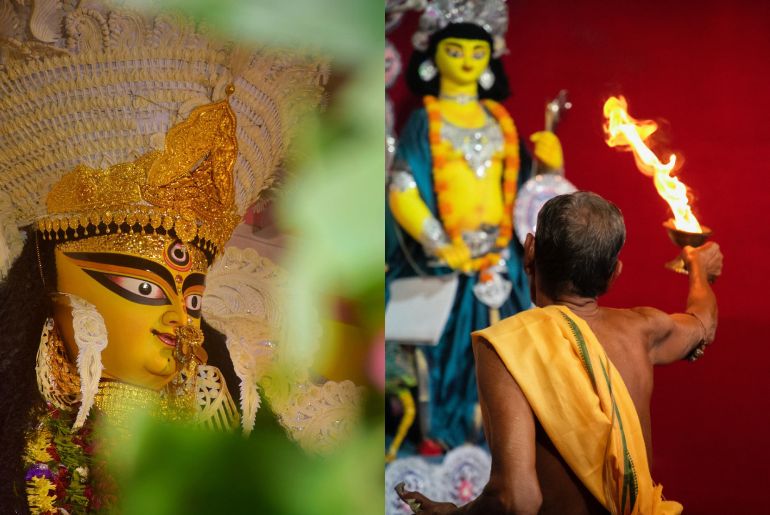 Nothing less, nothing more, Durga Puja is when Bengalis lose all their calm. They don’t shy away to look for Durga Puja dates on the first day of the year or as soon as the new calendar arrives. Yes, this is how obsessed Bengalis are with the festival. The Durga Puja, as some say, is a carnival that is prepared for months in advance. As fall nears, people begin shopping, and planning what will take place during the five days of extravaganza. Eventually, as Mohaloya arrives, it won’t be wrong to say Bengalis go crazy for the upcoming festivities. 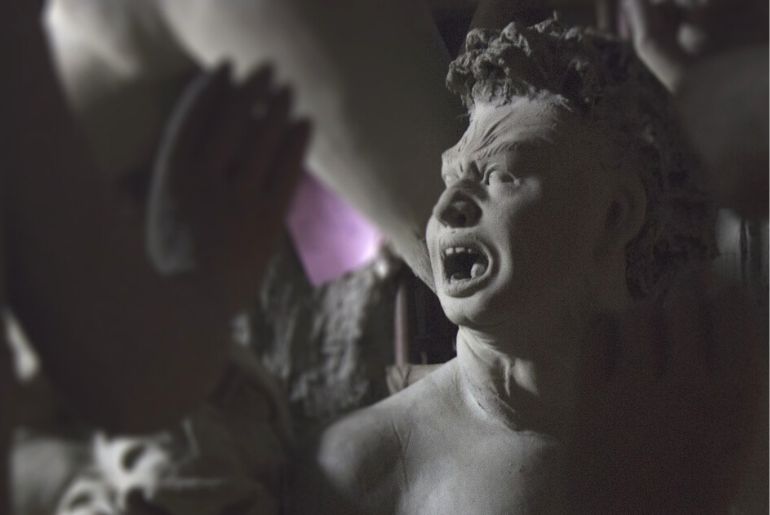 The festival has various stories and legends as to why Durga is worshipped at this time of the year. For Bengalis, it is majorly celebrated to mark the victory of Goddess Durga over the demon, Mahishasur. The majestic idol of Durga has Mahishasur at her feet and getting killed by the all-powerful Goddess. Mahishasur was a king, who had been blessed by Lord Brahma with the power of being indestructible. After a lot of penance, he begged for a wish to never die. He mentioned that he shouldn’t be killed by either a man or an animal. And rightly so, Lord Brahma granted him the wish. It is also said that Mahishasur had utter pride and believed that he could never be killed by a woman. Filled with pride and the blessing of immortality, Mahishasur attacked the heavens — the home of the Gods. It was only then, to curb the powers of Mahishasur, Durga was created by combining the powers of the three Lords of the Universe — Brahma, Vishnu and Maheshwar. She was then given weapons by the other Gods to fight the demon. Durga fought the evil demon for a period of 10 days and finally, on the last day, She stabs Mahishasur with a trident. And, the war comes to an end. Thus, Durga Puja is associated with the victory of the powerful Goddess over the evil demon, Mahishasur. 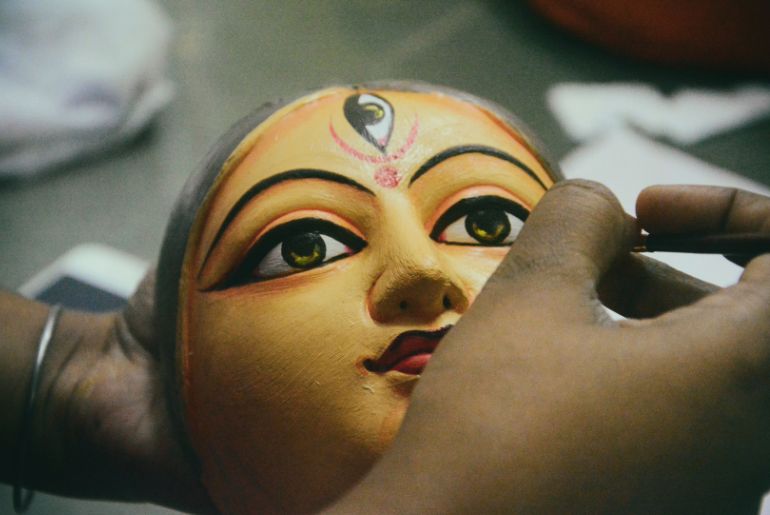 On the day of Mahalaya, people celebrating wake up in the wee hours to listen to Chandi paath — describing the victory of Goddess Durga over Mahishasur. Although there is one classic version of the Chandi paath that people listen to, over the years, the television industry and music industry have come up with various versions of this epic. Meanwhile, you can listen to the classic reading by Birendra Krishna Bhadra here. Bengalis have a certain affinity towards Bhadra’s version of Mahalaya Mahishahur Mardini. To know more about the rituals of Mahalaya, take a look at this: Shubho Mahalaya: Here&#8217;s Why Mahalaya Is Celebrated 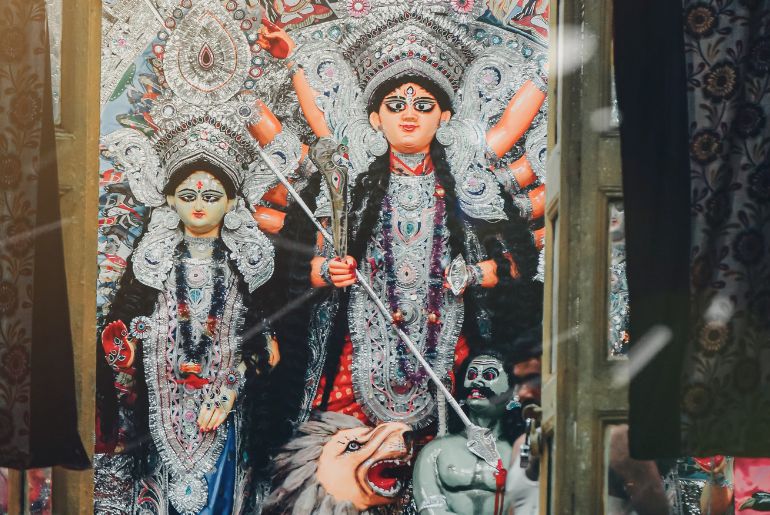 With the ending of the Pitri Paksha, when people pay homage to their ancestors, Durga Maa finally begins her journey to Earth. She begins her travel to her paternal home, on Earth with her children, Lakshmi-Saraswati and Ganesh-Kartik. Goddess Durga’s homecoming is celebrated with great pomp and joy. And, she is worshipped for four days, before she finally bids goodbye. Interestingly, the strong, radiant and beloved Maa Durga begins her travel on a vehicle. These vehicles differ year after year. And each vehicle holds a certain meaning. These will define the state of affairs on Earth. For instance, if the Debi arrives on Earth in a boat, it signifies prosperity for the earthy being, while her arrival in a palanquin will bring in disease and epidemic. FYI, Maa Durga is arriving on an elephant this year. This signifies, Her arrival will be a blessing on Earth. She is leaving Earth in a boat. These are usually mentioned in the panchangs every year.

End Of Ravan By Ram 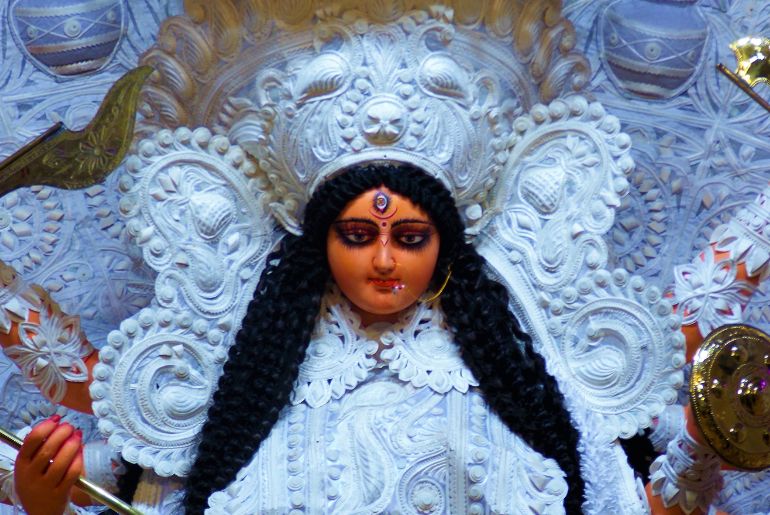 It is said, the right time to worship the Goddess is during the spring season. However, this untimely worship of the powerful Goddess is done as Lord Ram had worshipped Her to seek blessing before he fights Ravan. Also termed Akal Bodhan, the worship was done by Lord Ram to win over Ravan. As per the legend, it was crucial to get the blessings of Goddess Durga, as She had blessed the evil king. It is also told that none would have been able to kill the king of Lanka without seeking the approval of Durga. After this, Lord Ram initiated the untimely worship of Hers and even won her blessings. When Lord Ram had one blue lotus left to complete the number 108, he attempted to offer his eyes as the final lotus. That is when the Goddess appeared in front of Him & blessed him. Finally, Ram kills Ravan on the final day of Navratri which is celebrated as Vijaya Dashami. This autumn worship of the Mahadevi began with Lord Ram and continues even today. 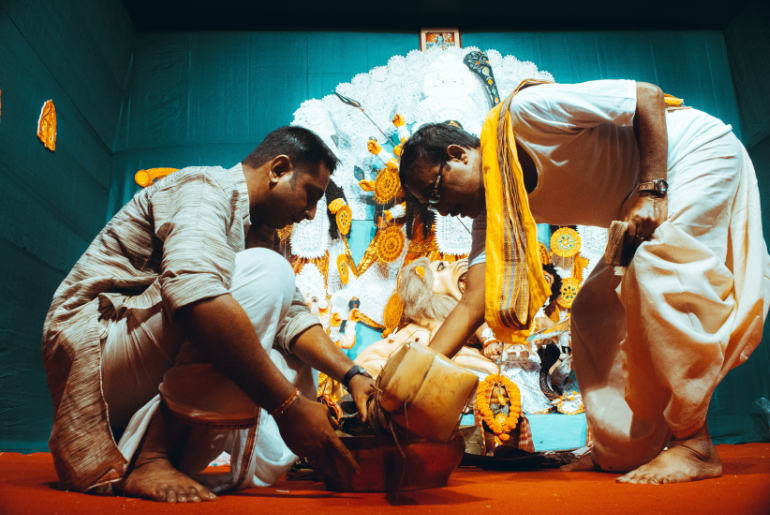 After all the anticipation, prepping pandals, making massive idols of the Debi, on Shashti, the sixth day of Navratri, Maa Durga is welcomed. On this day, Durga Puja officially begins for the Bengalis. Maa Durga’s bodhan ceremony is conducted. On Shashti, Goddess Durga’s face is finally revealed to the devotees, followed by other rituals like welcoming Debi for the five-day stay on Earth.

For the Maha Saptami day, the Goddess takes a bath. She is then worshipped with varied pure items. Additionally, the nine forms of Durga are also worshipped on this day of the puja. 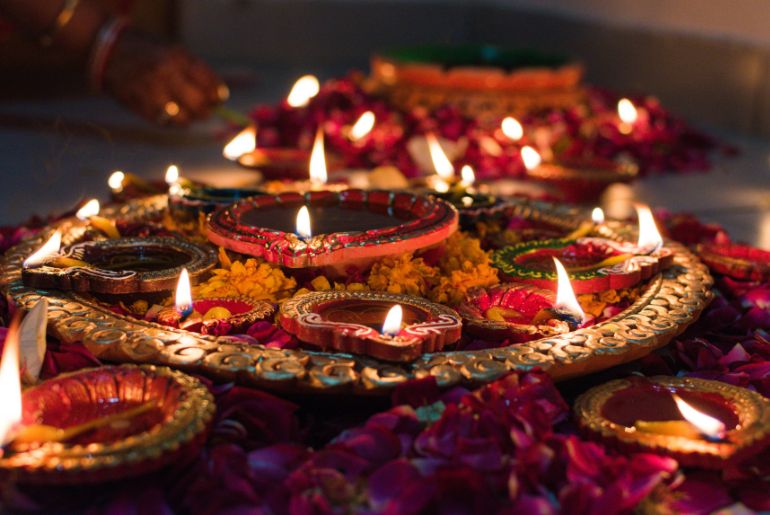 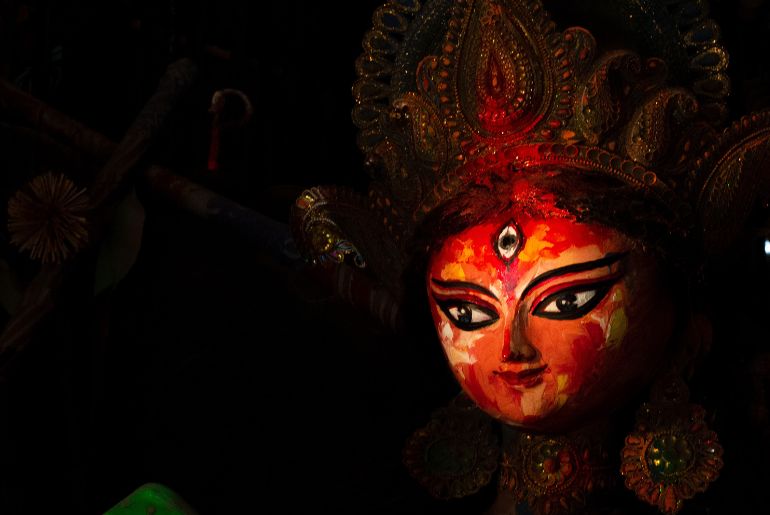 On the final of the festival, on Bijoy Dashami, all women clad in white-red sarees perform the ritualistic sindoor khela. It is also on this day, that Maa Durga leaves for her heavenly abode. It is also the day when all young ones seek blessings from the elders and wish each other Shubho Bijoya.

As the world preps to welcome Goddess Durga in her full glory, we can’t stop to express the excitement of this mega festival. The sight of kash phool, the nip in the air, final touches to the pandals and idols, and one last leg of puja shopping are what people are experiencing at the moment. And all of it is nothing, but magical to a Bengali, and even for the probashi ones. Finally, as we get together to celebrate this carnival, we wish you a glorious Shubho Sharodiyo and end with the evergreen note, ‘Asche Bochhor Abar Hobe.’