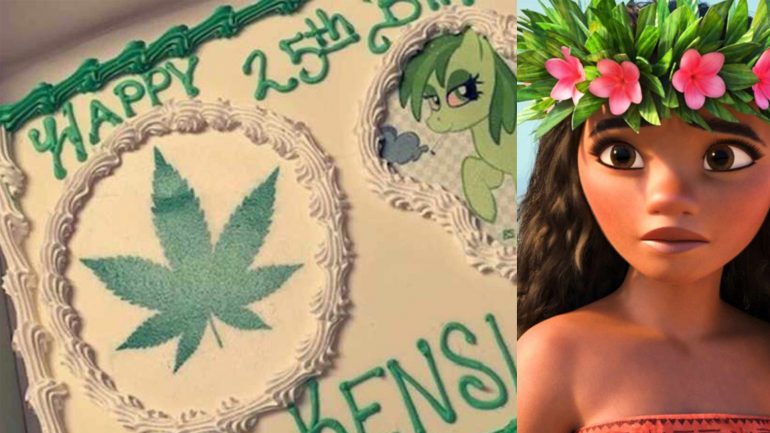 Recently, a mom ordered a ‘Moana’ cake for her daughter’s 25th birthday and in return she got a Marijuana cake.  Ofcourse, the daughter didn’t complain and infact enjoyed the cake. Kensli Taylor’s mom told the bakery that she wanted a ‘Moana’ cake which is Kensli’s favourite cartoon. The Dairy Queen bakery thought she said ‘Marijuana’ cake. They were surprised to see a cake that had a marijuana leaf and a pony in the side with red eyes and smoking a joint.

This little funny incident was shared by Kensil on her facebook and the photo of the cake went viral. In her Facebook post, Kensli wrote ‘So my mama called and ordered me a cake telling them how much I loved Moana. (Because really I do) Well needless to say these people thought she said marijuana. That ice cream cake was still good though.’

I haven’t had a chance to tell y’all about our experience this weekend with my birthday cake. So my mama called and…

Kensli, the huge Moana cartoon fan had an interview with WMAZ Channel 13 in which she mentioned that they have ordered from the Dairy Queen for more than 10 years now and also believe that the employee at Dairy Queen made an honest mistake.

Also Read: Mike Tyson Is Building A Weed Resort ‘The Lollapalooza of Cannabis’ In California

“I think they thought that she said ‘marijuana’ because we are from South Georgia and kind of have an accent. So, ‘Moana,’ marijuana?” said Kensil in the interview. The employee apologized and offered to make another one but Kensli said they loved the ‘marijuana’ themed cake. And further, she added that they will definitely order a cake for her next birthday.

But we also hear that the employee who took the order has been fired from her job. We learn this from the comments on Kensli’s post.