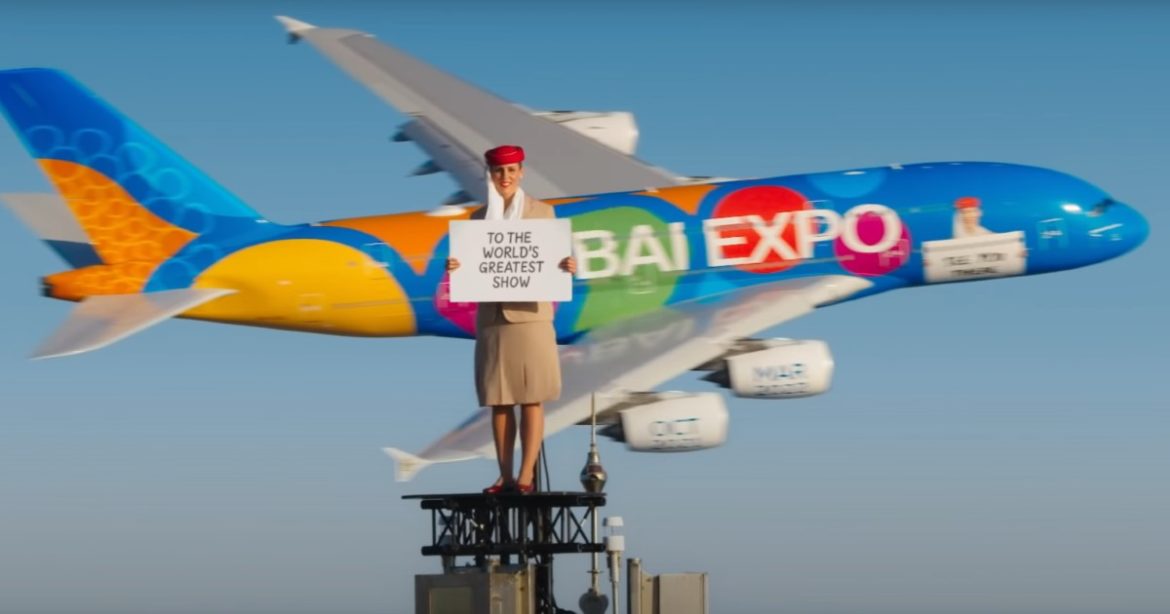 Women have been conquering the world one feat at a time. In one such unbelievable incident, a woman dressed as Emirate’s cabin crew Nicole Smith-Ludvik stood at the top of Burj Khalifa, the tallest building in the world, to endorse Emirates Airline. This might sound like an impossible task but it is true.  Emirates got her to the top of Burj Khalifa to shoot a commercial to celebrate the UK’s shift from the red list to amber.

Emirates has done it again and made a sequel that shows the Emirates flight attendant standing on top of the world’s tallest building. However, this time, the call is for the world to visit the greatest show, Expo 2020 Dubai. The one-minute video shows American skydiver and stuntwoman Nicole Smith-Ludvik dressed in Emirates’ flight attendants’ uniform. However, the ad now has an A380 fly by while Ludvik held the placards that read: “I’m still here!”. “Wow! I can see Dubai Expo”

A Cabin-Crew Stands Atop Burj Khalifa For The Endorsement

Nicole dressed in an Emirates cabin crew uniform can be seen standing on the skyscraper’s spire for the endorsement. She is also seen holding plaque cards expressing gratitude from the airline after being removed from UK’s red list. Watch the video yourself and ogle at the jaw-dropping feat.

However, it took a lot of planning to undertake the stunt. It took one hour and 15 minutes to climb to the top spire after reaching a level 160. Nicole stood on space with a circumference no wider than 1.2 metres. Now here’s the secret: Nicole is actually a skydiver and a stunt woman.

Reconnect with your loved ones or take a fabulous vacation.
From 8th August travel to the UK gets easier.#FlyEmiratesFlyBetter pic.twitter.com/pEB2qH6Vyo

Emirates Released The Making Of The Video

Within no time, the commercial went viral and it had massive responses from all over the world. While many praised the courage of the woman, many others thought that the video was fake. Emirates later took to social media and released a behind-the-scenes video commercial that confirms that Smith-Ludvik indeed stood at the top of Burj Khalifa.

Also read: You Can Enjoy A Hearty Brunch Inside Burj Khalifa, Here&#8217;s How

Real or fake? A lot of you have asked this question and we’re here to answer it.
Here’s how we made it to the top of the world’s tallest building, the @BurjKhalifa. https://t.co/AGLzMkjDON@EmaarDubai #FlyEmiratesFlyBetter pic.twitter.com/h5TefNQGQe

The BTS video too went viral and users declared Smith-Ludvik as the bravest woman on earth.