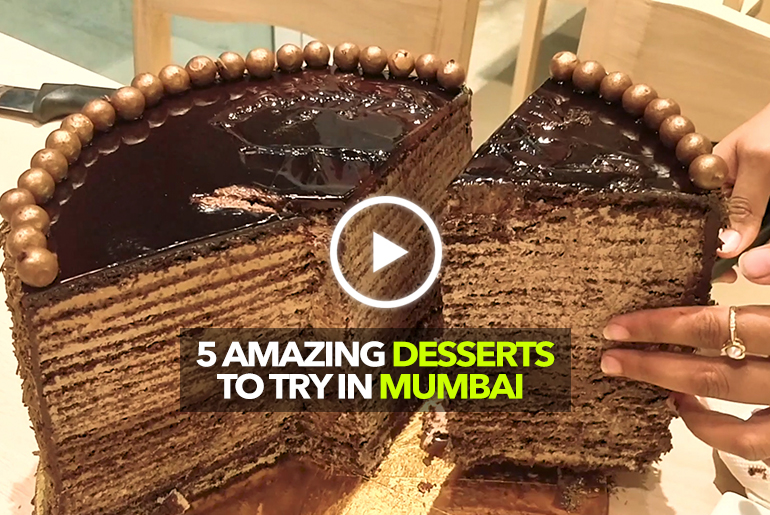 Up for a challenge? Think of yourself as the ultimate foodie? Head to Elementaria Bakery Cafe for the best food challenge ever. You could give it a go with 2 dishes. Finish one slice of their 48-layer cake within 10 minutes and get it for free. Otherwise, pay ₹1000 for the slice. This cake is made up of loads of chocolate ganache, hazelnut and almond praline. We have to warn you, finishing this is no mean feat.

Another option? Finish the Ele Jumbo Bowl within 7 minutes and get it for free! Otherwise pay ₹500 for the dessert. This giant bowl has 4 scoops of ice cream, a waffle slice, cupcake, choco fudge, sprinkles, choco balls, and jellies.

Also read: Elementaria In Mumbai Challenges You To Complete A Slice Of Their 48-Layer Cake Within 10 Minutes

Thinking about a sugar rush? Try the Midas Touch at Trench in Andheri & Bandra which towers over 1 feet and is nearly 1 kg of goodness. Grab at the Midas Touch served at Trench in Andheri & Bandra. As desserts go, it is the greatest and the baddest of them all! Towering over 1 feet and weighing nearly 1 kg, it is impossible for one person to finish the whole thing.

Also read: Trench In Mumbai Serves The Midas Touch Dessert Which Is Nearly 1 Kg Of Goodness

Henpecked in town is a quaint little European styled cafe that serves farm to table, organic food and of course Harry Potter’s famed Golden Snitch. The Golden Snitch is a golden chocolate sphere with raspberry mousse, chocolate truffle creameux, fondant surprise, raspberry gel and caramalised chocolate. There’s a lovely crunch to the dessert that makes it kind of difficult to stop eating!

4. The Everest – The Brew Corner

The Everest at The Brew Corner in Vasai is known to be the tallest dessert in town which is the height of a tower of Jenga! It might be a bit too much for one person, but if you’re a major sweet tooth like me, why not have a go? The Everest (₹400) served at The Brew Corner is so tall that a steel rod keeps the tower in place.