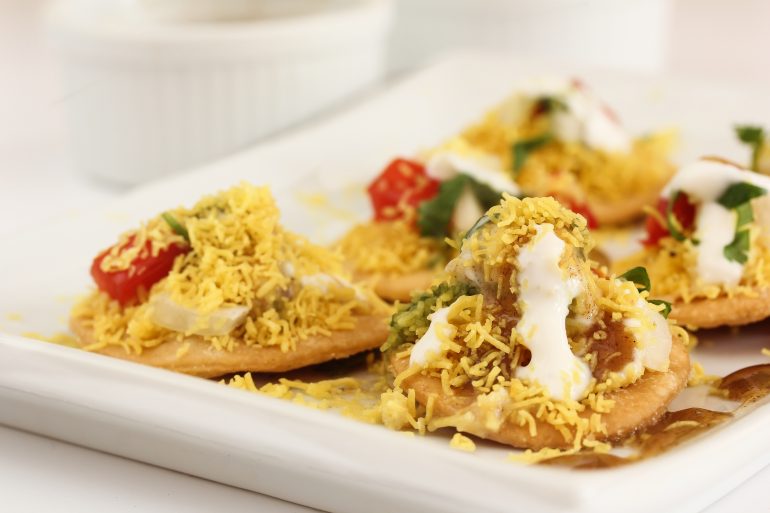 Invented during the time of the Mughals, we have gone through generations of recipe reiteration to create the most beloved street food in India.

Unique to the state of Maharashtra, it’s a simple dish where a pav (fluffy bread) is cut from the centre and added with chutneys and a deep fried potato patty. Simple as it may be, it’s popularity among the masses is unprecedented. Many other states in India have tried duplicating the Vada Pav but no one came close to how it is cooked in Maharashtra. Because the pav is indigenous to this state, the creation of it elsewhere just doesn’t cut it. Also, the way the fried aloo patty is made, makes all the difference in the world. There are various Vada Pav stalls in Mumbai that are famous for recipes. The best way to explore is to go out and just eat. Oh! The very mention of pani puri makes my mouth water. One chaat that is loved across the country and has a unique style of preparation in almost all states of the country.  It also shares a varied nomenclature in the country – from Gol Gappa, Puchka, Pani Puri – which is essentially the same thing. Originating in Delhi, the Gol Gappa became a rage as it popularity soared higher than an eagle in the sky. Quickly proliferating across the country, people came up with different recipes to make it interesting. What is Paani Puri? It is a fried hollow puri that is filled with flavored water, tamarind chutney, spice-mix potato or plain hot chickpeas (depends which part of the country you are enjoying this) and onions.

Devour your eyes on this beauty.

Also Read: Your Food Guide For McCleodGanj And Dharamkot

The only things that separates them from each other is the addition of curd in Aloo Tikki Chaat. Otherwise they are identical in its preparation.  A pattie is made from mashed potatoes and then fried and mixed with tamarind and chilli chutney, topped with coriander leaves and sev for added taste and crunchiness. While preparing Aloo Tikki Chat, curd is also added to the entire spice mix to make it tangy.  The dish has its roots in the northern parts of India, but Ragda Patties is an evolution that happened in Mumbai. One of the best street side food you could probably eat in India. Samosas have made a name across the world as a favourite savory snack among the uninitiated.  This recipe takes samosa to another scrumptious level. The samosa is flattened and then topped with curd, tamarind and mint chutney. In some parts of India, they also add boiled chickpeas and sprinkle it with coriander leaves.

Simple, tasty and mouth-watering. Try it. A beautiful combination of tangy, sweet and sour – dahi puri is that one snack that will leave you feeling refreshed. It’s the addition of curd that does the trick and neutralizes the strong spices added to it. Every puri that goes into your mouth, will leave you wanting more. Having its origin in the Northern parts of the country, it is also called Dahi Batata Puri in those parts, which adds boiled potato to the mix. Equally delicious.