5 Unexplored Places To Explore In India 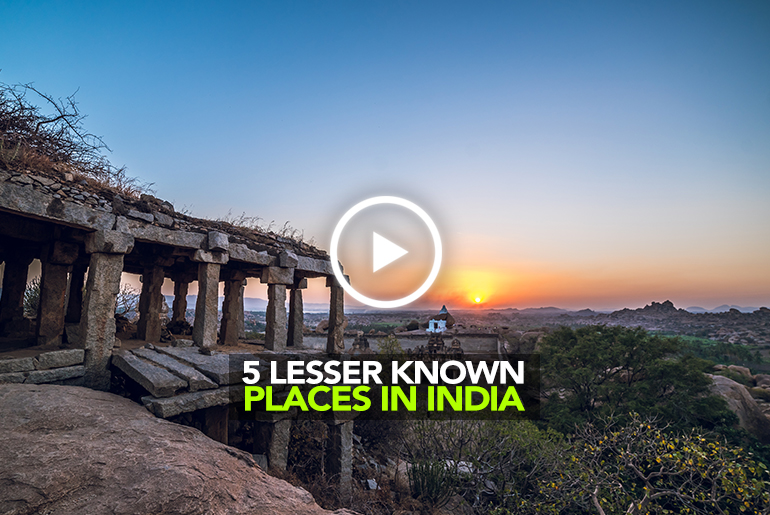 The path to adventure is to explore the unexplored. India has beautiful places that are yet to be explored. But team Curly Tales has attempted to visit some of the lesser known destinations of the country. Here we go –

The ‘mountain lake’ of Ladakh, or lake Tso Moriri is situated at an altitude of 15,000 ft and has a village of its own called the Korzok village, the highest civilization in the world! Surrounded by purple hills and with a beautiful of backdrop of snow-capped mountains, this Tso Moriri  lake is a must-visit for all those who wish to be one with nature. The lake in itself is mind-numbingly beautiful and the calm and peaceful surroundings would make you want to sit by the lake and gaze all day long.

Also read: Korzok- The Highest Civilization Of The World

A canopy? A forest? Or one big old tree? The Great Banyan Tree is one single tree that looks like a jungle. A 250-year-old Banyan tree in the Acharya Jagdish Chandra Bose botanical garden has spread its branches to the greatest extent. The widest tree in the world, the Great Banyan Tree covers an area of almost 3.5 acres! One look and you’d think you’re entering a dense forest. But once in, it’s just one tree with 3300 aerial roots making their way to the ground. With about a kilometre huge circumference and a height of 25 meters, this one is worth a visit. No picture can do it justice. Where else are you going to find such a natural wonder? Being the widest tree in the world, it also holds a Guinness Record.

Also read: The Great Banyan Tree in Howrah Looks Like One Dense Jungle!

Indulge in chill scenes with hippie bagpackers, take part in drum circles, dread- lock making, music sessions & more. Hippie Island in Hampi is where you can just relax and unwind with music and relish some amazing food.

Also read: 5 Things To Do At Hippie Island In Hampi

Did you know, these people place a miniature aeroplane on their water tank? They hope that someday they’ll go abroad. Seems like it’s working for them, don’t you think? If you are a 90’s kid you will probably recall Punjab. A product of Osho’s influence on Karunesh, Punjab is a German (yep, he is German born!) dude’s take on the classic time-travel to the pind of Punjab. Although the song depicts a daughter (Shweta Salve) leaving her father’s home after marriage, the khet, the mitti, the haveli, everything gives you a glimpse of the land. As a result, a wanderlust called Gunopur bit us and made us delve a little further into the tiny village of Gurdaspur (Punjab). Inhabited majorly by the Saini Sikh of Pama Got, their ancestors migrated here from Jammu in the early 90’s.

Also read: Gurdaspur: A Day In The Pind of Punjab

On our recent trip to Mussoorie, we visited the corn villages of Uttrakhand, Sainji & Bhatoli where every house is decorated with ripe corn. A trip to this village is part of the unique experiences offered by JW Marriott Mussoorie. Its the best way to get up, close and personal with the locals of the region. The Garhwalis are known to be extremely warm and welcoming. Corn is a staple crop here and the villagers make flour out of it after drying the corn. At Sainji village which is only 10 kms away from Mussoorie, every house is beautifully decorated with ripe corn. It is known to be a sign of wealth in this villages. So more corn used to cover the house, wealthier the family. Fun fact: The height of the door in their homes is short to discourage a thief from breaking in.

Also part: Wander In The Quaint Villages Of Uttrakhand, Sainji & Bhatoli Where Every house Is Decorated With Ripe Corn