Abu Dhabi’s Natural History Museum…
Stay Close To Al Bateen…
Most Liveable Cities In the…
Dating Back To 1761, Qasr…

Abu Dhabi’s Natural History Museum Is Now Open And You Can Visit It For Free! 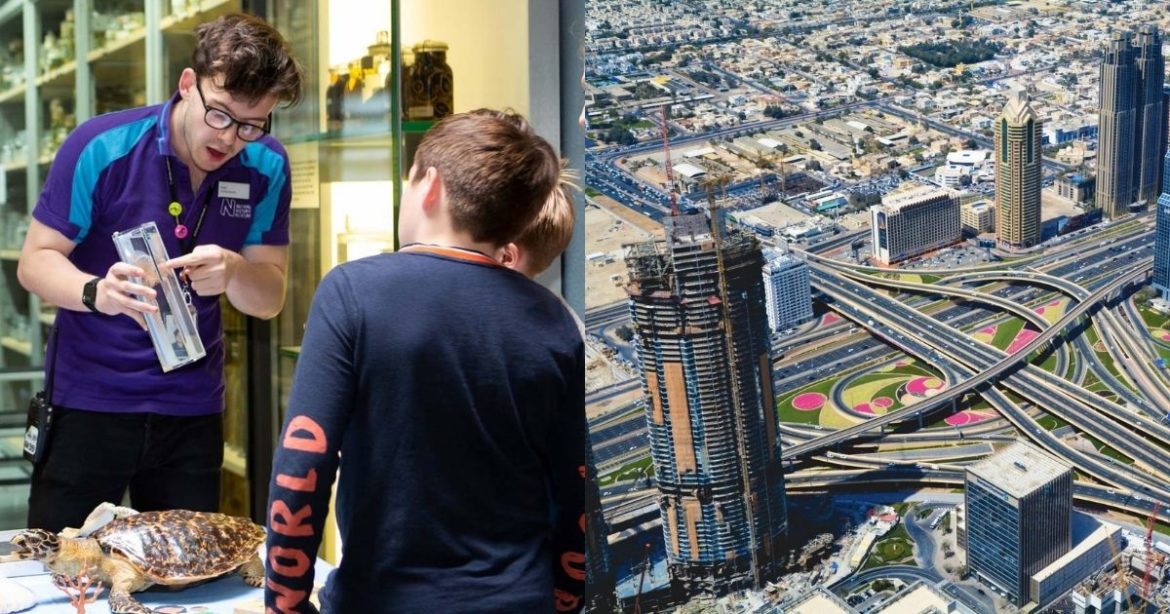 The Department of Culture and Tourism, Abu Dhabi, aired a mysterious video on its social media accounts. It vaguely displayed the unveiling of something related to ‘Natural History.’ The cultural setup of Abu Dhabi will perfectly accommodate the concept. The Natural History Museum is finally open  to public in Abu Dhabi fro 10am to 11pm until May 12.

What’s The Purpose Of A Natural History Museum?

The Natural History Museum is a premier science research centre and a world-class visiting attraction. There are unique collections and unequalled skills to address the world’s most pressing issues. It’s an interactive experience that tells the tale of a natural history discovery via the voices of Museum scholars and curators. Explore the museum’s 80 million pieces with innovative new features.

In augmented reality, you can meet a prehistoric marine reptile watch a short film about Museum research. Easily navigate the galleries in 360 degrees, thanks to Google’s Street View team. Get ready to tour ten new exhibits about natural history themes. Get on the expedition and scroll through the galleries to learn about adjustment in the natural world.

When completed in 2025, the Natural History Museum Abu Dhabi will form the fourth museum in Saadiyat Cultural District and will include a scientific research centre that will undertake studies in zoology, palaeontology, marine biology, molecular research and earth sciences. pic.twitter.com/imM2hx512a

Firstly, Louvre Abu Dhabi is already part of the National History Museum. Finally, the projects like the Guggenheim and the Zayed National Museum are now under development.

Also Read: Louvre Abu Dhabi Hosts An Array Of Events In Its New Season Ahead Of UAE&#8217;s Year Of The 50

The Zayed National Museum will serve as the focal point of the Saadiyat Island Cultural District. It will showcase the history and culture of the UAE. There will be an exhibition highlighting the UAE’s social and economic change. The foundation for the Guggenheim Abu Dhabi will be erect on the same island. It will be a cultural area developed off the coast of the UAE capital. Future will see it being a wider complex of arts and cultural organisations that will serve as a significant cultural attraction.

A silt curtain is being installed at the breakwater entrance for the Abu Dhabi Natural History Museum on Saadiyat Island in Abu Dhabi. Temporary navigational buoys will remain in place for the duration of the project. pic.twitter.com/o2N1Ky6lDt

Break Or Remove Or Damage Official Seals And...