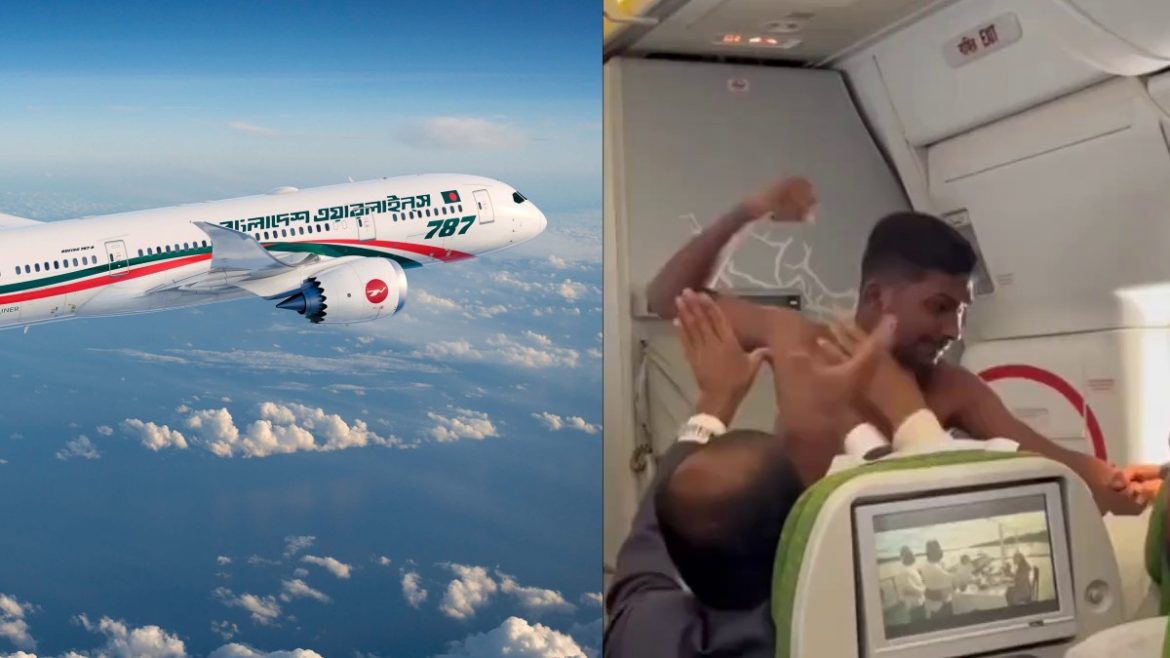 The biggest problem in this day and age is not climate change or plastic pollution. It seems to be the utter lack of flight etiquette. Amid the recent Air India pee-gate scandal blaring every TV screen and social media handle in the country, there seems to be yet another flight fiasco. This time, a shirtless man is seen punching his co-passenger in mid-air on the Biman Bangladesh flight. Here’s more about it.

The national carrier of Bangladesh, Biman Bangladesh, witnessed an incident of unruly passengers. A viral video shows a shirtless passenger who seems to be in his 20s getting into a heated, violent fight with his co-passenger. The shirtless man is standing, holding his seated co-passenger’s collar and throwing punches at him. Fellow passengers try to spot this fight but to no avail. The passenger, wearing a white shirt, blocks his punches and also hits him back.

Another "Unruly Passenger" 👊
This time on a Biman Bangladesh Boeing 777 flight!🤦‍♂️ pic.twitter.com/vnpfe0t2pz

This entire incident happened on Biman Bangladesh Boeing 777 flight. The route of the flight, date and time of this incident remains unknown. Earlier this week, another video did the rounds on the Internet regarding a passenger brawl. A Thai Smile Airways flight flying from Bangkok to Kolkata showed two passengers getting into a physical altercation. Within no time this ended up being a group fight mid-air. Co-passengers and the crew tried to pacify the passengers. The air hostess even ran to inform the captain and call for help.

Also Read: This US Flight Offers You Free Wi-Fi Aboard Domestic Flights From Feb 1

Not many smiles on this @ThaiSmileAirway flight at all !
On a serious note, an aircraft is possibly the worst place ever to get into an altercation with someone.
Hope these nincompoops were arrested on arrival and dealt with by the authorities.#AvGeek pic.twitter.com/XCglmjtc9l

These incidents like the one in the Biman Bangladesh flight, are in extremely poor taste. The lack of flight etiquette displayed is just appalling. We hope airlines take strict action against such passengers so it dissuades others from engaging in such questionable behaviour on flights.