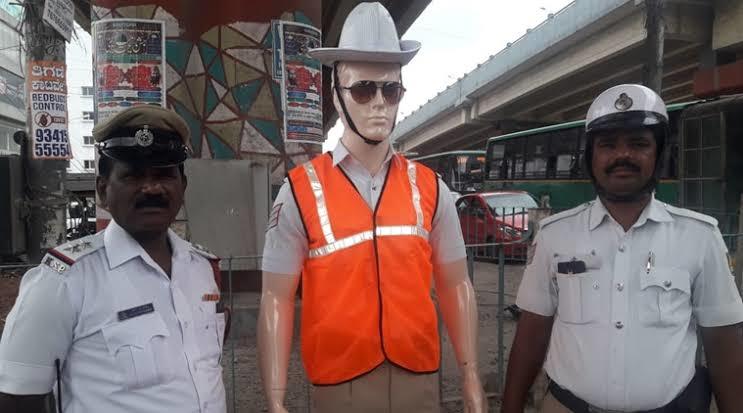 Bangaloreans! The next time you’re stuck in traffic, why don’t you look out of your window and play a little game. See if you can find out if the cop standing near you is a real one or a mannequin. Sound surprised? Well, the mannequins you see at the glass panels of shops, may have now walked right at the traffic junction near you, but dressed in a police uniform. Well, this time its as bizarre as you think it is, and we aren’t kidding. Bengaluru Traffic Police have placed 200 mannequins dressed like cops around the city to curb traffic violations. In order to get motorists to follow traffic rules and to maintain lane discipline, this novel initiative is adopted.

The overworked and understaffed Bangalore Traffic Police decided to finally get some more help, but more 200 life-sized mannequins that will be deployed in troublesome junctions in Bangalore. The inspiration behind this novel idea is simple if scarecrows are used by farmers to stop birds from destroying crops, then why not have fake cops to deter repeat offenders at traffic signals. And let’s tell you that these mannequins have their outfit game on point, dressed in standard police uniforms, reflector jackets, hats, boots, masks and sunglasses too. Quite an interesting way to trick motorists from believing that they are actual cops. 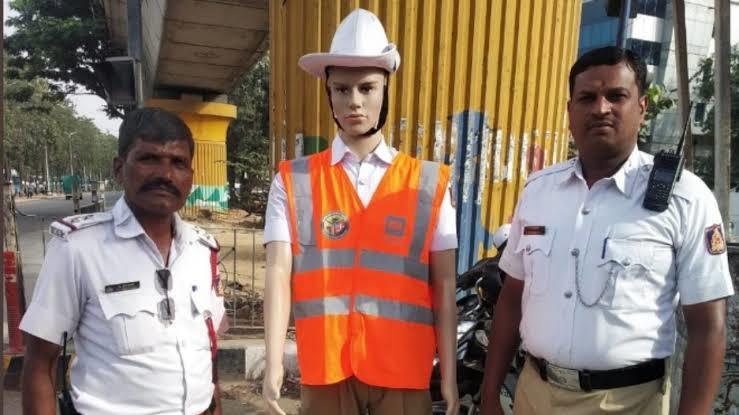 A step above the ordinary, these police mannequins will soon be installed with CCTV cameras to record violations. B. R. Ravikanthe Gowda, Joint Commissioner of Police of Traffic stated that the behaviour of motorists immediately changes on spotting a traffic cop. Research too shows that there are fewer violations in police managed junctions as compared to unsupervised junctions. And since the police cannot be deployed everywhere, hence there will be mannequins deployed. The next day, the mannequins will be replaced with real policemen t make sure that motorists follow the rules. This initiative was launched early this week with 30 mannequins deployed, and on Wednesday, 170 more were added.  Did you know Labourer’s Daughter Inaugurates A Railway Station Escalator In Bangalore?

The on-ground traffic personnel are tired of motorists’ ignorant behaviour towards following traffic rules in the city, especially in unmanned junctions. But now with this unique initiative, the police officers are optimistic that this is one way which can bring lane discipline in Bangalore. A senior official even stated that this is their effort to ensure that motorists follow traffic rules for his or her safety as well as that of other motorists and pedestrians. Smoother vehicular movement and fewer traffic jams can take place if this method is followed.

Pedestrians and motorists whoever has seen these mannequins at the traffic junctions in the city are highly amused by this tactic, yet they remain cautiously optimistic. Some of them even hope that by looking at mannequins from a distance, mistaking them for cops, will stop people from using their mobile phones will driving and jumping signals. As crazy as this can be, we must admit that Bangalore is one city where the citizens and the law enforcers are at their creative best. From one citizen using 3D art and video to bring to attention the potholes in the city, to the traffic cops, using mannequins to curb traffic violation, Namma Bengaluru is truly at its creative, efficient best. Speaking about efficiency check out 16 Best Disabled Friendly Restaurants In Bangalore For 2019