Go For A Swim In This Pool At The Gevora Hotel, World’s Tallest Hotel In Dubai 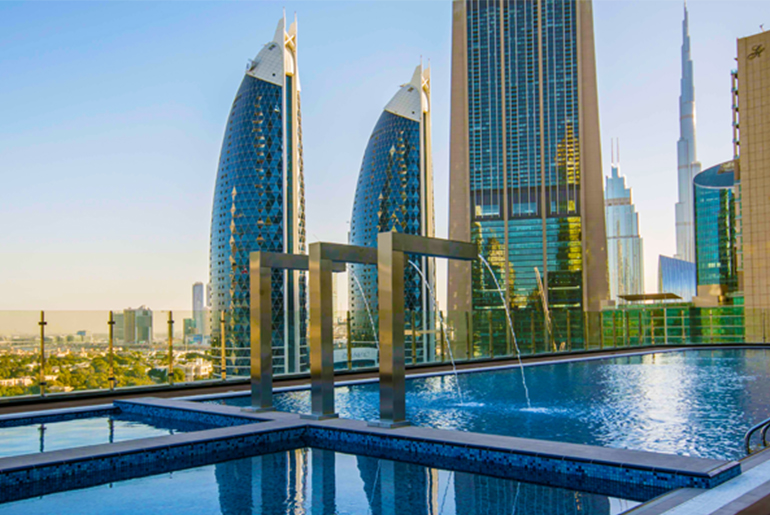 You can now dive into the pool of the Gevora Hotel, Dubai and take in the breathtaking view of the city as the sun sets on the horizon.

We know the temperatures are soaring but we got some good news to cool you off this summer! We recently told you that you can visit the world’s tallest hotel in Dubai for just Dhs 100 and now you can take a dip in the hotel pool.

With majestic views of the Dubai skyline, the massive pool deck is the perfect oasis in the bustling city. The open-air pool deck is located on the 12th floor of the 75-storey hotel, and is 25 metres long, and even has a four-metre children’s pool for the kids. Dip yourself in the pool for just Dhs150 on weekdays and Dhs 200 on weekends, which also includes access to the rooftop viewing deck of the hotel. Now isn’t this really affordable?

Also Read: Did You Know You Could Pay For Your Taxi In Dubai Using Your Smartphone? At 356 meters, Gevora is just one meter taller than JW Marriott Marquis in Business Bay, which previously held the record for the world’s tallest hotel. Gevora Hotel is more than three times taller than Big Ben, 56 meters taller than the Eiffel Tower, and around equal to the length of three football pitches.

Also read: 3 New Food Joints To Dine At This Weekend In Dubai