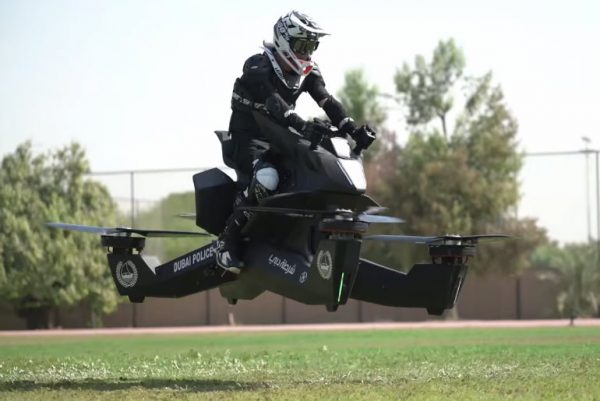 The Dubai Police are training on brand new ‘flying motorbikes’, set to take to the skies by 2020.

The Dubai Media Office revealed in a video, the new ‘flying motorbikes’ driven by the Dubai Police. Several officers are already being trained to use the Hoversurf Scorpion-3 hoverbike which will be spotted in the skies of Dubai by 2020. The new crime-fighting flying bike has been introduced with the aim of enhancing the force’s rapid response during emergency situations & heavy traffic. The Scorpion 3 is a four-rotor hoverbike made by California-based company Hoversurf & weighs 114 kg. Due to its compact size, the bike can take off and land in any regular parking space. It can fly at five meters height with a maximum speed of 96 kmph (60 mph), according to the requirements of the law. The bike can also fly without a pilot while being controlled by an operator. We can’t for so all the cool next gen stuff coming up!

Get Benefits Of ₹42 Lakhs From The Japanese...