Our work and no play makes Jack a dull boy. Well, this just doesn’t apply to us, humans. Apparently the elephants at Madhya Pradesh’s Kanha forest also got a week-long vacation. Kanha Tiger Reserve (KTR) deploys sixteen elephants for carrying out different forest-related tasks including patrolling. The elephants got a break from their routine work. And enjoyed a week-long holiday of pampering. They were also fed their favourite food of jackfruit, coconuts, bananas and sugarcane.  According to an official on August 16, the rejuvenation for elephants is part of a 12-year old tradition of the KTR. It’s a thanksgiving tradition for the gentle creatures for their tireless service.

The elephants at Madhya Pradesh’s Kanha forest enjoyed a week-long holiday as part of the 12-year old tradition of KTR. They ate their favourite food at the rejuvenation camp. KTR field director L Krishnamurthy informed PTI, “These tuskers help us in different tasks like patrolling, tiger tracking and averting man animal-conflict all the year-round. So this camp is our thanksgiving gesture to them for their toil.” The officials brought together 16 elephants from four corners of the reserve. It’s spread over 940 sq km to encourage socializing among the tuskers. Recently, Sunderbans Tiger Reserve reopened for tourists with safety measures. 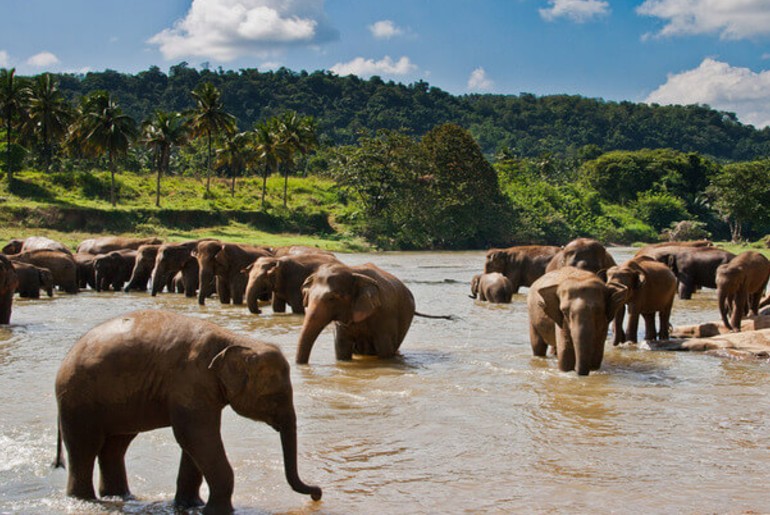 Elephants Were Given Massages, Favourite Food & Baths During Rejuvenation Camp

As part of the camp, the elephants ate their favourite food including jackfruit, bananas, coconut and jaggery. They also enjoyed taking dips in the water bodies and getting massaged by the mahouts. The official said to PTI that they literally pampered the elephants at Kanha forest for a week as they are part of their family. The elephants enjoyed the pampering to the fullest. Apart from fun-filled activities, the officials conducted a health check-up of the pachyderms. According to Krishnamurthy, the camp also helps strengthen the bond between the elephants and their mahouts. Meanwhile, wander into the jungle of Kanha through our video below.