From 1989 onwards that Puducherry’s pristine beach started disappearing due to rampant sea erosion. Thirty-two years later, the beach has now returned on the southern side. The construction of the harbour, with a wall projecting into the sea, blocked the movement of sand. The harbour had already eroded an estimated 10 km of beach sand but the pristine beach has now reappeared in Puducherry’s coastline.

Meanwhile, black chunks have been recently spotted on the beaches of Goa, which fishermen, water sports operators and experts are speculating to be ‘imported coal’. Tourists and locals found the dark particles on Benaulim beach in South Goa and Querim beach in North Goa. According to reports, Claude Alvares,  the Director of Goa Foundation said that the coal made its way to be Goa beaches due to the primitive ‘loading and unloading operations’ at Mormugao Port. Goans had also led out protests against the coal project threatening biodiversity.

Imported Coal Spreading Out To The Goa Beaches

The Goa government had banned cooking in open places a few days before to keep the beach destination clean. But now, dark particles, suspected to be coal are washing up the Goa beaches. Locals and experts are assuming that the imported coal handled by primitive methods at the Mormugao Port is spreading out the beaches. A Hindustan Times report stated that nearly 12-14 million metric tons of coal used to be imported from Australia and Indonesia via MPT. The amount got reduced to 9-10 million metric tons this year.  As a result of the loading and unloading of coal by primitive methods, the wind carries away the coal dust to the neighbouring Vasco Da Gama town, the beaches and even the water bodies.

Also Read: Bask In The Splendid Views Of This Little-Known Butterfly Beach In South Goa

According to the Hindustan Times report, Pele Fernandes, a water sports operator from Benaulim beach, said, “We noticed it yesterday for the first time, the black particulate matter that was different from the tar balls.” He added that he did not convey the information to the tourists fearing that they would not visit the beaches again. Meanwhile, the Chief Minister of Goa Pramod Sawant has pledged to reduce coal handling at MPT by 50 percent. In his statement, Sawant said, “I assure you coal import and handling will drop by 50 percent. We will reduce coal and are in the process of stopping it as soon as possible. We cannot stop it altogether. Industries are on for 40 years.” 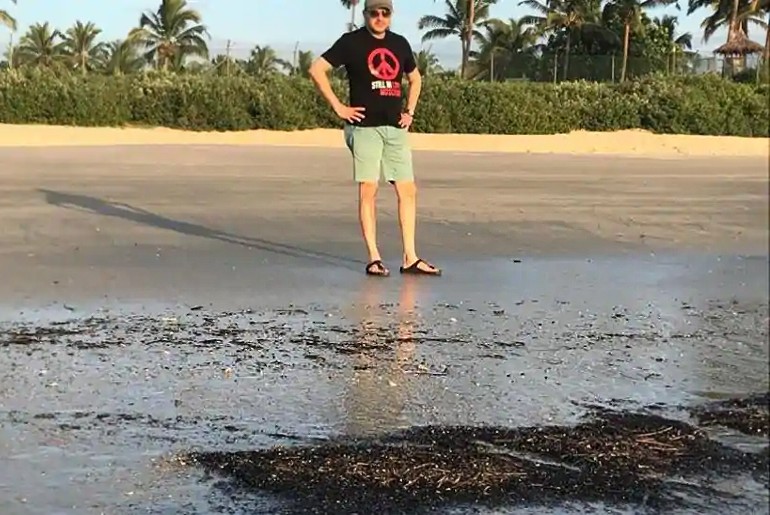 Protests ensued in Goa against the expansion of railway line to increase coal-carrying capacity from Mormugao Port. Gaons led out two movements recently called Save Mollem and Goyant Kollso Naka (We don’t want coal in Goa). However, the government has said, “People think double-tracking is being done for coal. We are creating infrastructure for passengers and other commodities too.” Meanwhile, here’s how Kamiya Jani explored Goa during the pandemic: