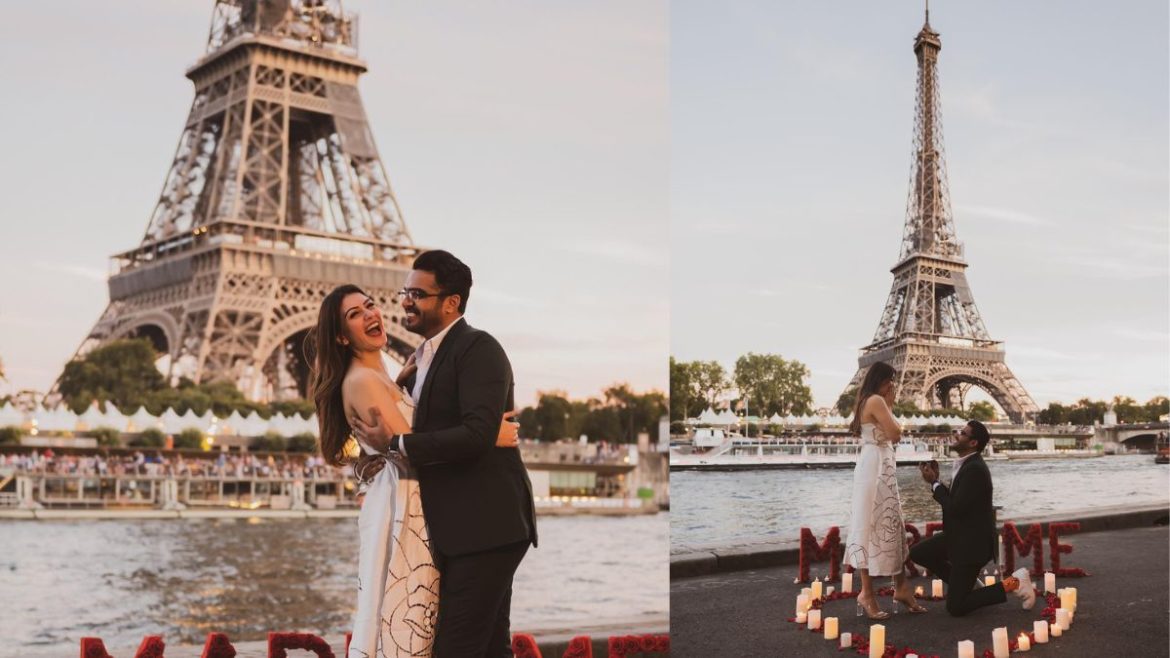 Indian actress Hansika Motwani some time ago announced her wedding on her Instagram account. Ever since then many news stories have been doing rounds on social media talking about the ceremonies and destinations. Fans are getting more and more curious to know who the mystery groom is and where the wedding will be. Amidst all this chaos on social media, the actress posted pictures from her wedding proposal at  Eiffel Tower. Check this out.

Hansika Motwani’s fans were awaiting the moment when the actress would share her proposal pictures or videos. She finally posted them today. Hansika’s boyfriend proposed to her with a ring right in front of the Eiffel Tower in Paris. We know many of you girls must have dreamt of a proposal in Paris but the actress witnessed it.

Her boyfriend Sohail Kathuria went down on one knee holding her hand to propose. They stood in a heart shape sign made out of white candles and rose petals. The pictures look straight out of a dream with the stunning Eiffel tower in the background. The couple’s friends joined them there after the wedding proposal.

Hansika’s wedding is the new hot topic in the town. Her boyfriend Sohail Kathuria is a businessman from Mumbai. The two were close friends and also business partners before they decided to date and now marry each other. There is news saying that the couple will tie the knot on December 4th in the evening.

On the work front, the actress will be soon seen in Manoj Damodharan’s Partner. She will also be seen in a science fiction drama named Aadhi. Hansika has also bagged ‘My Name is Shruti’ which will be directed by Srinivas Omkar. Her OTT debut is also around the corner with MY3.

Also Read: Hansika Motwani To Get Married In December At This Stunning 450-Year-Old Jaipur Fort

Wishing the couple all the love and happiness!