In 2020, India’s first seaplane was launched between Gujarat’s Sabarmati Riverfront and Statue of Unity. And now, an aircraft taxi service has come up in India too. Haryana CM Manohar Lal Khattar inaugurated India’s first small aircraft taxi service which will operate between Chandigarh and Haryana’s Hisar.  The total time to cover the distance between the two places will be around 45 minutes and the price per seat is ₹1755. Air Taxi Aviation Company is operating the service and the air taxis have a total of four seats. One seat is meant for the pilot and the other three for the passengers.  Read on to know more. 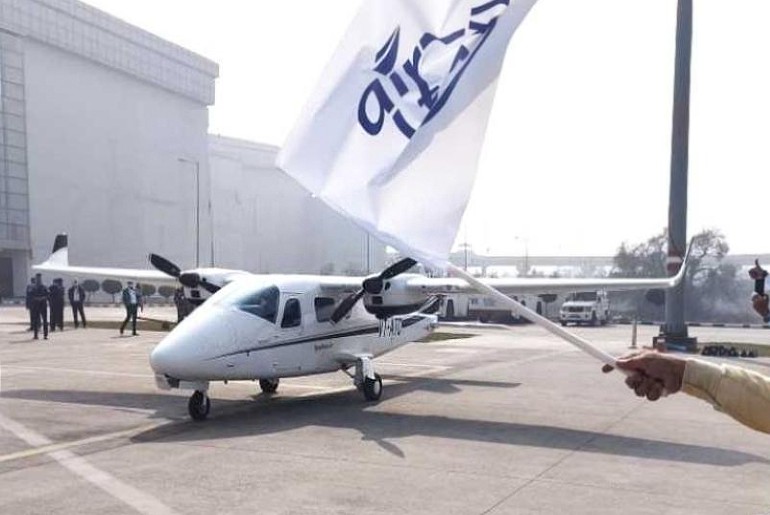 Also Read: Kandivali Man Builds An Aeroplane On The Terrace Of His Five-Storeyed Mumbai Building

Under the UDAN scheme of the Central Government, India’s first small aircraft taxi service has been launched between Chandigarh and Hisar by Haryana CM Manohar Lal Khattar. The Airports Authority of India has shared a post on Twitter, stating, “Haryana CM Sh. Manohar Lal Khattar flagged off the first flight from Chandigarh as part of the inauguration of India’s First Air taxi Service from Chandigarh-Hisar Airport under the Regional Connectivity Scheme RCS-UDAN. In another Tweet, it stated, “Aircraft used for the Chandigarh-Hisar #AirTaxi service is a twin-engine three-seater plane. Airfare for this service is ₹1,755. The travel time between Hisar to Chandigarh has dropped to 50 minutes while it takes 5 hrs by road.” Also, you’ll soon be able to travel to Mumbai, Delhi and Surat on a seaplane.

Aircraft used for the Chandigarh-Hisar #AirTaxi service is a twin-engine three-seater plane. Airfare for this service is ₹1,755. The travel time between Hisar to Chandigarh has dropped to 50 minutes while it takes 5 hrs by road. For more details visit – https://t.co/1kiPk7wM1F pic.twitter.com/F8IqpEIfbl

Also Read: Wow! This Car Can Transform Itself Into An Airplane In Just 3 Minutes

Similar Services Might Start To Dehradun, Dharamshala, Kullu And Shimla

Each air taxi will have three seats for passengers and one seat for the pilot. There will be one scheduled flight on each day and it will take off even if there is one passenger. Also, the authorities are planning to start similar air taxi services between Hisar and Dehradun from January 18, 2021. Services might come up between Hisar and Dharamshala too on January 23. Air taxi services might start to some other places too like Kullu and Shimla. These air taxis will make travelling to the Himalayan destinations swifter, comfortable and hassle-free. Meanwhile, did you know about this bus that can turn into a boat?