I Travelled To Nepal For 9 Days In Just ₹21,000 All Inclusive Home to the exalted Mt.Everest and other Himalayan mountains, Nepal is an ideal destination for budget travellers, explorers and culture vultures. Known for its diverse landscapes, deep canyons, throbbing culture, palatable food and warm people, Nepal is different from other countries I’ve toured so far. Being budget-friendly, it has an array of things to offer that goes beyond its snow-clad mountains. It is one of those countries that is awe-inspiring and diverse, yet is spiritual and hip in its way. And to explore the serenity of Nepal, I visited this country with a friend for just ₹21,000 per person.

Your Guide To Visit Nepal On A Budget

Transport: My trip to Nepal started from Kolkata. We boarded a train from Howrah station to Raxaul, and the train ticket cost us ₹2000 return per person. From Raxaul, we entered the border town of Nepal – Birgunj on a cycle rickshaw, and it cost us ₹100 per person. From there, we took a shared tourist cab for Kathmandu, and the cab fare was ₹800 per person. We also travelled to Pokhara from Kathmandu and paid ₹500 per person for the shared cab ride. Apart from this, we spent ₹4000 per person on cabs, and buses to travel in and around the country.

Tip: Nepal has a plethora of transport options for tourists. So if you are on a budget, you can always use buses to traverse around. The bus is not only cheap but an efficient option too.  We travelled mostly in buses and used cabs only a few times.

Visa: Nepal offers visa-free entry to 17 countries, and India is one of them. We didn’t have to pay anything for the permit and just had to show our voters id for identity verification while entering the country.  Note: Carrying a passport is not mandatory, but if you don’t have a voter id then you must carry a passport since Aadhar Card is not considered as a valid identity proof in this neighbouring country.

Stay: Nepal is known as a backpacker’s paradise, and hence the country offers a lot of budgets stay options. For our stay, we chose Zostel for both Kathmandu and Pokhara. Zostel is not only known for its affordable pricing but is also known for its locations. Zostel Kathmandu is located right in the heart of the city – Thamel, and for 4-nights and 5-days we paid ₹2000 per person. For Pokhara, we paid ₹1500 per person for 3-nights and 4-days. The stay in total cost us ₹3000 per person.

Also read: The Highest Irish Pub In The World Is Located At Namche Bazaar In Nepal At 11,290 Ft

Food: You can experiment a lot with food in Nepal. Being famous for its lip-smacking momos and thukpa, Nepal has a lot of picturesque cafes to offer, and all of them are reasonably priced. We spent ₹8,000 per person on food for 9-days. 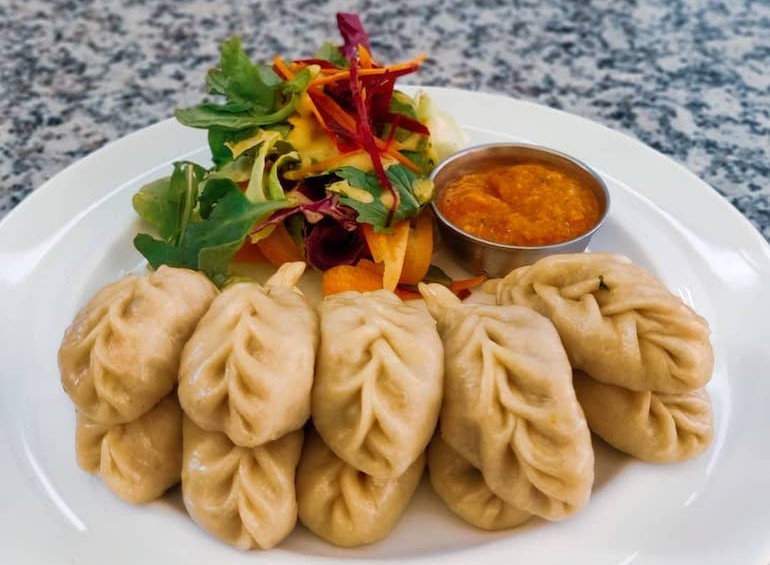 Tip: While momos are undoubtedly famous in Nepal, the national dish of this Himalayan country is dal rice. So whenever in doubt, have some soul comforting dal chawal.

Miscellaneous: Apart from this, we spent additional ₹3000 per person on entry tickets for some sites.

Best time to visit: If you are a hiker and want to go for a trek, then September to January is an ideal time to visit Nepal. But if you are planning to visit only for tourism, then visiting between October to March is a viable option. With pleasant weather and less humidity, manoeuvring around becomes easy. We visited in November 2019, and I must say the cold weather and faint rays of the sun made travel super convenient.

After 15-hours of a train ride and 7-hours of the cab ride, the cold breeze of Kathmandu welcomed us at dusk. We checked in the hostel at 8 pm, interacted with our fellow hostellers and called it a night by dining at the hostel’s cafe.

We woke up at dawn, grabbed a bite and ventured out to explore the mighty Kathmandu. One of the most enjoyable things about Kathmandu is that it has a diverse mix of temples, sites, shrines, restaurants and bustling streets. 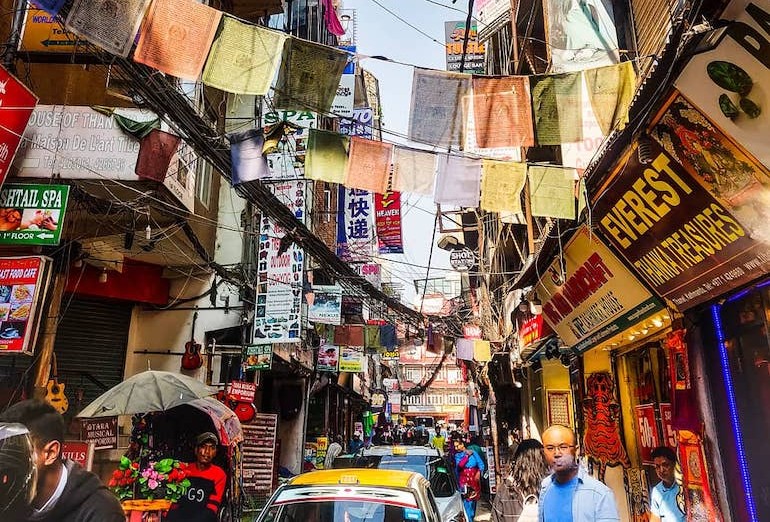 We started our trip by exploring the most famous area of Kathmandu – Thamel. Known as Nepal’s no.1 backpacking district, Thamel has plenty of souvenir shops, galleries and cafes to offer. After spending a few hours in Thamel, we made our way to the iconic Kathmandu Durbar Square. The majestic Durbar square has age-old temples, and each of them is known for its intricate design. Note: An admission ticket to Durbar Square will admit access to all the temples in the square, as well as Hanuman Dhoka, but that only lasts for a day. The admission fees are reasonable, and this place is a must-visit for photographers. 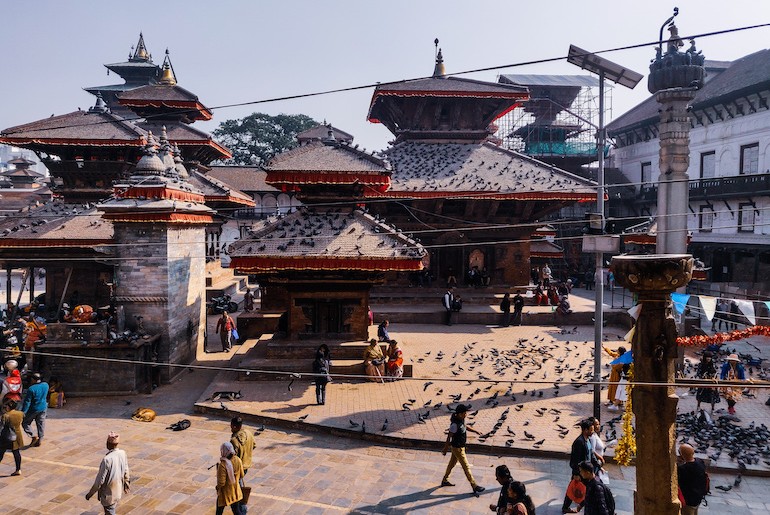 After spending some time at the Durbar Square, we visited Cafe Mitra & Lounge, which is not only known for its momos but is also known for its European ambience. From there, we headed to the Garden of Dreams. It is a place that provides a perfect getaway from the hustle and bustle of Kathmandu and is at a walking distance from the durbar square. And from there, we headed back to the hostel for some rest! After chilling in the hostel for a while, we left at 8 pm to explore the famous freak street of Kathmandu. We visited a few clubs, ate good food and enjoyed the nightlife the capital city had to offer.

After spending almost two days in Kathmandu, we finally decided to explore some spiritual areas of this place. On day three, we visited the opulent Boudhanath Stupa, which is also one of the largest stupas in Asia. We caught a bus from Thamel for the Stupa and spent a few hours admiring the beauty of the place. Once done, we grabbed some lunch at a local cafe and then visited the majestic and the most sacred place for Hindus – Pashupatinath temple. We didn’t go inside the main temple since the queue was quite long; however, we made sure to cover the entire temple area on foot. Note: Only Hindus are allowed to visit the temple, and one has to pay an entry fee to enter the shrine. 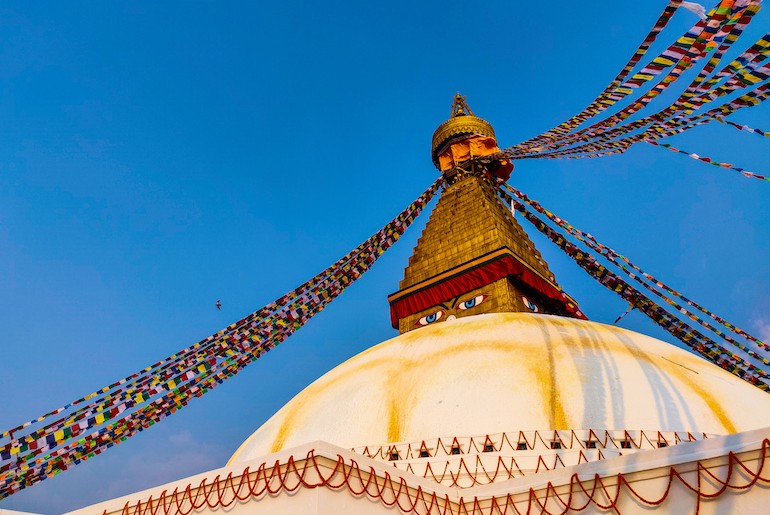 Also read: Lama’s Kitchen Is A Hidden Gem For Nepalese Food In Delhi

The small shops, the classic architecture of the temple and the ambience was not only pleasing to the eyes but was also gratifying to the soul. After the temple, we visited another important and must-visit place in Kathmandu, and that is the serene Kopan Monastery.

We finished touring the religious sites in the day and, at night, we visited the famous Fat Monks Rooftop Bar, which not only served great food but the traditional Nepali music and ambience, made the place look even better.

This was our last day in Kathmandu, and we wanted to make the most of it. So we started our day by savouring some momos from Yangling – a Tibetian restaurant which is also the most famous eatery in Kathmandu. Post that, we boarded a bus for Chandragiri Hills. 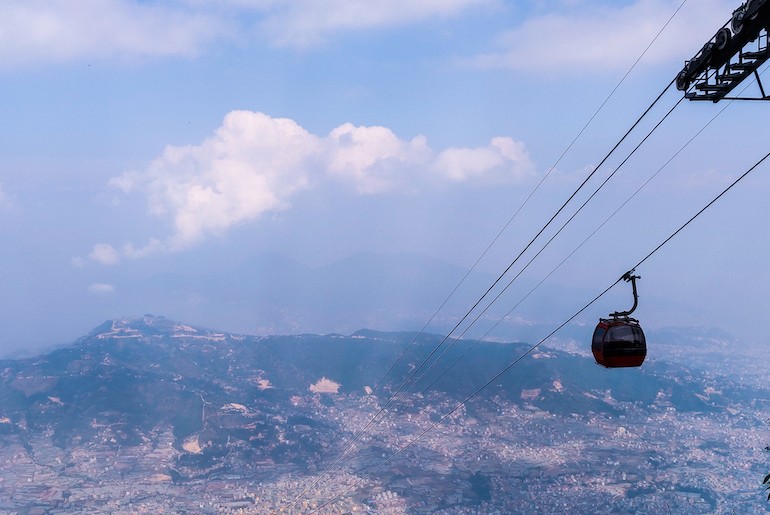 Located in Thankot, Chandragiri Hills is known for its two and a half kilometres cable ride. The view of the majestic mountains from the top is quite surreal. After spending 2-3hours at the place, we decided to have lunch there. We ate green momos and sipped on some coffee at Bar@2520 which offers a spectacular view of the mountain ranges. Post that, we visited Asan Tole – a famous local market of Kathmandu. After enjoying throughout the day, we headed back to the hostel and called it a night by hanging out with fellow hostelers.

After spending four unforgettable days in Kathmandu, it was time to head to another beautiful city in central Nepal- Pokhara. Known as the start point of the Annapurna Circuit, Pokhara was a mellow version of Kathmandu. We took a shared cab and reached Pokhara at twilight. We checked into our hostel, explored the area and relished some local cuisine at a nearby cafe. 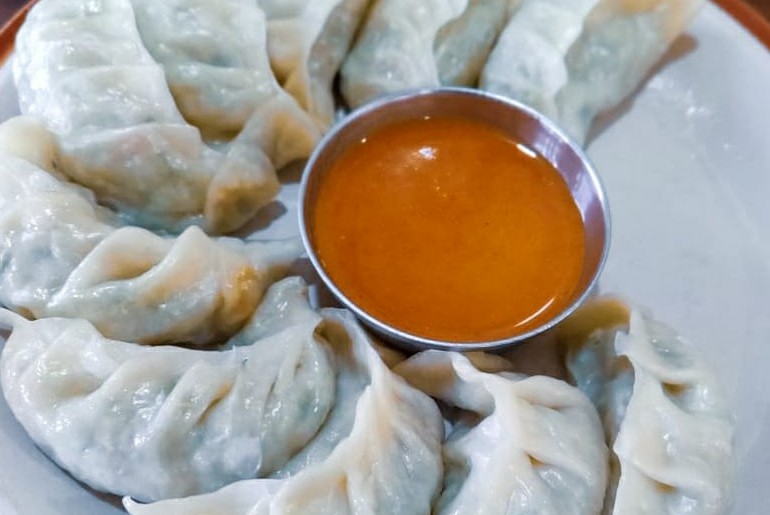 The weather in Pokhara was a bit misty, and the morning was pleasantly cold. We got ready and headed out to explore this beautiful town. We started our day by enjoying a delectable breakfast at Krazy Gecko cafe, which is not only known for its delicious food but is also known for its unique seating and beautiful view of the lake. After having a filling meal, we visited the iconic World Peace Pagoda (Shanti Stupa). 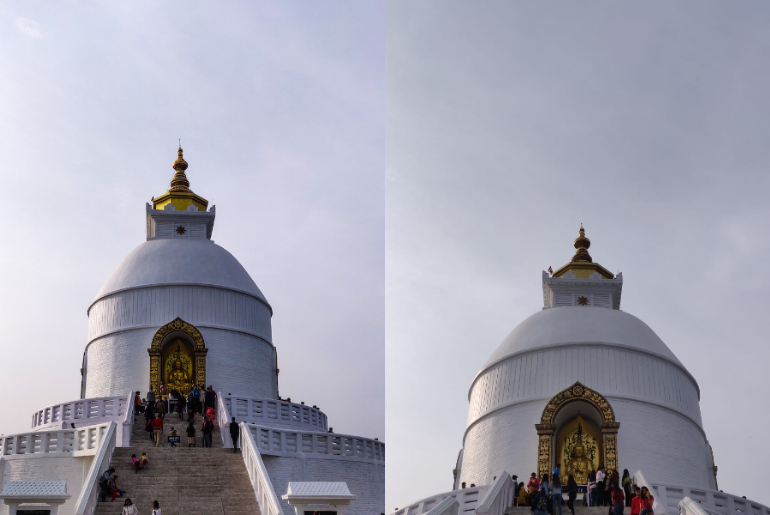 We took a local boat from Begnas lake to get on to the opposite side of the lake. From there, we hiked through the beautiful forest, and after 2 hours we finally made it at the top. We spent an hour at the Stupa and then made our way back to the base. By the time we came back, it was already 4 pm, so we decided to take a boat ride on the Phewa lake and enjoyed the sunset while sipping on some coffee. Post that, after building quite an appetite, we visited the famous Olive Cafe and called it a night by savouring some yummy pizzas.

We started our daily early by visiting Pokhara’s iconic lake- Phewa, which is known for its natural beauty. And after walking by the lakeside, we savoured some healthy breakfast at The Juicery cafe. We then explored the market area of Pokhara and shopped for a while. Post that, we stopped for a coffee break at the legendary Himalayan Java Coffee. By then, it was 3 pm; we then started our hike to Sarangkot hill. 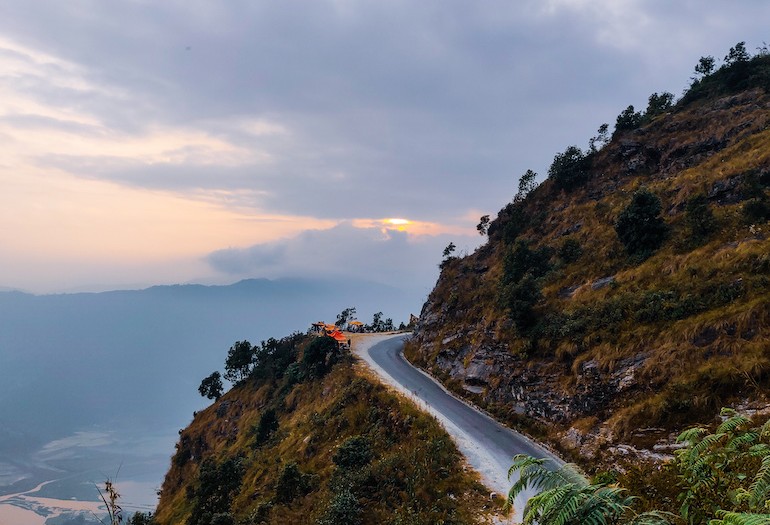 Today was officially our last day in Nepal. We packed our bags, got ready and explored the beautiful streets of Pokhara for the last time. My friend and I visited a plethora of cafes and gorged on some great food before bidding goodbye to this enchanting country. Post this, we also visited Pokhara’s Disneyland and spent some time there. It was finally 8 pm, and we caught our bus for Birgunj. 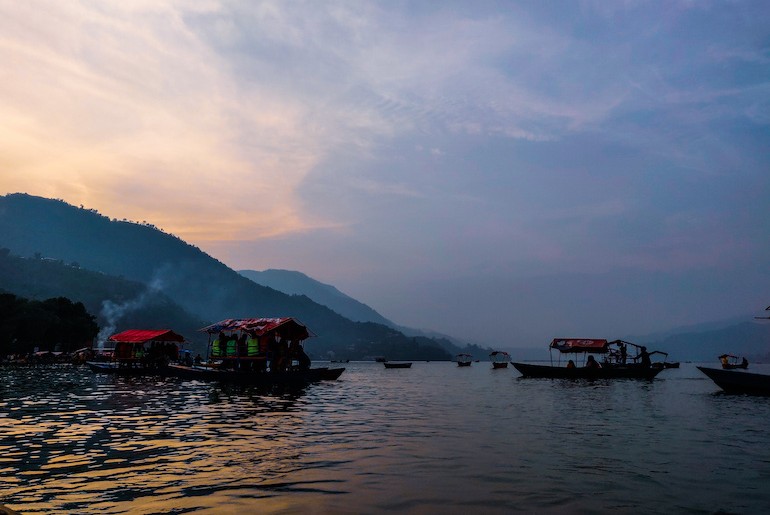 We reached Birgunj at 6 am and crossed the border to board our train for Kolkata. And finally, after 15 hours of the train ride, the foggy weather welcomed us to Kolkata. 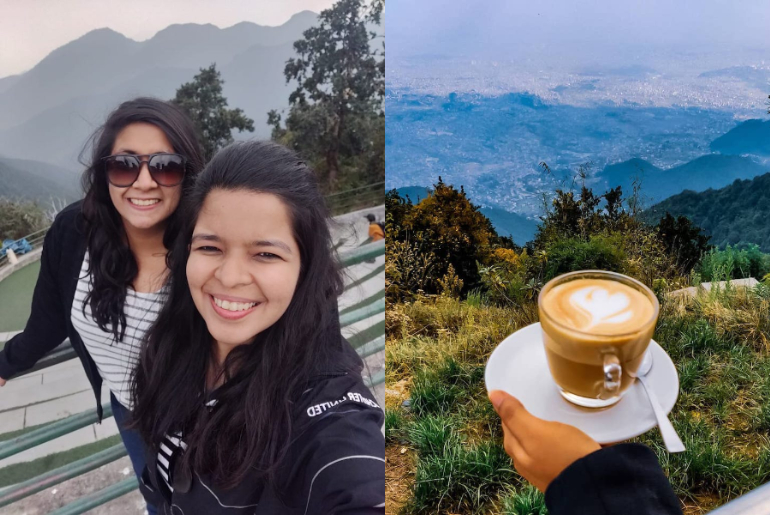 Things I missed out on but you shouldn’t: Pokhara is known as one of the top five commercial tandem paragliding locations in the world, but we had to skip it because of unfavourable weather conditions. However, you must add it on your list. Apart from that, if you want to splurge a bit more, then considering taking a helicopter Everest ride too.