Indian Family Steals Accessories From Bali Hotel, Gets Caught By The Hotel Staff 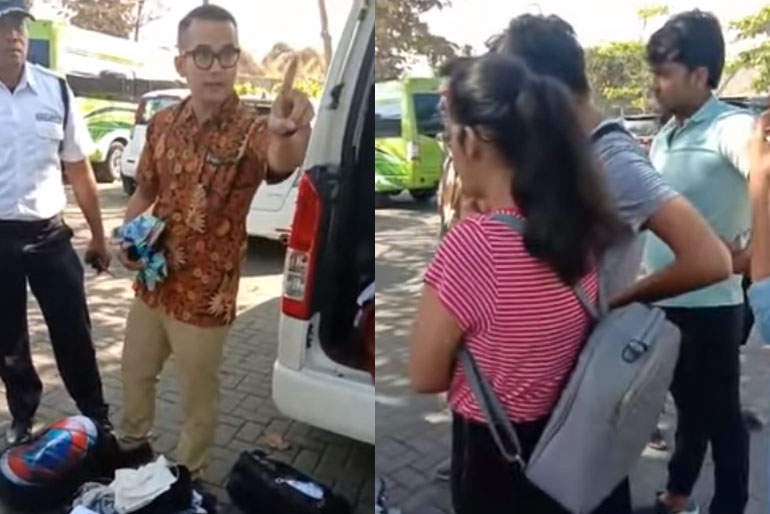 The family took accessories like hangers, hotel mirrors, soap dispensers, hairdryers, towels, toiletries, decorative items, electronics and more. The hotel staff found a lot of items missing from the room after the family checked out.  In the video, we can see the hotel staff vigorously going through their bags and speaking to them.

Also Read:  Spend A Night Under The Stars At The Bubble Hotel, Bali

The Indian family is seen apologizing constantly after they were caught. We also here a woman saying ‘Please don’t call the cops’ and that they are very sorry and they can charge for all the items that were taken from the hotel room. The outraged manager and staff strictly asked them not to yell and talk properly. The hotel manager said, ‘ I know you have a lot of money, this is no respect.’

Also Read:  A Moment from Bali…

This 2:20 minutes long video was sparked a lot of anger and criticism by Indians. This video was shared initially 0n twitter by a man named Hemant who captioned it saying, ”This family was caught stealing hotel accessories. Such an embarrassment for India. Each of us carrying an #IndianPassport must remember that we are ambassadors of the nation and behave accordingly. India must start canceling passports of people who erode our credibility.”

This family was caught stealing hotel accessories. Such an embarrassment for India.

Each of us carrying an #IndianPassport must remember that we are ambassadors of the nation and behave accordingly.

India must start cancelling passports of people who erode our credibility. pic.twitter.com/unY7DqWoSr

Further, he commented on the post saying the Indonesian people hold Indian tourists very high and it is gutwrenching to see us in a compromised position.

Also Read: Everything You Need To Know Before You Head To Bali!

I understand this happened in #Bali. Having lived in Indonesia & visited Bali, I can personally vouch for Indonesians being the gentlest, most respectful people I have met. They hold India & Indians in very high esteem & its gut-wrenching to see us in such a compromised position.

Celebrities and citizens have also shared this video and believe that it is a disgrace. Some people have also gone overboard and said that their passports should be cancelled and they should be sent to jail.

The worst example of entitled indian travellers who are a disgrace to the image of our country. Casually stealing hand washes, room artefacts, hair dryers from a hotel room in Bali. And the uncle pawing the hotel person at the end is just ? pic.twitter.com/UONwWCKmUq

How outraged are you?