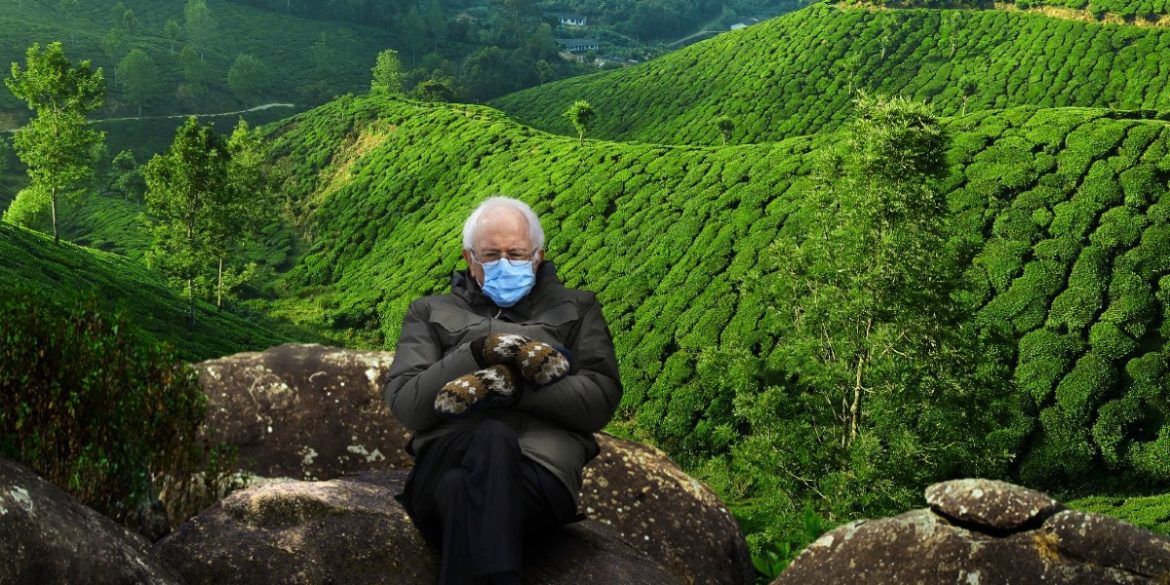 Bernie Sanders memes have taken the internet by storm. From his residence in the USA, Sanders has travelled all across the world wearing his short borwn overcoat and iconic brown and white mittens, thanks to social media. He explored the Taj Mahal, sat with Jay and Veeru on the motorcyle in Sholay and even picnicked with actress Priyanka Chopra Jonas and family. Now, Kerala Tourism joined the meme bandwagon. It used the US politician’s viral photo and photoshopped it all the way to the cascading lush green tea gardens on Munnar. So, let Bernie Sanders urge you to wear your warm clothes, mittens and visit Munnar. Read on to know more.

Bernie Sanders Invites You To Chill In Munnar

While most people attended Joe Biden’s Inauguration putting their best fashion foot forward, Sanders opted for a humble attire. He wore a short brown overcoat and brown and white mittens. Seated alone with his arms crossed, the US senator’s picture took the internet by storm, and became fodder for hundreds of entertaining memes. Kerala tourism infact welcmed all tourists to its iconic hill station, Munnar with the viral picture of Bernie Sanders. It captioned the picture as, “Wear your warm woollen mittens and enjoy the cool crisp Munnar weather!”

Also Read: This Kerala Woman Rebuilt Her Chips Business With Just ₹100 After A Robbery

In the viral picture, the 79-year-old US poilitican can be seen sitting on a rock near the kush green plantations of Munnar. This Kerala tourism tweet garnered over 14,000 likes on social media. And left the internt in splits. Many memers also gained inspiration from this meme and photoshopped images of Bernie Sanders by the Taj Mahal and other tourist spots in the country. Infact, his crewneck sweatshirt became so popular, that it’s actually featured on sale in the US for ₹3,288. That’s not all, it hilariously got sold out within minutes of being on sale. Meanwhile, here are amazing reasons why you must visit Kerala.