Ladakh, Himachal To Witness High Temperatures By 2030 Due To Climate Change: Study

The impacts of climate change have become too visible to brush them under the carpet. As an impact of climate change colder terrains such as Ladakh, Jammu and Kashmir, Himachal Pradesh, and Uttarakhand are likely to witness higher temperatures over periods of 2030, 2050, and 2085. It is reported by a study conducted by The Forest Survey of India (FSI) in collaboration with the Birla Institute of Technology and Science (BITS) Pilani, Goa.

Auli, Sissu, Munsiyari, Sandakphu And Ladakh Are Covered With Snow

India is experiencing winter in full swing now. With the sharp dip in temperatures, several hill stations in the county have started receiving snowfall too. So, if you’re a snow lover, this is the perfect time to plan a trip to one of these places, albeit taking all precautions. Mountain destinations that are getting snow blanketed now include Auli, Sissu, Munsiyari, Sandakphu, Ladakh, North Sikkim, Gulmarg, Sonmarg and Pahalgam, among others. According to reports, snowfall has been witnessed in Meghalaya’s Shillong too this year. Now, medium to higher stretches of Himachal Pradesh are getting fresh snowfall too. In Keylong, the temperature dropped to around -4 degrees.

Meanwhile, some roads also got blocked due to massive snowfall. In East Sikkim, 1027 tourists in 120 vehicles got trapped on Christmas day, across a stretch of around 15 kilometres. The army personnel rescued them, offering them food, warm clothes and medical support.

More Than 1000 Tourists Get Stuck In Sikkim Due To Thick Snowfall, Army Comes To Rescue

Around 1027 tourists in 120 vehicles got stranded in East Sikkim on Christmas day, across a stretch of around 15 kilometres. Upper expanses of Sikkim like Nathu La, Changu Lake and nearby areas witnessed heavy snowfall on December 25. The mercury in these regions dipped to sub-zero levels. Sikkim’s Jawaharlal Nehru Marg got blanketed in snow and vehicles on the route started skidding. As the roads got inaccessible, the army personnel of the Black Cat Division came to the rescue of the tourists and shifted them to a military camp. Read on to know more.

A post shared by Himalayas Heaven On Earth ❤️ (@himalayancurves)

Also Read: Skip The 5 Hour Ride From Bagdogra Airport And Take Direct Flights To Sikkim From Delhi And Kolkata

The Army Shifted The Stranded Tourists To A Military Camp; Offered Meals, Warm Clothes And More

The army men shifted the trapped tourists to a military camp and assisted them with meals, warm clothes and medical support. Ahead of the winter festive week, Sikkim’s capital Gangtok and the nearby hilly town of West Bengal, Darjeeling received an overwhelming number of bookings. According to a Hindustan Times report, almost all rooms got booked till the first week of January 2022. 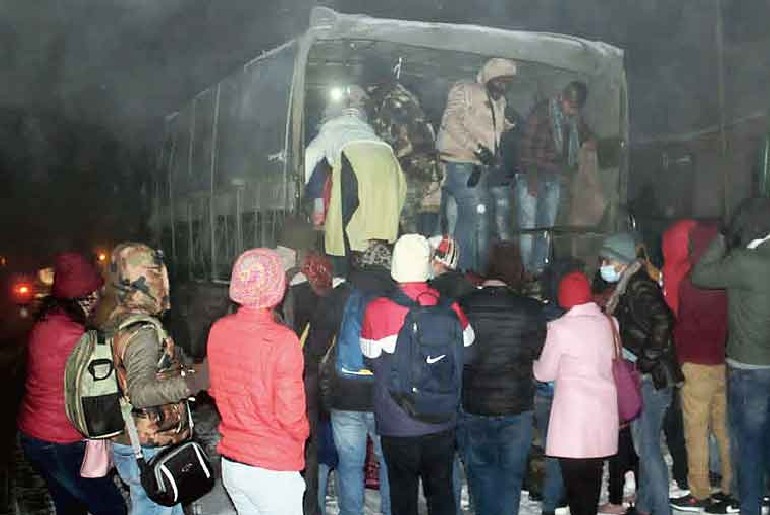 Apart from Sikkim, Darjeeling and Sandakphu also received snowfall. Sandakphu is known as the highest point of West Bengal.

Minister of Law and Justice of India, Kiren Rijiju, who hails from Arunachal Pradesh, has warned tourists about massive snowfall on roads. Taking to Twitter, he wrote that heavy snowfall has been reported in Arunachal Pradesh between Baishakhi, Sela Pass and Nuranang. He advised tourists to get proper information before moving and stated that the road is extremely dangerous to drive and the temperature is going down to -25 degrees.

Advise to tourists visiting Tawang in Arunachal Pradesh at this point of time. It is reported heavy snow fall between Baishakhi, Sela Pass and Nuranang. Pls get proper information before you move because the road is extremely dengerous to drive and temperature goes down to -25 ! pic.twitter.com/sLYM9aF4Fh

If you’re travelling to the mountains now, do not forget to check the weather conditions prior to your journey. Meanwhile, here is a list of the Permits You’ll Require To Explore Sikkim.