Ask me about a memorable Christmas and it will definitely remind me of 2017. That year, in bone-chilling December, I, with my parents, was at an altitude of over 1700 metres, in Sikkim. And guess what, we covered Gangtok, Tsomgo Lake, Temi, Namchi, Pelling, Rimbi Garden and Rinchenpong in just a span of 5 days. We travelled at a stretch, without halting for long at one particular destination. Here’s the story of my journey.

We took a flight from Netaji Subhash Chandra Bose International Airport in Kolkata at around 11:30 AM on December 24, 2017. It took 45 minutes for our flight to land at Bagdogra, Siliguri. From Bagdogra, we hired a car to reach our hotel in Gangtok, near MG Marg. It roughly took us four and a half hours to reach Gangtok from the airport. While we were inside the car, a few metres after Siliguri, the grandiose mountains welcomed us. With a crystal clear turquoise-hued lake, numerous small streams, gorges and pretty hilly hamlets, the steep road going up to Gangtok was nothing less than magical. 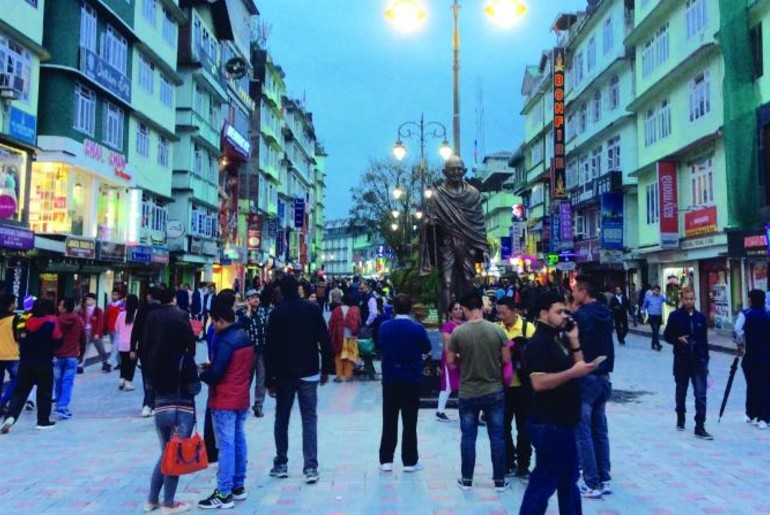 We reached our rooms at around 5:30 PM. After freshening up, we headed to MG Marg to indulge in some shopping. I got a poncho, a woollen cap and gloves for myself. We ended the day dining on authentic Sikkimese cuisine at MG Marg’s most renowned restaurant, the Dragon Wok. 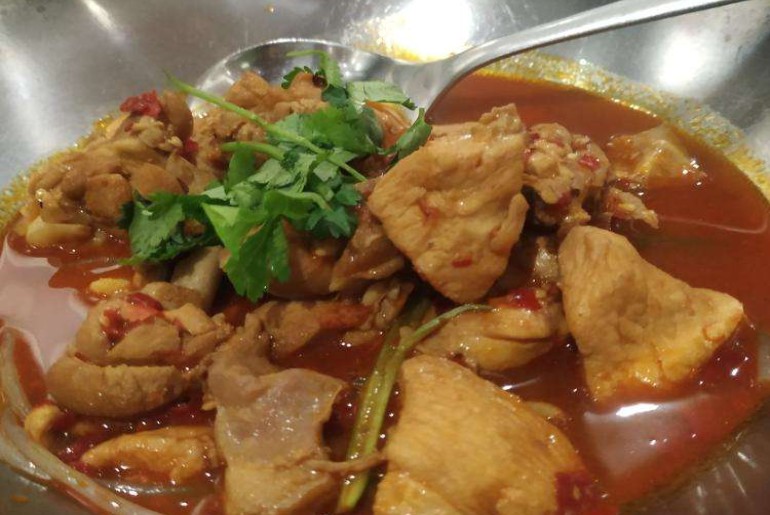 On Day 2, we started for Tsomgo Lake at around 7:30 AM in the morning. The zig-zag route leading up to the glacial lake was enveloped by chilled winds. Within an hour after leaving Gangktok, we could find ourselves above the clouds. The miniature hamlets below crisscrossed by narrow lanes and streams looked like a piece of painting. I remember, the driver tuned to a Nepali song, Jaalma, which mingled beautifully with the cloud-clad backdrop of the Himalayas. I wasn’t understanding the song but was loving it anyway. I was lost in the expanses. They seemed to be straight out of a dreamy fairytale. 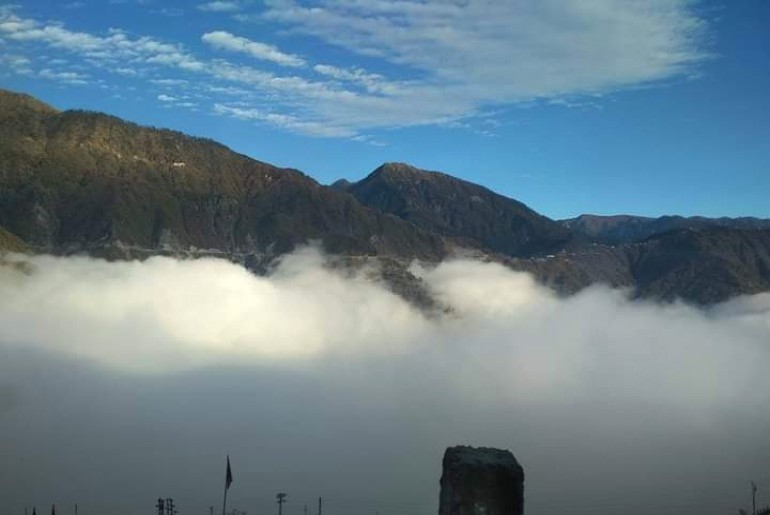 I was expecting that Tsomgo would be totally frozen since it was December. But thankfully, we could get the crystal clear view of the lake and luckily the surrounding mountains were abundant with snowflakes. 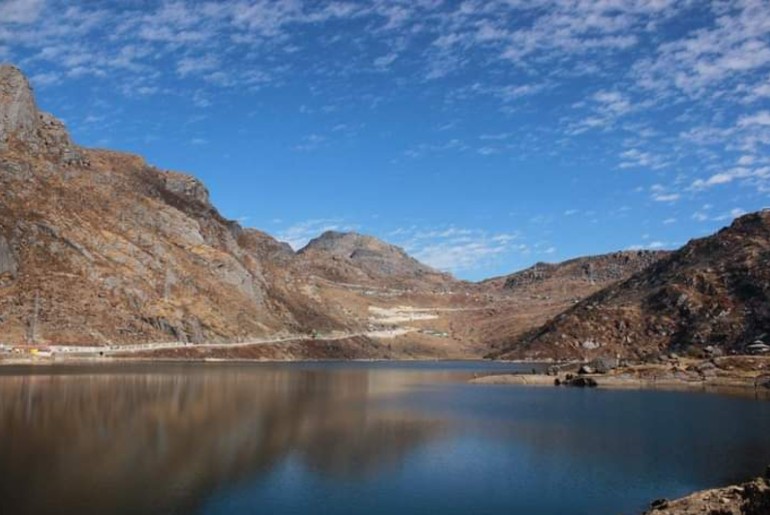 There was a little cafe hanging from the mountain, run by a middle-aged couple. The duo offered us with Maggi and chai. And the Maggi somehow tasted much better than the cities at the profound height of 3700 metres. We went a few metres above the Tsomgo Lake to explore the Baba Mandir. We returned back to Gangtok at around 7 PM and started packing our bags as the very next day we had to leave for Pelling. 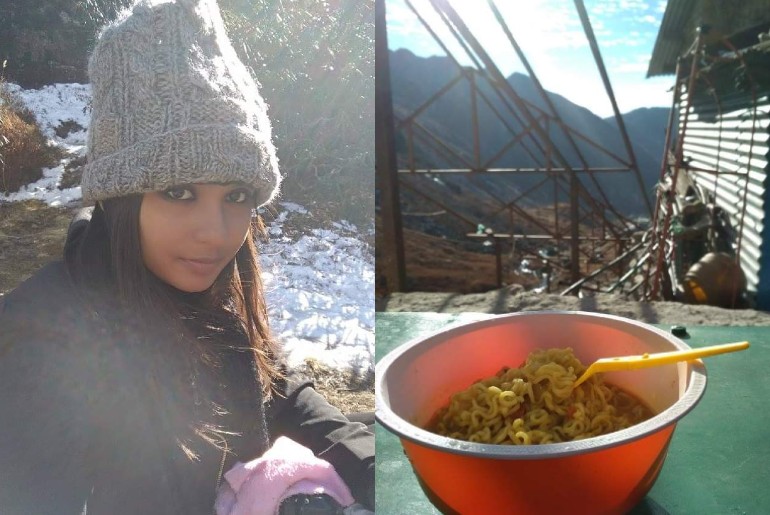 On the third day, we started at 8 AM from Gangtok. We had plans to explore other places before entering Pelling. At first, we headed to the Temi Tea Garden, which is known as one of the best tea estates in the world. The vast expanse of the lush green garden overlooked the mighty mountains that kissed the clear blue sky. Right beside the garden, there is a small confectionery store where we enjoyed some warm muffins and momos. From Temi Tea Garden, we headed to the Char Dham in Namchi. 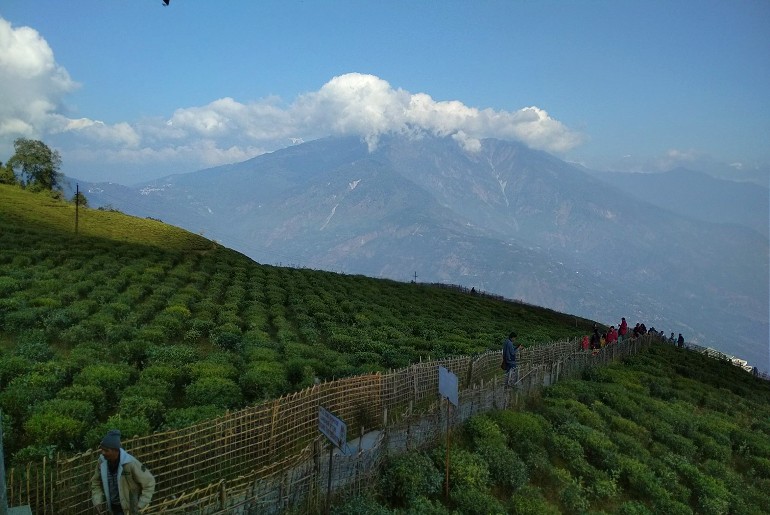 The sweeping compound of Namchi’s Char Dham is atop Solophok Hill. The picturesque complex houses a 108-feet statue of Lord Shiva. It has the replica of four shrines-Uttarakhand’s Badrinath, Odisha’s Puri, Tamil Nadu’s Rameshwaram and Gujarat’s Dwarka, along with 12 jyotirlingas. The gorgeous expanse of Char Dham, Namchi embraces fathomless serenity. 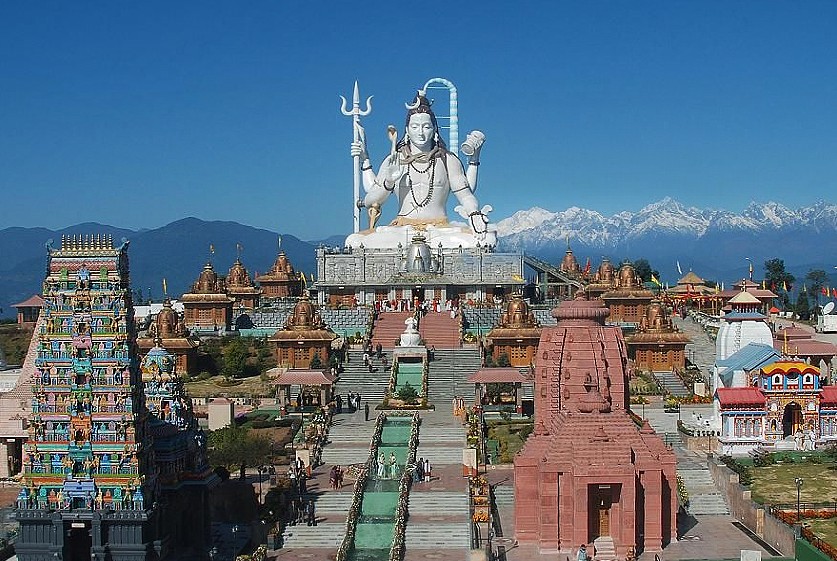 By visiting this place, anybody will be able to attain a heightened solace.  Also known as the Siddhesvara Dham, the temple compound was inaugurated in November 2011. It took us around two hours to explore the whole compound. 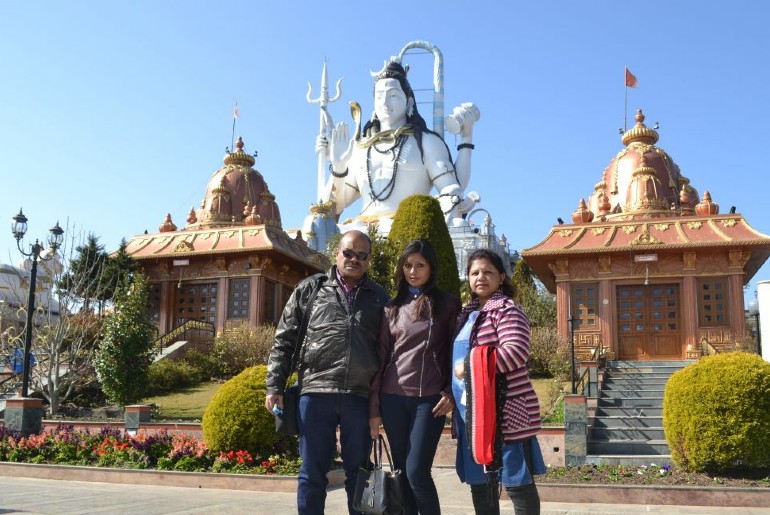 We had lunch in an adjoining eatery. After our lunch, the clock was already striking 3. The driver informed that we had to reach Pelling before sunset as the road was craggy. We had previously thought of exploring a few more places nearby, but we had to drop that plan. 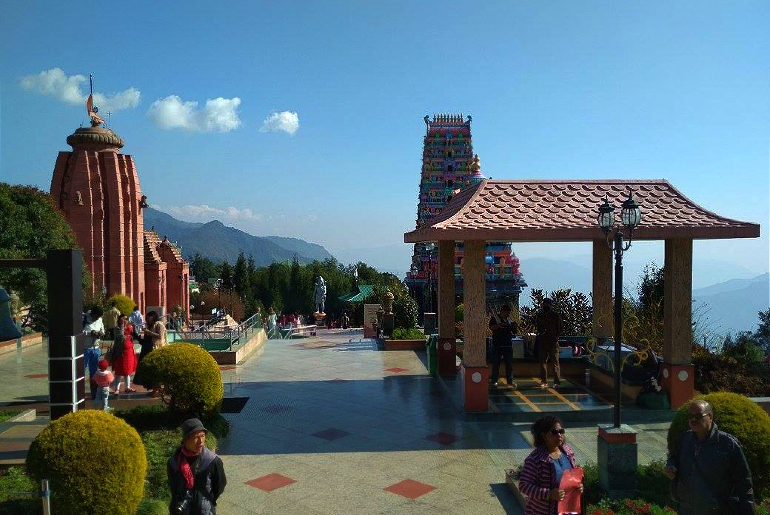 We reached our Pelling homestay in the evening and the host had decorated the place with a Christmas tree and fairy lights.

The Picturesque Views From Hotel Garuda

While elucidating about my Pelling Experience, I have to throw some light upon our homestay, Hotel Garuda. It is run by a local family and serves authentic local cuisine. We had amazing, super crispy shaphaley there. We had booked a rooftop deluxe room which had wooden walls and a separate sitting area with traditional cutlery. 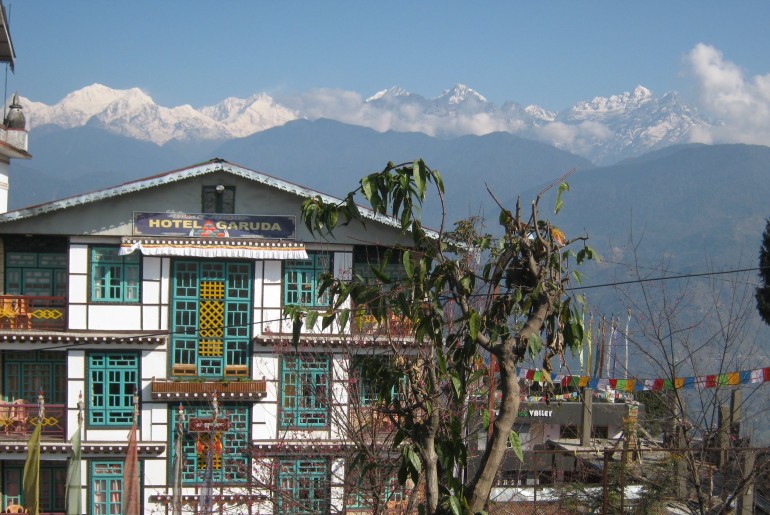 The night was uncomfortably cold. But what I witnessed in the morning got etched in my eyes forever. Half opening my sleepy eyes at around 4 AM, I saw the snowy pinnacle of Kanchenjunga, the third-highest mountain in the world, wearing the breathtaking golden hue of the morning sun. I hurriedly slipped out of the quilt and rushed out to the roof. I had never seen the Himalayas before so up and close. In one moment, the view seemed to wash off all the woes of my life. I looked down to realise that our hotel on the helipad is tucked high above the mountain. The empty roads looked misty and enchanting. 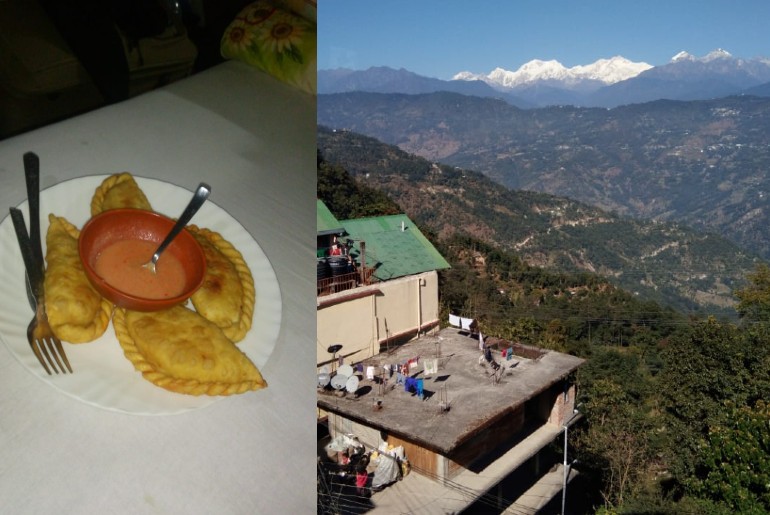 Also Read: These 7 Stunning Lakes Of Sikkim Are Sure To Leave You Spellbound

I was in no mood to leave our Pelling Homestay, but sadly we had only one night booked there. On the morning of the fourth day of our trip, we had to leave Pelling and drive down for Rinchenpong. On the way from Pelling to Richenpong, we covered the Kanchenjunga waterfall, the Rimbi Orange Garden, Khecheopalri Lake and Singshore Bridge. We parked our car at the entrance of the Kachenjhunga waterfall and carefully walked up the rocks to catch the closer view of the waterfall. Some vendors were selling local chocolates and nuts inside the waterfall premises. I got some chocolates for my friends. From the Kanchenjunga falls, we headed to Rimbi Orange Garden. 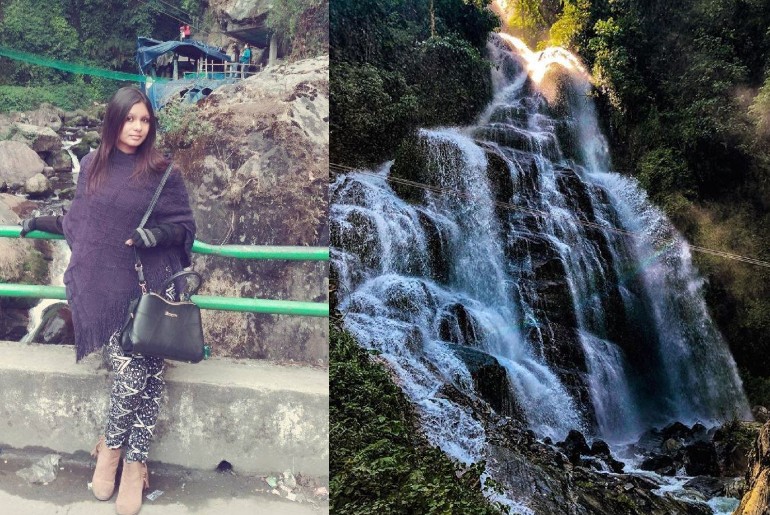 The Rimbi Orange Garden looked heartwarmingly pretty with orange plants all around. The round, ripe oranges looked fresh and juicy. We walked down the garden and found small shops where the shopkeepers were selling a unique variant of tea, the orange flavoured tea. The next destination after Rimbi Orange Garden was the holy Khecheopalri Lake. 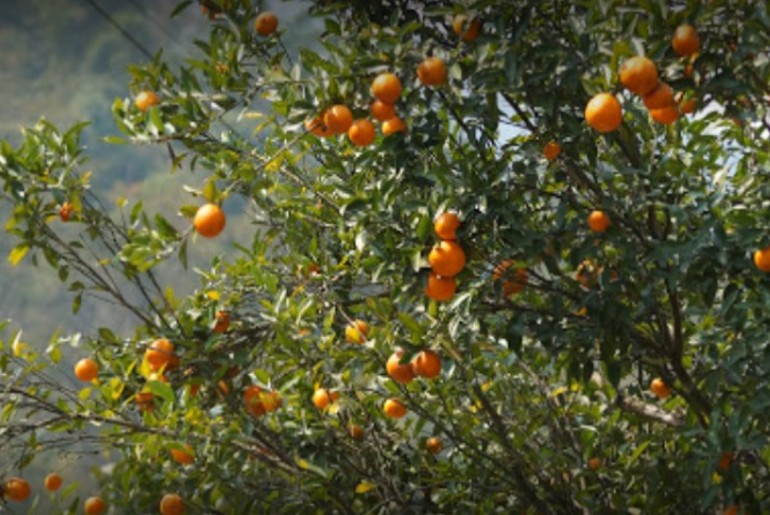 One of the most beautiful lakes of Sikkim has definitely got to be the Khecheopalri Lake. Towering at a height of 11798 metres, this is the highest lake in Sikkim. Tourists flock here to witness this holy, ‘wish-fulfilling’ water body. Legend states that the birds surrounding this lake protect it from any intruders. 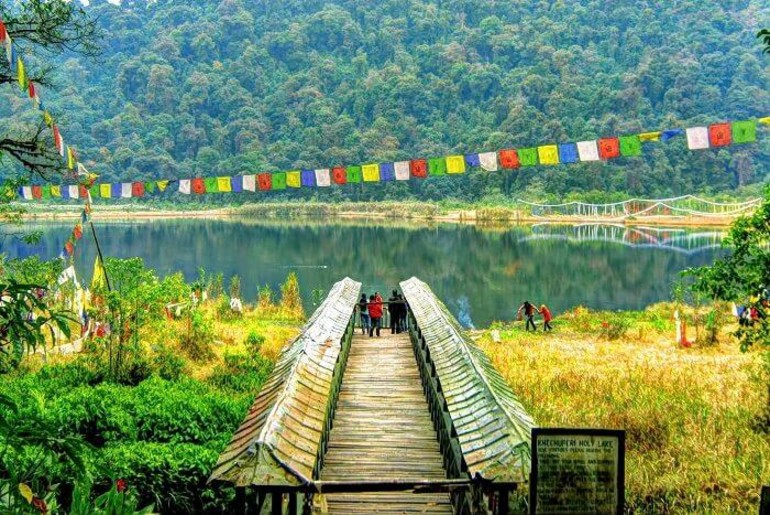 Interestingly, you’ll hardly notice any fallen leaf in the lake, even though its surrounded by green hills. According to local belief even if a leaf falls into the lake, a bird flies down and picks it up. We noticed many Buddhist monks praying in front of the lake. There are two parallel bridges on the lake with prayer wheels on both sides. 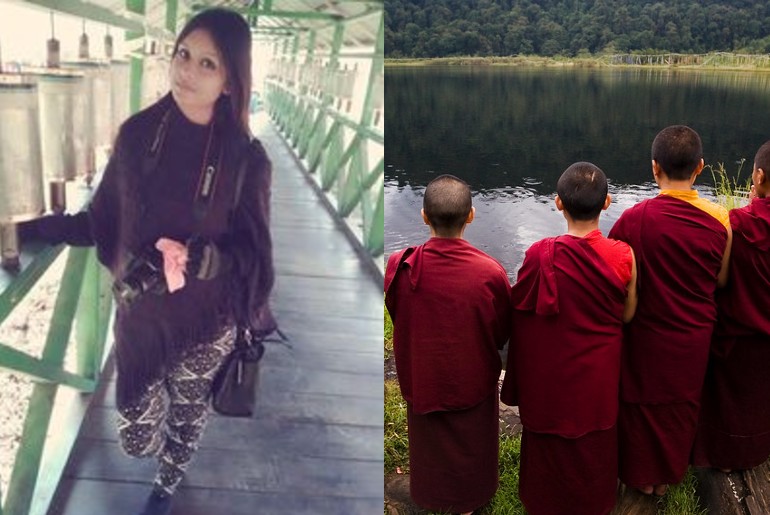 Below the bridge, numerous fishes were blissfully swimming. We gathered a bundle of memories from the marvellous lake. Two hours drive away from  Khecheopalri Lake, lies the Singshore Bridge, an engineering marvel locked by mountains. When we reached the bridge, the sky had already darkened. The mercury had dropped further and I could feel numbness on my nose. Nevertheless, soaked in the twilight, the bridge looked jaw-droppingly captivating. From Singshore Bridge, we finally started for Rinchengpong, our last destination. After the long journey from Singshore Bridge to Rinchenpong, we were highly exhausted. So, we packed our luggage ( we had to leave Sikkim the very next day), had our dinner and went to sleep. 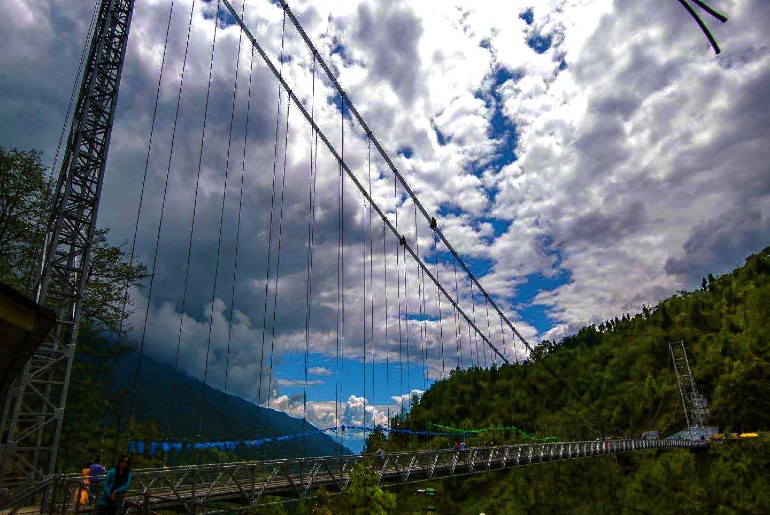 Also Read: Top 10 Regional Dishes From Darjeeling That Will Satisfy Your Soul

We had our luggage ready. Post breakfast, we had around 5 hours in hand before checking out. So we utilised the time to visit the Rinchenpong Monastery. The Himalayas looked spectacular from Rinchenpong, so we were having a joyride through the mountains. 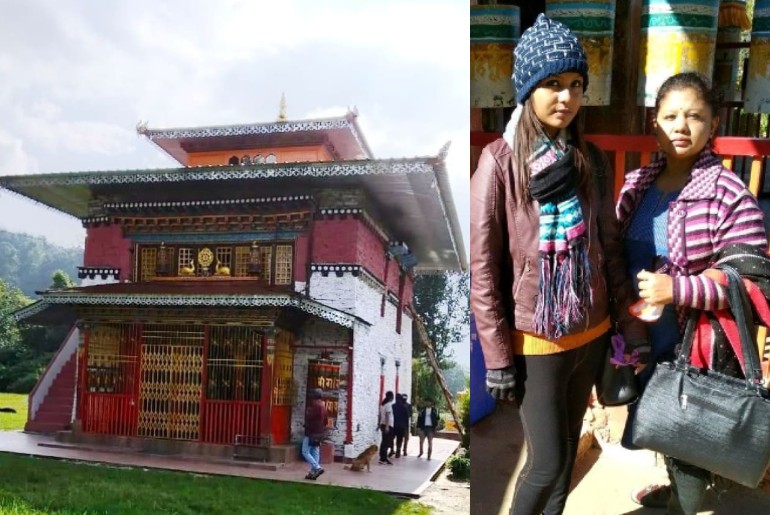 At around 12, we came back to the hotel, and after taking our lunch, finally said goodbye to the hilly state to get back to the normal routines. We had our train at night from New Jalpaiguri station. We reached Howrah the next morning. 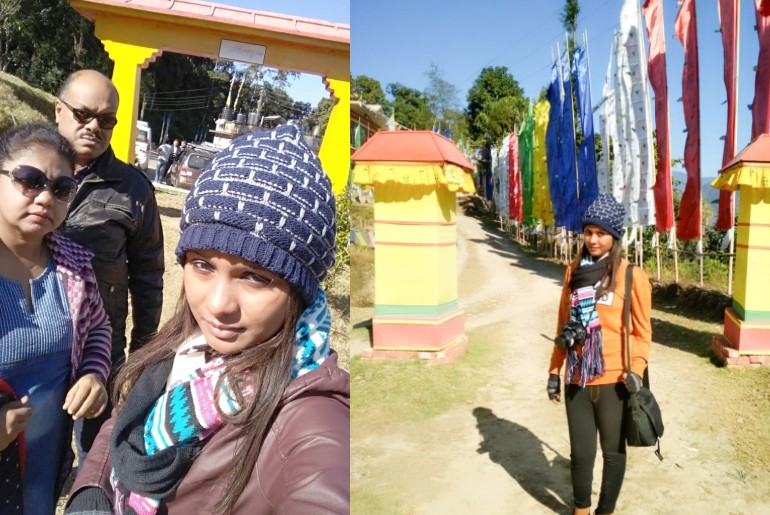 Including flight and train tickets, shopping, eating, car costs and everything else, the total expense for the three of us for 5 days was around ₹55,000 ( nearly ₹18,300 per head). The cost might seem a bit high, but we stayed at fairly good hotels with all the modern amenities, that too in good locations. We had to shell out most for the cars. The cars were charging around ₹2000-₹3000 per day. But this cost will be divided if you visit these places in groups. No small cars ply in the region and a single car over there can accommodate 7-8 people. Also, there are oodles of budget hotels in the region for backpackers. So, if many people explore these places together, the cost per person will come down to around ₹7000-₹8000, which is reasonable. Meanwhile, this is the highest permanent village in India: