Orchha is a splendid historic town in Madhya Pradesh, on the banks of the mighty Betwa river. Reckoned as one of the famous tourist destinations in India, Orchha is home to many primaeval temples and palaces that can take us back to time. Among them is a beauteous temple, which is the only holy shrine in the country where Lord Ram is treated like a king. Scroll down to know more.

Ram Raja Temple in Orchha treats Ram more as a monarch than an almighty, that too inside a royal palace. A guard of honour is conducted every day at this place, by the policemen who have been appointed as the temple guards. All meals and other amenities are provided to the deity of Lord Ram in a kingly fashion. Just like the king’s nobles in the kingdom, the people within this temple honour Lord Ram with armed salutation every day.

Lord Ram’s deity in this temple has a sword on the right hand and a shield on the left one. He is sitting in Padmashan, crossing the left leg over the right thigh. Along with Raja Ram, the temple also has idols of Sita, Laxman, Maharaj Sugreev and Narsingh Bhagwan. Hanuman ji and Jamwant ji are seen praying below Sita’s deity. In the darbaar, there is a murti of Durga Ma as well. It is believed that Lord Ram came to the Queen of Orchha, Ganesh Kunwari in the form of a baby. The Ram Raja Temple is actually the queen’s palace where Lord Ram got transfixed in the form of an idol. The temple receives about 1000 to 1500 visitors daily and on special occasions like Shivratri, Ram Navami and Makar Sankranti, the crowd gets thicker. On such occasions, the shrine also offers special accommodation packages in its dharamshala private rooms and dormitories. The premise of Ram Raja Temple is profoundly clean and well managed. One will definitely fall in love with the delicious kalakand sweet that is served here as prasad. It also offers online booking facilities for Ram Raja darshan and Sunday yogna through its website. 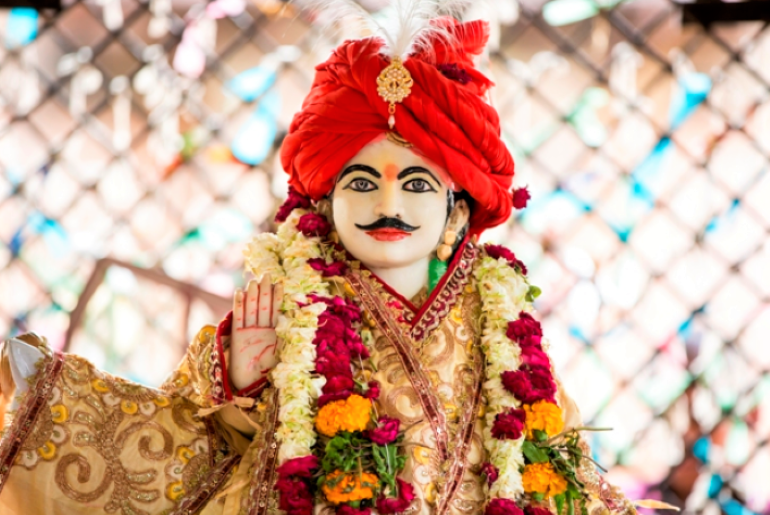 So, if you have plans in mind to make a tour to Madhya Pradesh with your family or friends, don’t forget to pay a visit to this grandiose tirtha in Orchha.