Bangalore is all set to get a 14-feet tall statue of Prime Minister Narendra Modi made entirely out of automobile scrap waste. A father-son duo from the Guntur district in Andhra Pradesh have been commissioned to create the art by BJP corporator Mohan Raju. The team earlier built a majestic statue of Mahatma Gandhiusing 75,000 nuts and bolts. This is the second such statue to be made by cculptor K Venkateswara Rao and his son K Ravi Chandra. Read on to know more.

Sculptor K Venkateswara Rao and his son K Ravi Chandra who reside in the Tenali area of Guntur in Andhra Pradesh started have created a 14-feet statue of PM Modi. The duo started work on the statue two months back after they were commissioned for the project by BJP corporator Mohan Raju. The statue will be installed in a park in Bangalore, Karnataka. The BJP statue is made using over a ton of waste discarded by automobile companies and collected from scrap markets in Guntur, Chennai, Vishakapatnam and Hyderabad. A team of 10 members assisted in the welding and other work.

Also Read: Afghanistan Has 3-D Light Projections Of Buddha Statues That Were Destroyed By Taliban 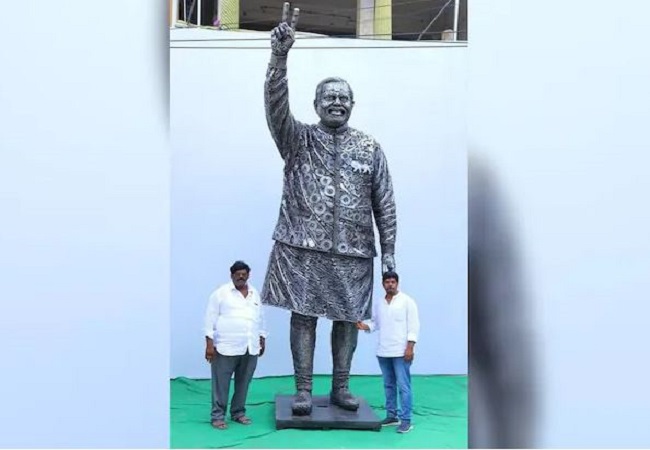 The 14-feet PM Modi statue took over 600 hours to create. Sculptor Venkateswara Rao revealed to India Today that two tonnes of discharged automobile scraps like gear wheels, iron rods, nuts, bolts, bike chains and other broken unusable metal pieces were used to create the piece. He further added that usually statues with perfect facial features are not made of scrap. They are usually created using bronze. So the sculptors, found it challenging to create facial features using scrap material. The artists used GI wire for sculpting the distinct hairstyle, beard, spectacles and facial expressions. 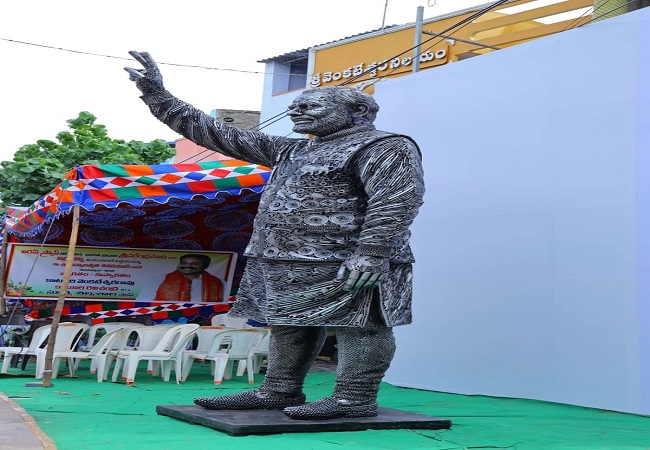 Also Read: 10 Best Rooftop Restaurants In Bangalore To Dine Under The Stars

The 14-feet statue of PM Modi will be installed in a park in Bangalore by BJP corporator Mohan Raju. And when it comes to parks, here are 5 offbeat places you must visit in Bangalore during the weekday.