Retired Postmaster Made A Taj Mahal For His Late Wife 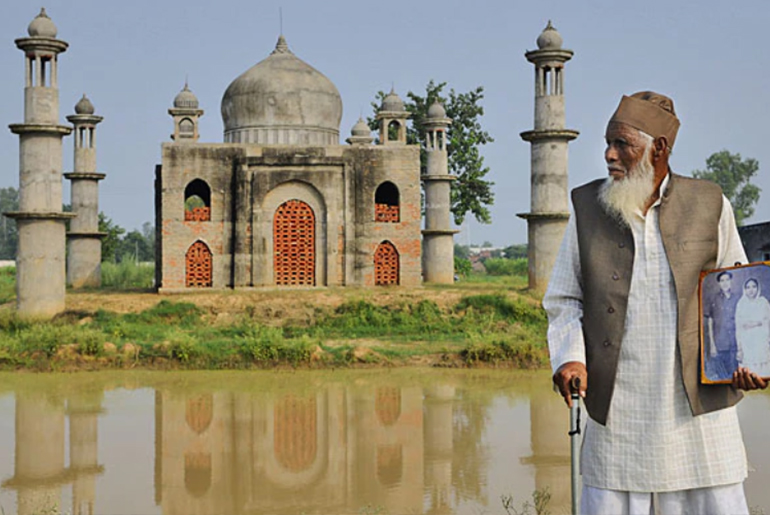 Emperor Shah Jahan might have built the Taj Mahal over the tomb of his late wife, Mumtaz, but an 80-year-old man from UP built a mini Taj Mahal.

Faizul Hasan Qadri is a retired postmaster from western Uttar Pradesh married Tajamulli in 1953. In 2011, 58 years later, his wife passed away due to throat cancer, he put together all his finances into building the mini Taj Mahal in the memory of his beloved wife. For 3 years, he went on building the structure, but sadly it has no come to a halt due to financial problems. Currently Qadri has spent nearly ₹11 lakh on building the mini monument and he needs to put in ₹6-7 lakh more to put the marble and prepare a green park around it. The structure is nearly 27 feet in height and he constructed it on his agricultural land where he buried his wife. The dome and four ‘minars’ have been prepared, but he needs to install the marble, plant a few trees and he wants a small water body around the area.

Many people have offered him money to help complete the monument, but he has refused it. Qadri believes that he wants to only put in his finances in the project because the monument will be a representation of his love for his late wife. He doesn’t need anyone’s help in completing this.

Uttar Pradesh’s chief minister, Akhilesh Yadav, wants to meet him with and the Qadri has only one request for him. He wants his village school to get recognized by the education board.

Also read: Trekker’s Delight, Roopkund Lake In Uttarakhand Is Not The One You Can Miss