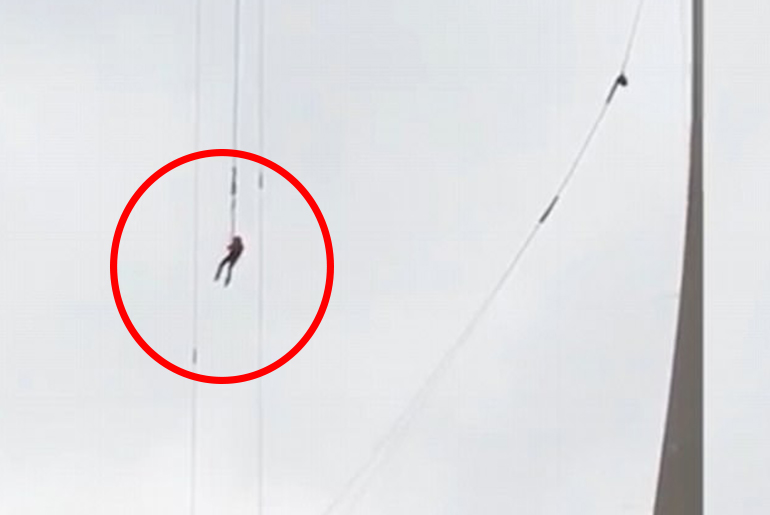 A Russian-Chinese man was stuck dangling at 180ft in the air for an hour in Macao from a bungee swing as the temperature went down to 9 degrees.

A tourist was left dangling in mid-air in Macau after a technical error at the world’s highest bungee jumping facility. This incident was reported in the afternoon when the Russian-Chinese tourist (30-year-old man) was dangling at 180 ft in mid-air for one hour before the authorities were called and the rope was cut to bring the tourist was brought down. He was saved by the firefighters, but he suffered from effects of hypothermia as the temperature was down to 9 degrees at that time.

Also read: Discover The Oldest & Most Liberal Temple In The Macau Peninsula The incident occurred nearly 2.40 PM in the afternoon and the man was rescued at 3.45 PM. Firefighters came to the rescue with a 70 meter ladder and cut the rope to free the man. According to reports, the error occurred due to the jamming in the pulling system of the bungee swing. After being rescued, the man suffered from signs of hypothermia – he was shivering and his skin appeared pale. The man was immediately taken to a hospital nearby and he was treated.

Macau’s bungee jumping is performed from the 61st floor of the Macau Tower. It holds the Guinness World Record for the highest bungee jumping swing of the world. It is 234 feet (764 feet) high.

Also read: We Jumped From The World’s Highest Bungee Point In Macao & It Was AWESOME