Saudi is an underdog with paradise-like destinations. The attractions in Saudi can be simply breathtaking. But very few explorers know about such spots in Saudi Arabia. One such place is Al Qarah Mountain in the Saudi Kingdom. Scaling this mountain can provide you with some unparalleled 360-degree views of Al Ahsa. So if you wish you witness the world’s largest oasis, then keep reading.

Arabic interpretations of the place names in the area lend fresh meaning to Al Qarah Mountain’s majestic top. The names of the governorate and the capital city, Hofuf and Al Ahsa, respectively, translate as “murmuring streams” and “whistling wind,” respectively. Visitors who climb this limestone cliff will be able to experience both of these and see the influence of the former’s beautiful greenness.

You will be able to see this powerful peak on the way to Al Ahsa National Park. The top is about 200 metres above sea level. Only trained guides should assist to ascend the mountain.
You can enquire with the on-site employees about guidance. They will be more than delighted to advise the ideal way for reaching the summit.

Nearby Attractions To Enjoy

Every second spent working out will be worthwhile once you reach the summit! The Al-Ahsa Oasis, which is home to nearly three million palm trees, is visible from the top. You won’t be able to erase the contrast between the infinite dunes and the greenery of the trees! These beloved palm palms also serve as a sandstorm shield for homes, farms, and other buildings, acting as a guardian.

The museum gives a great description of the region’s prehistoric past. Observe the alleged significance of the mountain in the reigns of Prophet Ibrahim and Dilmun monarchs mentioned in local traditions. Nearby, there is a cast of sculpted monuments illustrating the life of Adam. You will also find so much information regarding Al Ahsa’s irrigation and farming innovations.

Which will you do first? Let us know below!#VisitSaudi pic.twitter.com/xtCbdlR0eC

The sandstone rocks formed a web of curves and caverns by rain and rivers rather than groundwater. The mountain’s striking mushroom-like forms, tight canyons, and high internal tunnels are the result of this. 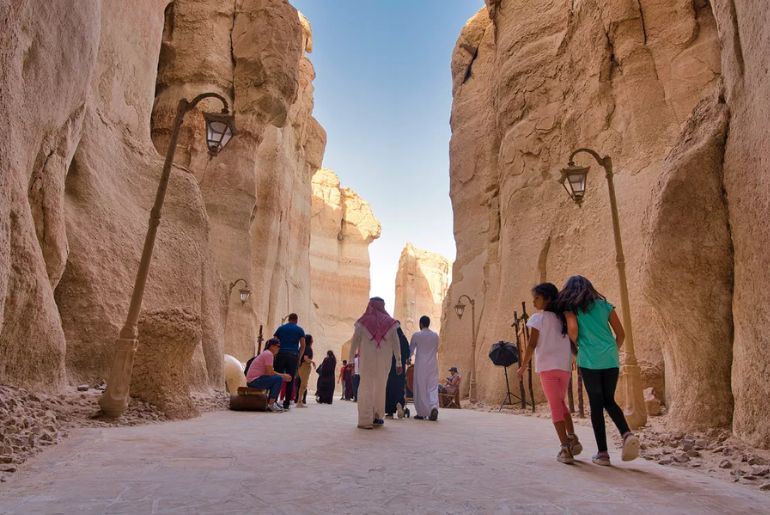 The caves are a well-liked tourist destination all year round. In addition, it is also a prime location for birdwatching during the migratory season.

Also Read: Free Things To Do! Here&#8217;s How You Can Celebrate Saudi National Day

How To Reach There?

Twelve kilometres to the east of Al Hofuf, next to Al Ahsa National Park, are the settlement of Al Qarah and its mountains. The Saudi Arabian capital, Riyadh, is 330 kilometres away from the mountains. Al Hofuf is easily accessible by flight. Take a private taxi to the mountain if you reside in the centre of the city.

Hours of visiting the Al Qarah Mountain: daily 8 am to 11 pm

So grab your sunglasses, wear some breathable clothes and set out for the most beautiful adventure to explore Saudi Arabia from the top.