Go Solo! The Best Gift Abhinav Gave To Himself on Valentines Day 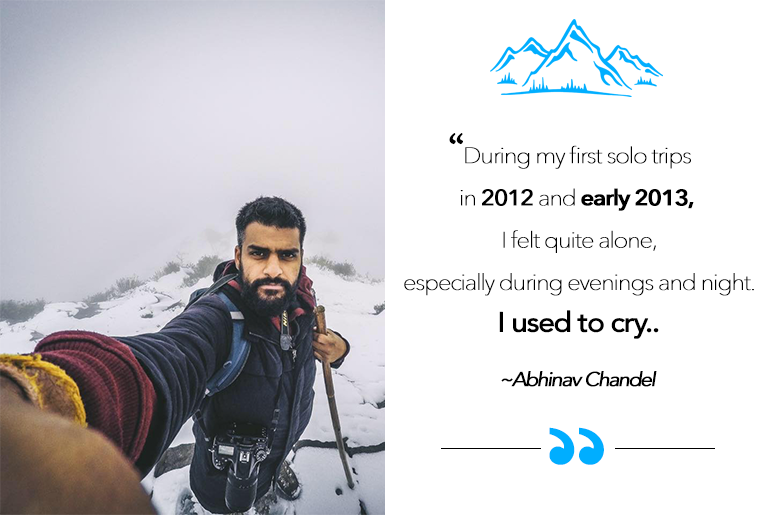 Valentines Day may be over but the Facebook feed is still buzzing with love emoticons and mushy updates. This can be quite annoying for those alone & single but if you ask Abhinav Chandel on how he deals with being single? ‘Just travel,’ he quips.

Meet Abhinav Chandel, an itinerary planner by profession and a solo traveller by passion. “It is overwhelming and it is the single best gift you can give yourself. You don’t need anyone, just go solo.” Abhinav’s avid Twitter followers know him as that guy who tweets frame-worthy photographs from his trips. He left for the mountains in Mcleodganj in 2013 and has been staying there ever since. This April, he will be completing three years of living in the mountains.

While travelling came to him naturally, he only actually began his journey to quench his wanderlust 4.5 years ago. His first solo journey began in 2012 and he hasn’t looked back ever since.

He recommends solo travel as he believes it gives you a first-hand experience of life and makes you a better person.

At first, when I began, I didn’t have anyone to travel with. By the time I had spent 3-4 months solo-travelling, I realised the many benefits of it. The biggest of them all is that I didn’t have to plan my trip according to anyone else, there weren’t any obligations, and since I have been a freelancer, it also affords me to leave without a return ticket. It also gives me a whole lot of time to spend with myself. At the age of 15, I guess. One afternoon I returned home and told my mother that I want to go to Rishikesh. It is a 6-7 hours’ journey from my hometown. I stayed at my uncle’s place in Rishikesh, but I travelled alone and even in Rishikesh I ventured out in the town all by myself. And it felt good to travel the world at my own pace and being on my own. I felt free.

During my first solo trips in 2012 and early 2013, I felt a certain kind of loneliness, and there were times when I broke down. Being alone also ensured that a lot of negative thoughts affected me. Since I was scared of approaching strangers and starting conversations, I had nothing to distract myself with. I felt quite alone, especially during evenings and night. I used to cry. But this is also something that helped me find a friend in myself eventually. If I hadn’t started travelling solo, I wouldn’t have been able to learn more about myself and love myself, and gain confidence.

So I've heard from people who've been successful in life, about how important it is to listen to your heart, and that's something I try to incorporate into my life. . So this morning I woke up, knowing that I've to leave for Delhi this evening as I travel back to home to Uttarakhand, but I felt this urge to go climb the snowy mountains that I was able to see from my window. And without even preparing for journey back home tonight or packing my bags in advance, I left because that's how I felt. Knowing very well that there'll be police people stopping everyone from trekking since it had snowed quite a lot last night. . However, I took the chance and left early in the morning, reaching the checkpoint in time only to find that no one was allowed to trek further towards triund. But I didn't leave, and then policeman and another senior guide had recognised me and knowing that I'm a local and have trekked in snow on the same path many a times before, they asked me to take a different route and make my way along with a shepherd who was walking back to his home, a tiny settlement on the way. . It was him, me and a few goats, as we walked through the snow, surrounded by a cloud, until he left me midway and took another trail that led him to his destination, while I proceeded without any. . It was kinda surreal to be able to walk on this trail without anyone around, as if world was yet to discover Triund, which ensured that I could spot a few foxes and something that looked like a panther on my way. . And my way, filled with snow, led me beyond the midpoint of the trek until a place where I had realised that it was a bit too risky to venture further alone. . I had trekked more than I was expecting, when I left my home, and the experience itself has completely cleared my head and uplifted my confidence before I leave tonight for a trip that might lead to some new beginnings. . And as I sit at a cafe, waiting for my lunch now, I have a smile on my face for today was one of those days when I ended up following my heart. . And all through my life I've realised, magic happens and opportunities arrive only when you listen to your instincts. . It's then you succeed.

I rarely miss having a company, now that I’m comfortable on my own, and plus since I’m no longer the introvert, I am always just one conversation away from making a new friend.

Yes, sometimes. But my mother and I have made a pact that no matter wherever I am travelling, I always call her up every day (depending on availability of phone connection), and then I keep going back home at regular intervals, and especially during all the festivals. A LOT OF FRIENDS. The thing is most of these friendships last only through the journey, and while I’m in touch with quite a few of them, there are also a lot of them that I haven’t been in touch with.

I think the best point of my solo travelling was when I came to McLeod Ganj back in 2013. I ended up trekking in the snow. It was my first trek, and I did it all by myself. And since then began my relationship with the mountains. This April, I’ll be completing three years of living in the mountains (McLeod Ganj) The world isn’t as bad a place as we are taught and there are many wonderful souls out there. I’ve learned how to utilise my money as I travel. I end up cutting on useless expenditures and realise how less I actually need in life. How wonderful it is to spend money on things which truly make you happy, like the wonderful experiences you come across while travelling. Also, solo-travelling gives me a chance to immerse into the local life, listening to their issues and difficulties. You learn more about human lives and its struggles and it fills you up with gratitude. I am more aware of environmental issues now than I was before I started travelling.