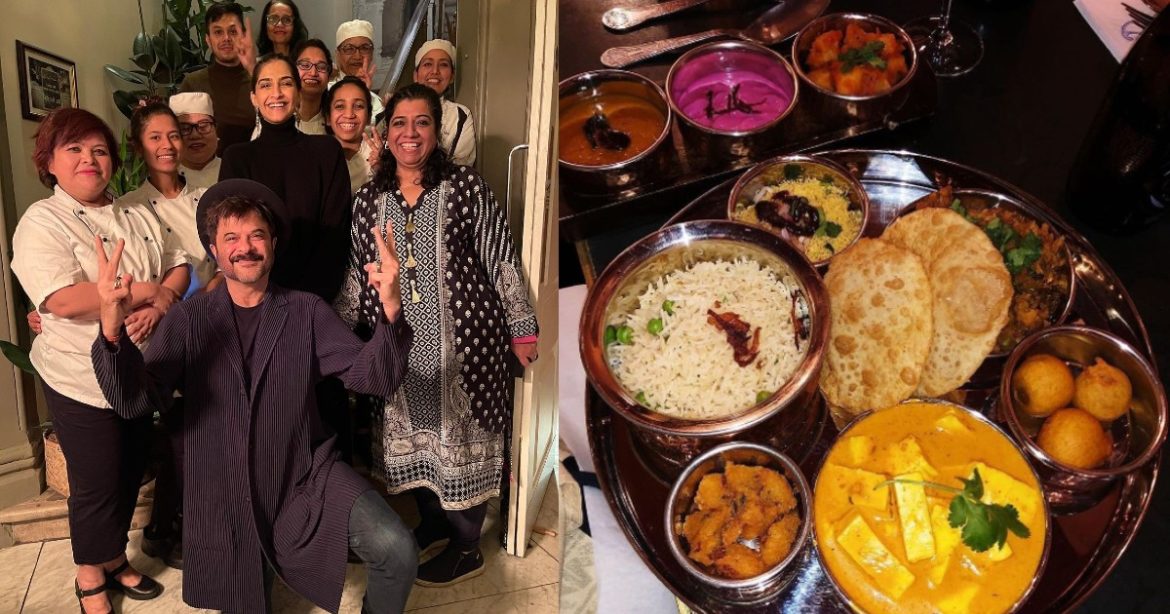 Actress Sonam Kapoor was in London recently with her father Anil Kapoor and she checked into the Darjeeling Express restaurant in the city to relish some Indian food. At the restaurant, the father-daughter duo gorged on some authentic Kolkata and Rajasthani dishes. Taking to her Instagram handle, Sonam wrote, “What an incredible meal @darjeelingldn with @asmakhanlondon it was such a sumptuous experience. It was such a beautiful mix of Calcutta and Rajasthan, street food and traditional homemade food. Thank you @imranamed for organising this for my parents. Love you.”

Also Read: From Biryani To Dhoklas, Sanjana Sangi’s Love For Food Is A Melting Pot Of Various Cultures

Sonam And Anil Met The Chefs At London’s Darjeeling Express

Darjeeling Express is an Indian restaurant in London founded by Asma Khan, who leads a kitchen operated solely by women. Writing about Anil and Sonam’s visit to her restaurant, Asma wrote on Instagram, “They were so warm and charming-the father & daughter duo and family came to our restaurant last night- @anilskapoor and @sonamkapoor took time to talk to all the chefs- AK surprised the kitchen team by visiting the kitchen (the shrieking & clapping was deafening when he walked into the kitchen!) Sonam took time to talk to all the girls and told them how she enjoyed each dish she had eaten. What an incredible experience for the team. When the girls came up to the dining room to thank them- they broke into song!  ”

Also Read: Rohit Shetty: I Used To Earn ₹35 In The 90s & Had To Travel Long Distances On Foot

The Restaurant Team Burst Into Songs From Anil’s Movies

Imran Amed, the founder and CEO of The Business of Fashion, who organised the sumptuous meal, wrote, “Last night, after long last, managed to get a table at @darjeelingldn, a restaurant led by the force of nature @asmakhanlondon who employs a kitchen filled with women like her: with grit, passion and love for what they do, She welcomed us into her space, fed us the most delicious Bengali and Rajasthani dishes, and brought her team up afterwards to meet @anilskapoor and @sonamkapoor. They were in awe and burst into spontaneous songs from his movies. One of those magical moments that can only happen when people come together to break bread. Thank you Asma. Our bellies were bursting and the leftovers are already calling me.”

Also Read: This Was The World’s Longest Bus Route From Kolkata To London

Meanwhile, if you’re in London and in the mood to try Indian food, you can head straight to Darjeeling Express.