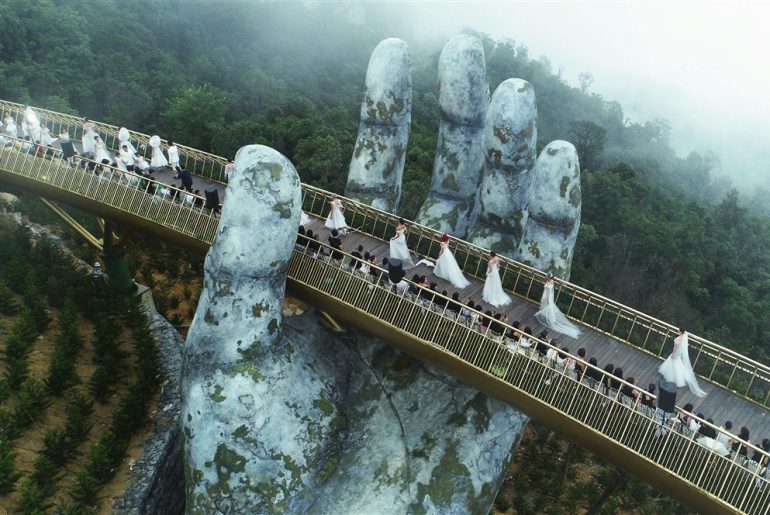 Cau Vang – Ba Na Hills (Golden Bridge) in Vietnam is nothing short of a fictional scene that has taken the internet by storm, here’s why.

It’s a footbridge that pedestrians can use along with witnessing mesmerizing views and the stunning piece of architecture that holds it together, two giant stone hands. Never have you ever seen an unconventional work of art like this one, the bridge looks straight out of a scene from the most beloved TV show – Game Of Thrones. The bridge has been constructed in the Ba Na Hills, near Da Nang in central Vietnam and has taken up the internet by a storm with its striking features, making it the most unique pedestrian bridges in the world.

Also read: 10 Reasons Why Vietnam Is A Backpacker’s Paradise The bridge that opened in June is 150 metres long and 1,400 metres above sea level that has views of the mountains across it and the lush greenery surrounding it. The bridge took around a year to be constructed, the initial designs had been laid out by TA Landscape Architecture. The bridge is supported by a pair of enormous stone hands, and it has an array of flowers lined up on the path. It is been constructed to entice the tourists to the area and promote tourism. The Ba Na hills mountain retreat was a favourite destination amongst the ruling French authorities in the early 20th century which fell into ruin after the revolution against colonial in 1945.

Also read: 10 Reasons Why Vietnam Is A Backpacker’s Paradise Travellers and tourists can be seen flocking around the bridge and taking photos of themselves with the beautiful sceneries in the background. The bridge has sure been an addition that will serve as a picturesque landmark for decades, lots of couples can also be seen using the bridge as a location for their wedding shoots.