This Man Drove From Delhi To Spiti Covering 1,900 km At Just ₹2000 On His Electric Vehicle 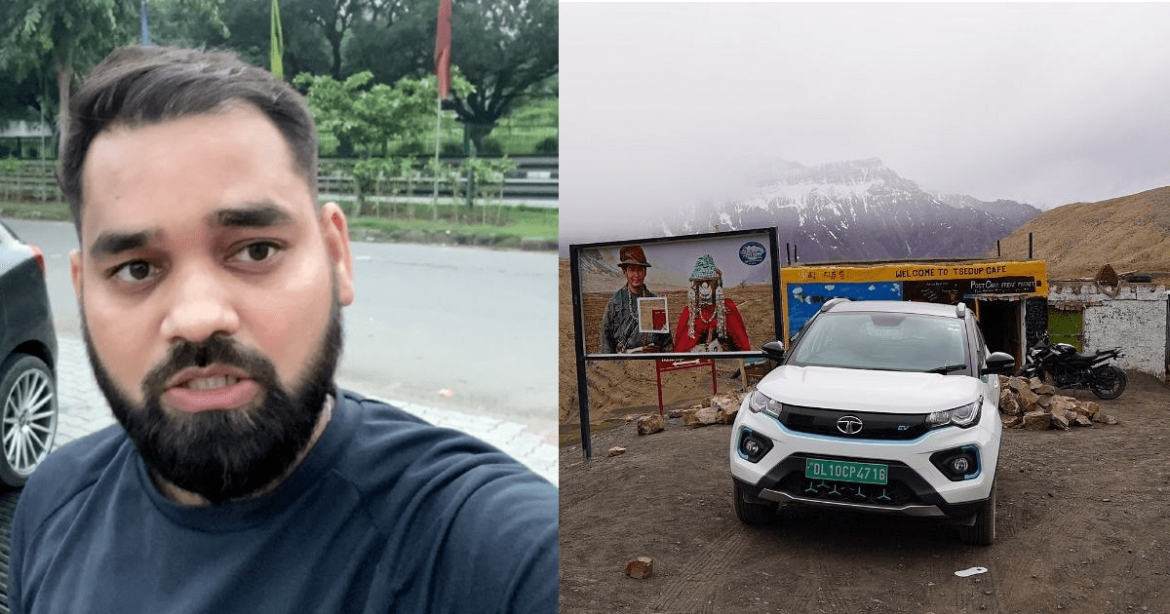 While you might have planned or gone on plenty of road trips earlier. But have you ever gone on a road trip in an electric vehicle? Does saving the environment and having a good time, go hand in hand. Well, Anjnay Saini from Delhi will say a big Yes! The Delhiite drove all the way to the world’s highest post office and petrol pump in Hikkim and Kaza in his electric Tata Nexon. Driving in Spiti,  a high altitude desert with rough terrain, is a risky move, and in an electric vehicle? That’s another ball game altogether. But Anjnay Saini covered 1,900 km at just ₹2000 on his electric vehicle. Here’s his story.

Anjnay Saini revealed to The Better India that it was one of the most challenging and exciting trips so far. He went on a 5-day well-planned trip from Delhi to Spiti in his electric car on June 13. Anjnay and his friends drove via Sonipat, Karnal, Chandigarh and Shimla. They had a single goal in mind to reach the world’s highest post office and petrol pump. While it was certainly risky to drive in difficult terrains in an electric car, with no proper roads and charging stations, Anjnay said with proper planning you can achieve it all.

Tata Nexon has a range of 312 km on a single charge. And its battery takes 8.5 long hours to charge fully. As an EV driver, Anjnay says one must be ready to drive slowly and have an ample amount of patience and discipline. Anjnay said to The Better India that if you drive at 80 kmph you can have a terrific range of 200 km in Nexon. So, by controlling the speed, the travel enthusiast was able to hit a range of 320 km. But with average range on hilly areas being 180 km, he was okay with vehicles overtaking him. To prevent battery drainage in an EV, Anjnay accelerated less and out fewer brakes. His main focus was on battery optimisation.

The Key To Great EV Road Trip Is Pre Planning

As an electric vehicle driver, it was very important for him to plan thoroughly for the trip. So firstly he identified routes that were downhill for the regenerative braking. This helped him save energy. Next, he rang up hotels and enquired about charging facilities. He also carried a 15-ampere charger and an earthing kit for continuous current flow while charging.  Anjnay identified charging stations- Statiq, TataEZ and Forteum, on his route. Since dhabas and restaurants have AC(Alternate Current), he planned his rest stops accordingly. So, while he ate, slept and rested, his car was charging. 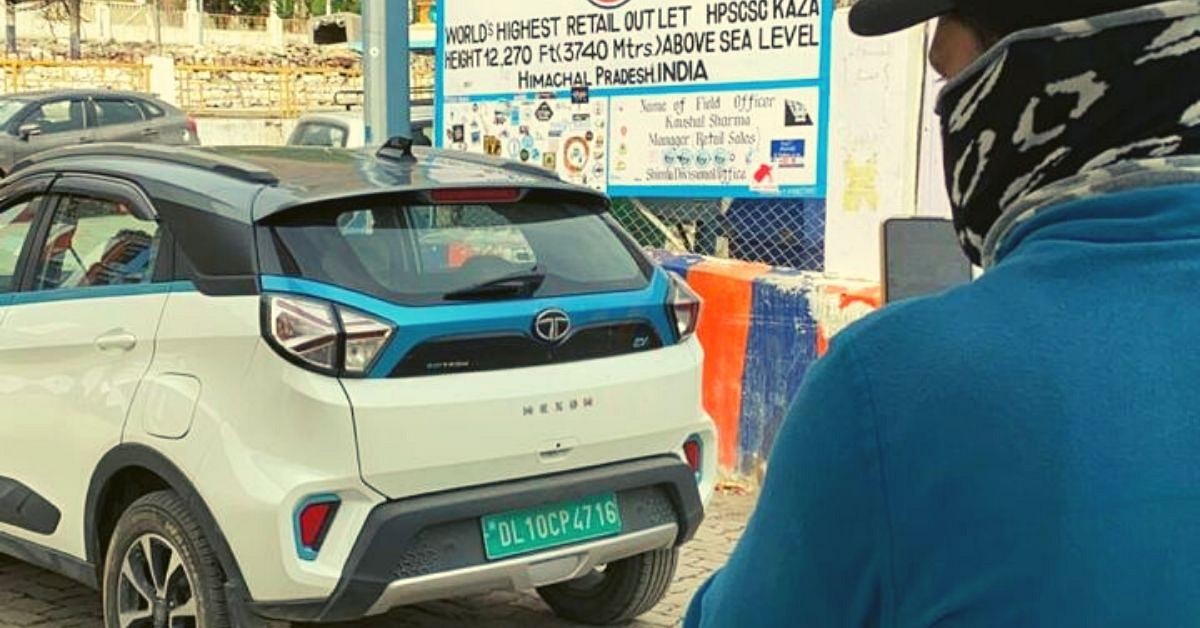 A Road Trip & A Fun Experiment

A part of the trip, Anjnay and his friends took 2 cars, an EV and a petrol-based one. They drive from Delhi at 5 pm with a fully charged EV and the 12-hour drive till Shimla was super smooth. Saini always followed the thumb rule that 1 km takes 1% of battery charge on an upward slope. And for downhill, with the same percentage, it can cover 4 km. While initially, the ride was smooth, the challenge started when they entered the valley with steep roads. But keeping his thumb rule in mind, they could continue with small bumps along the way.

Once they reached Shimla, the friends were left with just a 20 per cent charge. But according to the plan, they halted for 6 hours and charged the car for up to 60 per cent. This helped the cover another 126 km and reach Rampur. Since 40 per cent of this route was downhill, they consumed less battery. They stopped along the way at dhabas for lunch and dinner to charge the EV. The frequent stops at dhabas and restaurants to charge their cars, coupled with an overnight stay at a hotel helped recharge both the electric vehicle and the weary travellers.

Also Read: 5 Best Dhabas To Take A Halt On Your Next Road Trip From Delhi To Amritsar

Reaching Rugged Terrains On Spiti Valley In An Electric Vehicle

The next morning the group drove to Kaza, the capital of Spiti Valley. They had around 42 per cent charge left and covered around 120 km. Finally, the electric vehicle reached the world’s highest petrol pump and post office. The friends experienced a smooth rod trip driving an electric vehicle at minus 2° Celsius temperatures on snow-covered roads. Despite the oxygen is low and the terrain rugged, Anjnay didn’t have range anxiety. It was a wonderful experience for the travel enthusiasts, who reached home with 20% charge left, thanks to Anjnay driving the last leg of his journey in S ( sports mode). 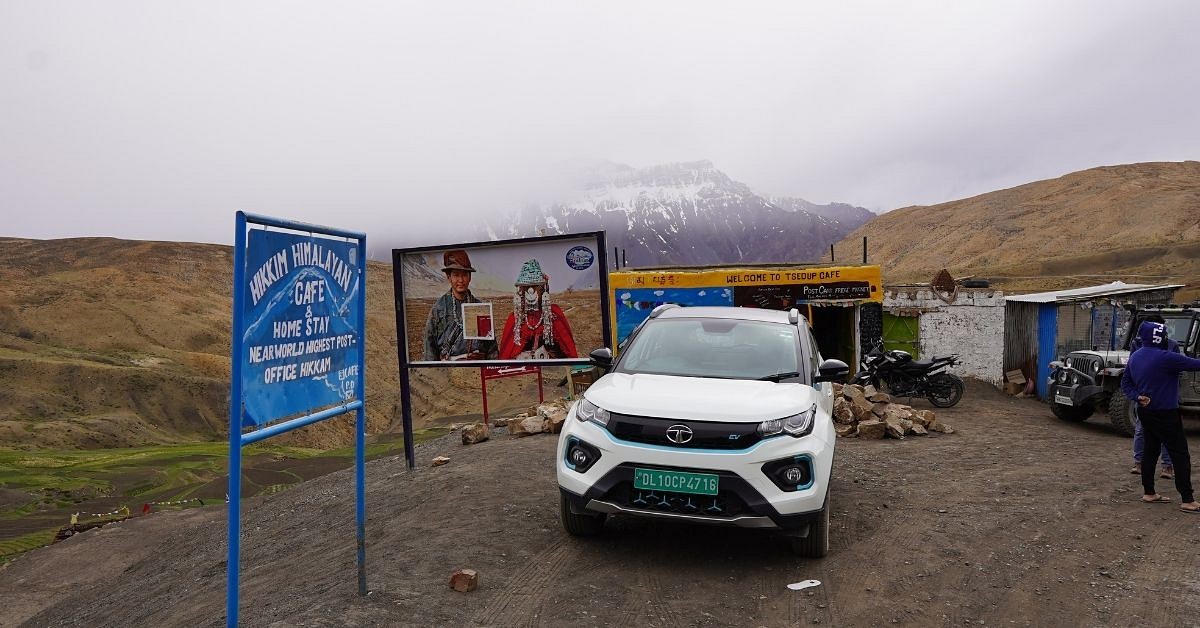 People Were Helpful & Enamoured By The EV During The Road Trip

When it came to recollecting some of the highlights of his trip, Anjnay had plenty. He revealed to The Better India that people including the police were welcoming to them wherever they went. From locals, tourists, policemen to restaurant owners, everyone was curious how they could drive to Spiti in n electric vehicle. The dhaba owners were happy to offer their charging stations and hotels cooperated completely. In his observation, people were enamoured and interested in EVs. 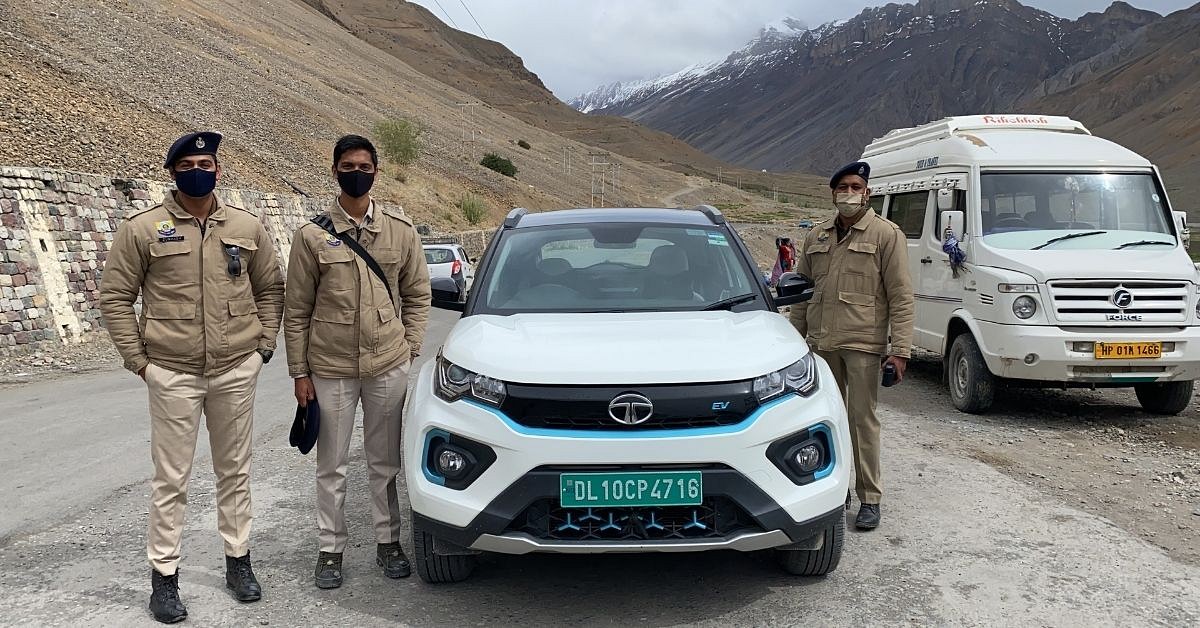 As an interesting observation, while Anjnay’s friends spent around  ₹18,000 for a petrol-based car to cover a distance of 1900 km. His electric vehicle, Nexon covered the same distance in just ₹2000. Anjnay paid for charging at every restaurant, dhaba and hotel based on the cost of electricity per unit and hours it took to charge. It was both a cost-effective and environmentally friendly experience, where they paid just ₹1 per km. Anjnay Saini drove the first EV to reach Spiti Valley. So, friends, if you have an electric vehicle and you’re wondering if it’s good for a road trip, then Anjnay Saini’s experience says “Yes It Is!”