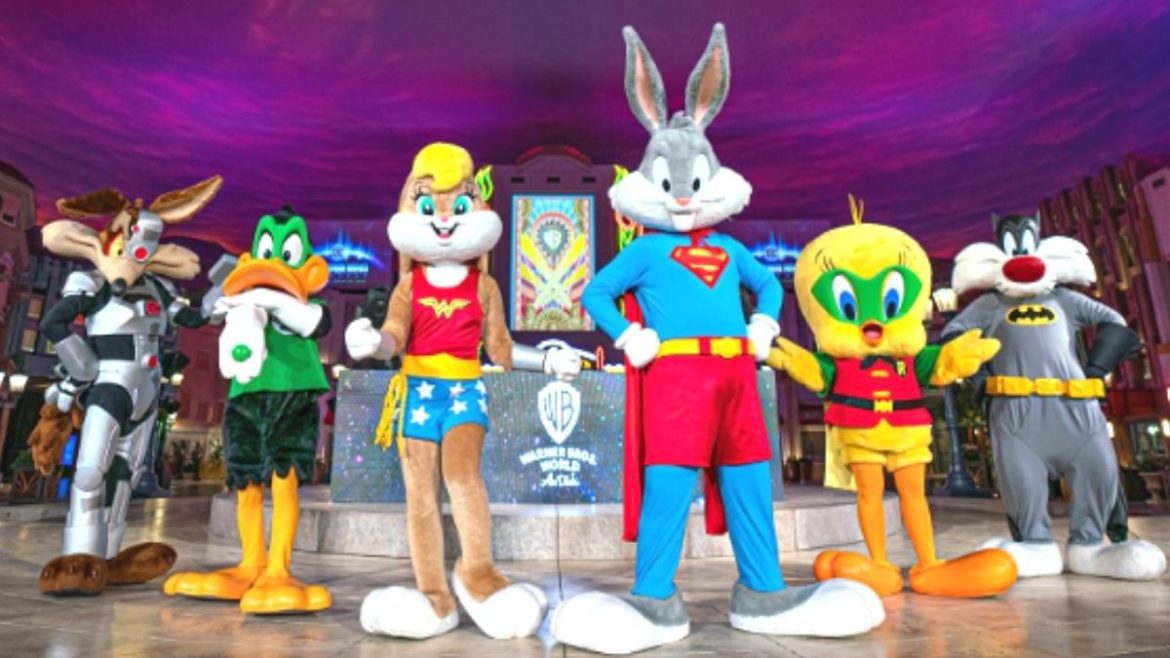 Would you rather enjoy an exciting journey through Gotham City’s streets or assist Scooby and the gang crack another mystery? At Warner Bros World Abu Dhabi, get ready to indulge in some vintage nostalgia! This 1.6 million square feet plaza on Yas Island provides a fully immersive experience for the whole family and has a breathtaking array of attractions.

Here is the list of the top attractions at Warner Bros World Abu Dhabi that you should not miss.

The Warner Bros. World Abu Dhabi Plaza is an excellent, art-deco-style location honouring Warner and the Hollywood Golden Age. Visitors may stroll around the plaza’s streets, visit restaurants, take in the architecture, and even run into many of their favourite movie characters. The All-Star Spectacular, a magnificent media display with dramatic lighting, occurs here in the evening.

Also Read: John Legend Is Coming To Abu Dhabi & “All Of Me” Is Excited. Deets Inside!

Visitors can experience life in the Stone Age in this Warner Bros World Abu Dhabi area. The Flintstones characters including Fred and Wilma Flintstone, Barney, Pebbles, Betty Rubble, and Bam-Bam may be seen in Bedrock. The Bedrock Boutique, a family-friendly entertainment area, a ride on The Flintstones Bedrock River Adventure, and cafés and restaurants are among the area’s attractions. For example, visitors may sample the famous giant-sized Bronto Burger and Mammoth Munchies’ prehistoric appetisers, and celebrity shakes at Bronto Burgers and Ribs.

In Dynamite Gulch, you can find one of the most top attractions at Warner Bros World. The Jetsons Cosmic Orbiter’s high-energy spin, the Fast and Furious sprint across coyote territory, Marvin the Martian Crater Crashers, and Yosemite Sam Rootin’ Tootin’ Gas on Route 66 are a few of them. In addition, visitors may explore this region’s magical worlds of Yosemite Sam, the Jetsons, Marvin the Martian, and Road Runner.

Visitors can explore the world of cartoons we have all grown up with at Cartoon Junction. This theme park section is home to the gravity-defying attractions Tweety Wild Wockets, Cartoon Junction Carousel, and Daffy Jet-Propelled Pogo Stick. Moreover, Scooby-Doo: The Museum of Riddles, another intriguing location in Cartoon Junction, challenges guests to solve various mysteries. In this world, you can see characters like Elmer Fudd, Tom & Jerry, Tweety, Scooby-Doo, Shaggy, Bugs Bunny, Sylvester, Daffy Duck, and Taz.

The metropolitan skyline of Gotham City is recreated in the darkness of this realm. The Scarecrow Scare Raid, The Joker Funhouse, and The Riddler Revolution are tourist attractions At Warner Bros World. The Batman: Knight Flight high-speed rollercoaster and the Rogues Gallery Games near Paradise Pier in the heart of Gotham City are additional attractions. Additionally, you can meet Poison Ivy, Scarecrow, Batman, Two-Face, Catwoman, Harley Quinn, The Joker, The Riddler, Penguin, and Mr Freeze throughout Gotham City. Finally, you can refuel before exploring the remainder of the park at one of the many food establishments nearby.

The architecture of Metropolis stands in sharp contrast to that of Gotham City since the setting is more contemporary and global. You can find Teen Titans and Justice League heroes like Green Lantern, Wonder Woman, The Flash, and others here. Moreover, one of the most well-liked restaurants in the Metropolis is Big Belly Burger.