Who doesn’t dream of going to space and exploring the endlessness? Well, no matter how far you go ahead to reach your starry dream, you will be left behind by a chicken nugget. Yes, you read that right. Your favourite snack just got the taste of heavens before you did. Seems mind-boggling? That is what Iceland Foods, a UK-based supermarket giant did to celebrate their 50th anniversary! They sent their bestselling chicken nugget into outer space. After all their chicken nuggets are out of this world! Read on to know more about this chicken nugget’s outer space journey!

The UK Supermarket giant,  Iceland Foods launched its famous chicken nugget into outer space to mark their 50th anniversary. The chicken nugget reached more than 110,000 feet above our planet Earth. How did they launch it? They used a meteorological weather balloon filled with hydrogen to carry the cargo up to the stratosphere. Using a custom-designed launch vehicle including primary avionics, auxiliary satellite tracking and integrated camera support system taking video footage. A team of experts in the field of stratospheric adventure, Sent into Space created the vessel for the nugget to be launched in.

We don’t know who needs to hear this, but we sent the first ever chicken nugget into space today ?‍?

Why? We have no idea, but it was out of this world! ? pic.twitter.com/XGmkT9ShBO

This famous chicken nugget, may his tribe increase, was launched near the supermarket’s head office in Deeside, North Wales. Iceland Foods, the company in question, had a highly successful year. Kantar named it as the fastest-growing high street supermarket. It also witnessed an increase of 20.1 per cent year on year growth. A little history shows that chicken nuggets have been a staple in the frozen aisle throughout Iceland’s 50-year history, with more than crore chicken nuggets, chunks and strips sold last week alone. 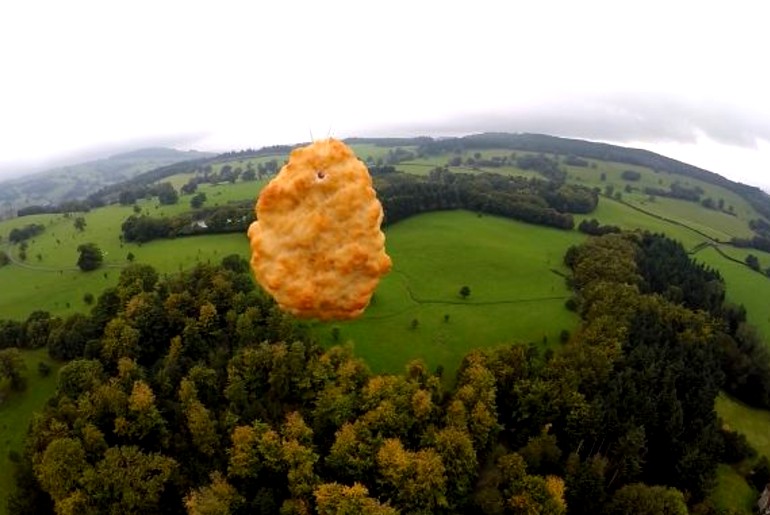 Speaking on this occasion to media houses, Andrew Staniland, trading director at Iceland said, “2020 is a huge year for us as we celebrate our 50th birthday, and we wanted to find ways to mark the occasion, just like anyone celebrating a birthday in lockdown…What better way to show that our products are out of this world than by sending one of our customer favourites into space…We’ve all changed the way we shop in recent months and frozen food has never been so popular…We’re looking forward to continuing to celebrate our 50th year with customers and thanking them for their support.” 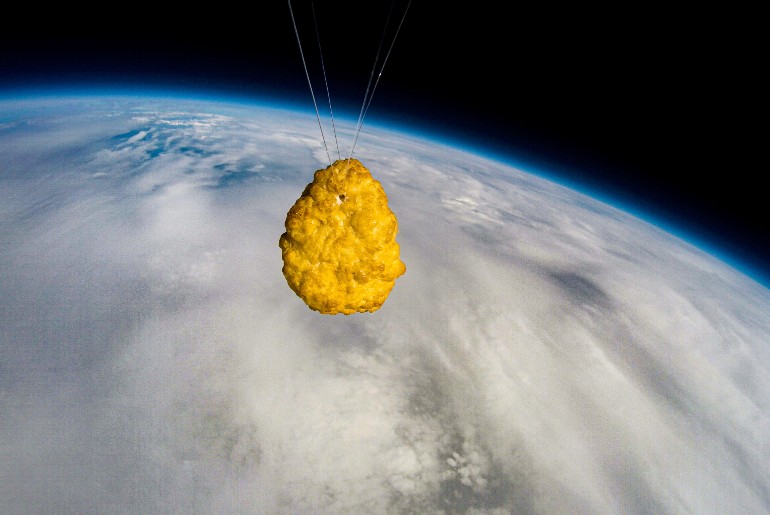 Also Read: 6 Butter Chicken Places In Delhi That Will Deliver At Your Doorstep

The chicken nugget took under two hours to reach 110,000 ft above the Earth. After reaching peak altitude, the nugget headed back to Earth at 322kph, with its parachute deploying at around 62,000ft to enable a safe landing. While you can’t sink your teeth into the outer space chicken nugget, you can eat the 24-karat chicken nugget in Dubai.