Ten Gorgeous Places In Japan You Have To Visit Once 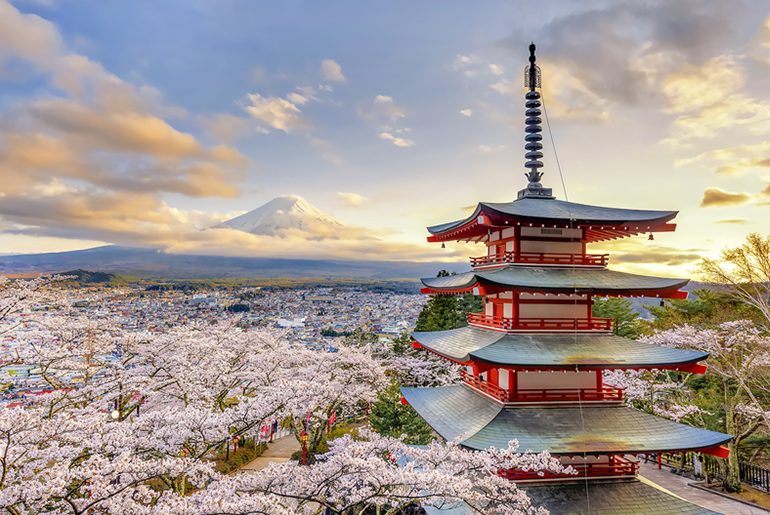 Japan is known for a lot of weird things but not enough is said about the beauty that Japan has to offer and we don’t mean only the Cherry Blossom Festival! We’ve compiled a list of the most gorgeous places in Japan that you have to visit at least once in your life.

This is one tunnel you’ll never ever want to get out of. The Wisteria Tunnel is a beautiful tunnel made of cascading flowers. We challenge you to walk through this exquisite place without imagining an elegant princess on a white horse.

Best Time to Visit: Late April or Early May, during the Fuji Matsuri when the magical tunnel is in full bloom The music of the dancing stalks in this beautiful forest has been voted to be documented as a governmentally recognised sound. Located at the edge of Kyoto, the Sagano Bamboo Forest stands tall and proud and is an almost shocking contrast to the urbanity surrounding it. As the bamboo stalks sway in the wind, they make a magical sound that you really shouldn’t miss. The burning bush of Japan, Kochia Hill is set ablaze at the end of the wet season to give the hill a magnificent red colour. The scrubby little kochia plants (summer cypress) are located at the Hitachi Seaside Park. The Oz like winding roads through the park only add to the magic of the place. 4. The Vine Bridges of Iya Valley

Remade every three years, The Vine Bridges of Iya Valley are strung over misty gorges, lush greenery, clear waters and thatch-roofed houses that one would expect from a Japanese movie in the 1940s.  The vine bridges were initially made to help dacoits cross the river. Today, the largest and most is the Iya Kazurabashi Bridge. It spans almost 150 feet over the valley and is at a height of 50 feet above the water. The Vine Bridges of Iya Valley

Just a five minute walk away from Himeji Castle in Hyogo Prefecture, Japan – The Kokoen Garden is nothing short of spectacular. They comprise of nine beautiful, landscaped gardens. The best time to visit is the Cherry Blossom season, although the gardens are gorgeous all through the year.

Best Time to Visit: March to May There are nine steaming hot springs in Beppu City. Chinoike Jigoku, which translates to Bloody Hell Pond is nothing like the other eight springs.  The black (or should we say red) sheep of the family, sits at a not so comfy 78 degrees Celsius. Rich in iron oxide, this spring bubbles in shades or deep red. Unfortunately, the history of Chinoike Jigoku is just as dark. The spring was used to torture people and then boil them to death.

Best Time to Visit: All through the year so long as you don’t step in!
Also Read: Think You’re Brave Enough To Try The ‘Roller Coaster Bridge’ In Japan? Right at the edge of Japan’s ‘Suicide Forest’- Aokigahara, lies a A 70-foot-deep ice cave formed by lava from Mt. Fuji. In fact Aokigahara is full of these underground caves and if you’re not careful, you just might fall through one! On of the biggest caves is the Narusawa Hyoketsu. It has stairs leading down into the 70-foot-deep cavern. Reach the bottom and you’ll be greeted with crystal clear ice and a stunning light show as the ice reflects and glows. A magical, mossy forest that is said to house tree spirits. The thick moss absorbs all the sound and the lush greenery surrounds you with an intense calm. Straight out of a Game of Thrones scene, Shiratani Unsuikyo Ravine has lovely hiking trails.

Best Time to Visit: All through the year but you get to see the Cherry Blossoms between March to May. 9. The Firefly Squid of Toyama Bay

A few years ago, pictures of the bioluminescent waters of the Maldives did their rounds  Toyama Bay has been experiencing glittering waters for several years now. Thanks to Watasenia scintillans or the Firefly Squid, the port waters light up in shades of shimmering blue. The Firefly Squid have photophores at the end of their tentacles that light up like glow sticks at a rave.

Also Check out: Now Fly Non-stop Between India And Maldives The Firefly Squid of Toyama Bay

Clear waters and umm friendly bats – that’s what you can expect at the Ryūsendō Cave. It is one of the three largest limestone caverns in Japan. It is made up of extensive underground galleries that shadow eight deep, sunless lakes. Home to breathtakingly clear blue water, Ryūsendō Cave is an unbelievable sight. In fact, there are still large, unexplored parts of the cave that researchers are trying to access. You may even come face-to-face with some rare bats like the Eastern long-fingered bats, Brown long-eared bats, Greater horseshoe bats and Hilgendorf’s tube-nosed bats. Which one should you pick? EVERYTHING! Japan has prettiness all around. It’s time for you to discover it.