5 Reasons You Must Visit Mykonos In Greece 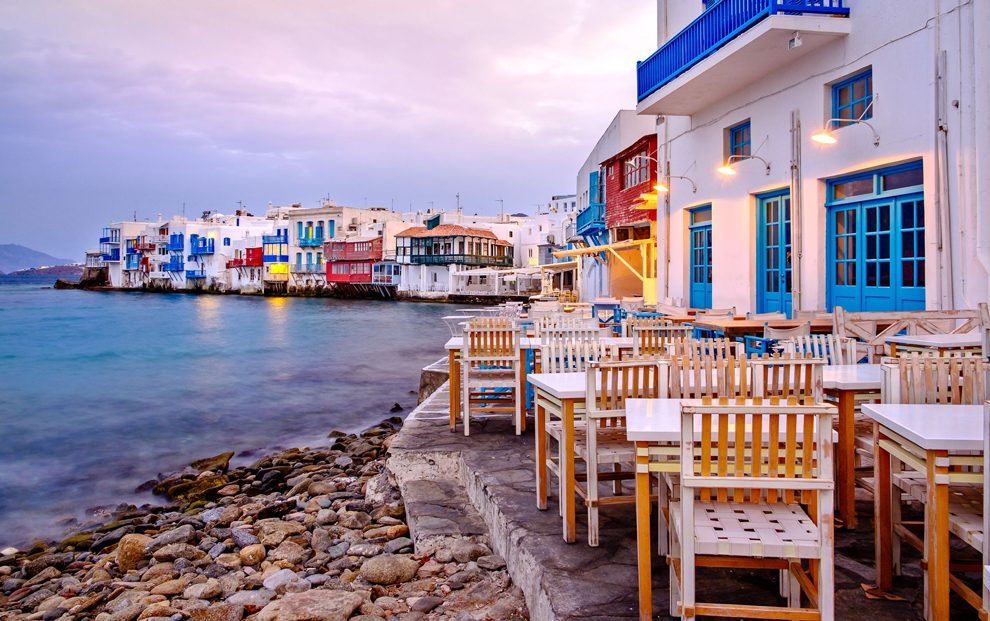 The idyllic visual of blues against the whites, the sunsets, cobbled pathways, bougainvilleas and a frequent glimpse of an A-list celebrity, Mykonos has topped itself as the to-be island in the Aegean Sea. Pumping new music, chic cocktails, luxe villas with a backdrop of 16th century old marvels, this town nails the new meets old and how! Here are our top 5 picks for why you should visit Mykonos.

Yes, who’d imagine that with the Mediterranean so close, the sun so bright, the beaches so vast and water so blue, one could while away the nights thumping to some kick-ass music in some of the hippest clubs. But contrary to one’s perception of Mykonos as the quintessential island getaway, the nightlife here is crazier than its sounds! No wonder you may be able to spot some celebrity in some cranny of the island. With all the glitz, glam and beach bars, some could mistake it for Ibizia!

Clubs to look out for:

The Super Paradise Beach Club on Paradise Beach is one of the most popular beaches in Mykonos where party doesn’t stop till the Sun’s out! Cavo Paradiso, Tropicana and Paradise Beach Club are some of the other hot destinations for parties. ‘Chora’, the cobble-stone maze-like part of the town is where you can find some other chill spots to hang at. Don’t be surprised if you find yourself in gay bars. Thanks to Jackie O, Mykonos has become the bastion for gay travelers; and the pubs, beaches and hotels are very open to the LGBTQ community. Lola Bar, Porta and Jackie O are popular gay bars!

Also Read: Top 10 Party Destinations In The World For A Perfect Bachelor Trip No, that’s not an exaggeration. If you’re addicted to your Instagram or your DSLR, Mykonos is a great place to showcase your skills. Even, if you aren’t that good, the town makes up for lack of your skills. Every crevice of this town is replete with opportunities to get your cameras out.

Where Can You Get The Best Photos?

Little Venice is the sea-side part of Chora, where 18th century houses, elegant houses, quaint cafes, tasteful galleries line up the coastline. Aptly named, this is the most picturesque spot in Mykonos, where these charming structures meet turquoise waters making you reminiscent of Venice. Head to one of the many restaurants that line along the port to catch the best views! The Mykonos Windmills are another iconic location for photos. Southeast of Chora, between the harbor of Alefkandra and the neighborhood of Neochori stand 7 windmills that proudly represent the past of Greece. These windmills of Kato Myloi were first built in 16th century and have now become the iconic landmark of the islands. If these windmills don’t make for a good photo, then what will? The Armenistis Lighthouse dating back to 1891 is another spot from where the Aegean can be viewed at its best. The lighthouse itself makes for a splendid photo background, but the views from there are great for panoramic pictures of the Cyclades! Isn’t the mazed Chora a perfect place for your Instagram? Source: flickr.com

Get your swim suits out; it’s time for some vitamin SEA! Beaches of Mykonos are as beautiful as its interior towns. The shore is always brimming with tourists looking for some sun and some for cocktails. Sun-beds, umbrellas, clean tan lines, summer hats and the non-stop cocktails, one visit to the beaches of Mykonos and you’re transported to utopia!

Paradise Beach is the go-to beach for sundowners, beach clubs and water sports activities. Super Paradise Beach is where the crowd is young and where the water matches the azure colors of the sky. Paraga is for the foodies, where you are served scrumptious meals with a spectacular view! If you’re looking for beach side cafes and sunbathing by stretching on sun-beds, Ornos should be your go-to. Families can head to Platys Gialos for some sand and sun or Aghios Ioannis for a quality family time.  Kalafatis, Lia, Elia, Agios Sostis are some quieter, partly organized beaches. Nudism is highly popular in Mykonos, so people covered in nothing but skin at these beaches should not surprise you!

Also Read: The 9 Most Colorful Beaches In The World It shouldn’t come off as a surprise that this Greek Island can boast of so much ancient history! The Panagia Paraportiani is a complex of 5 churches that were first created in 16th century and stand as an important archaeological site. These white-washed asymmetrical churches have become iconic to the Greek island and also the most photographed. A spherical dome protruding out with a small wooden door opening to the strong winds of the Mediterranean is a great example of architectural marvel in the olden days.

If you’re curious about discovering more of the ancient civilization, a cruise to Delos Island is where you’ll find your answers! This UNESCO World Heritage Site is known to be The God of Music and Light – Apollo and Goddess of Wilderness – Artemis’ birthplace. Its mythological significance had once made this island a religious and political center. Wander about the ancient ruins and discover more of their artifacts at the Archaeological Museum of Mykonos. The Windmills are another historic site. Unravel the mysteries of the ancient civilzation at Delos. Source: http://www.greece-is.com

Who has ever denied Greek food?  Moussaka, Gyros, Meze, Kopanisti – name it and your mouth starts watering. Mykonos’ beauty matches up to its quality of food. From local carts to posh restaurants, none disappoint. Do sample on meaty kebabs, meze, louza and moustokouloura – local favourites of the island. Like every tourist destination, there are a few restaurant and cafes that people flock to.

Restaurants and Cafes To Check Out:

Katrin, M-Eating, Jackie O, Kiki’s Tavern, Bill & Co are few places where food is the perfect amount of palatable, the view great and the welcoming smiles wider than any!

Also Read: 5 Delicious Greek Foods That You Have To Try In Mumbai Food with a view, only in Mykonos. Source: www.greece-is.com

Best Time to Visit: Mykonos is suitable all year-round. Depending on the type of trip you want to have you can choose from the low, mid and high season. April, May and October are low season months when the tourists have not yet started coming in and the prices are reasonable. The town is quieter and the weather is pleasant. June – September are mid-season months when the tourists are around, but the town is not jam-packed. The weather is comparatively better than July and August, nightlife is thumping and prices a little higher than the low season. July and August are two months when the party never stops. Hot weather, crazy beach parties and sky-high prices. If you want to see the glitz and glam of Mykonos this is the time!

Approximate Cost: A direct two-way flight to Mykonos can cost up to 1, 00,000. A cheaper option can be to fly to Athens and take a ferry to Mykonos from there on.