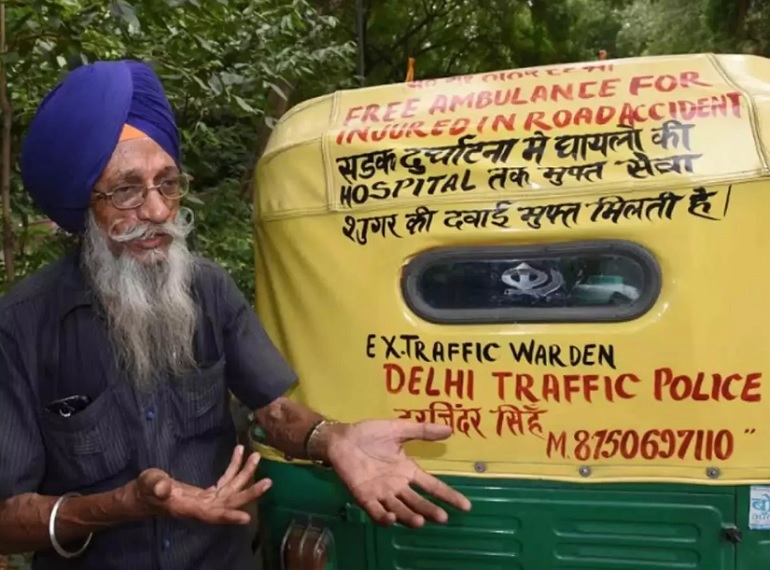 How many times has it happened that car accident victims die on the road because the bystanders did not do anything, or the help they needed wasn’t made available to them on time? Well, Mr. Harijinder Singh, a 76-year-old former traffic warden has been patrolling the roads in accident-prone areas in Delhi, to make sure that it doesn’t happen with anyone.

Having seen many accidents during his time as a traffic warden, Harijinder Singh has pledged not to let another innocent victim die on the road due to negligence. Every day after finishing his work for the day, he drives around in accident prone areas of the city to seek out any injured road accident victims.

In case he does find anyone in this condition, he immediately rushes them to the nearest hospital. His auto is the only one in the entire National Capital Region that acts as an ambulance and is fully equipped with emergency medicines and first aid which he gives away free of cost. Any money he gets via donations, he uses it to get more medical supplies.

Harijinder Singh has also done a course in first aid, to ensure that in case of emergency any service he provides is perfect and everything the injured person needs. His strong beliefs help to make the world a better a place. For him, the satisfaction that he gets from helping the people and the gratitude that he gets in return is everything he needs to keep his spirits up throughout the day.

With the number of cars that ply the road, many road accidents take place all across the city daily. In many cases people do not make it because of not getting the help they needed on time, and sometimes the people around just watch without helping. The 76-year-old auto driver doesn’t want to be one of them and does all he can to make the city a better place for the people.

Also Read: Delhi Metro’s Yellow Line Will Get Free WiFi By The End Of This Year

When people in the city learned about his story, they saw a ray of hope in a world that is a lost cause and took to Twitter to applaud his efforts.

Meet auto driver Harjinder Singh from #Delhi, who turns his auto into an ambulance to save lives of accident victims.

While there are so many people in this world who don't give way to ambulances, Mr. Singh’s act of kindness has saved hundreds of lives in times of emergency. 🙏 pic.twitter.com/AVC1mdcHdD

Wonderful people like these restore our faith in humanity. ??

These are the true heroes. They should be given due recognition and respect. Shri Harjinder Singh is truly following the Guru’s bani( teachings). Waheguru bless him

We salute his spirit, and hope that more people take a page from his book when it comes to helping those in need.

6 Different Ways In Which Janmashtami...