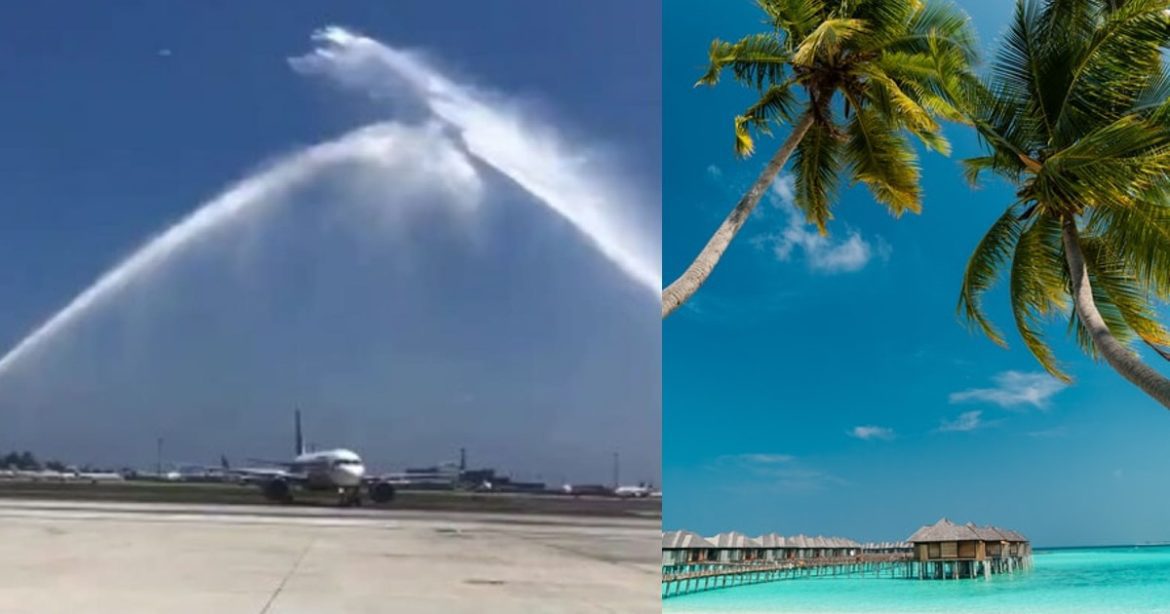 On February 21, the Air India flight AI-267 was welcomed at the Maldives’ Male airport with a grand water cannon salute. The aircraft was greeted with this memorable gesture to commemorate 46 years of air service between India and the Maldives. For Air India, it marked the beginning of taking to skies once again, officially becoming part of the Tata Group after 69 years of its nationalisation. Read on to know more and watch the viral video.

The Tata Group-owned Air India took to Twitter to share a video clip of the grand water cannon salute showered on the flight after it reached Male airport in the Maldives. Air India flight AI-267 was welcomed with water propelling from either side of the massive aircraft, as it slowly glided on the runway. The video clip went viral, garnering over 2000 views in just an hour. A Twitterati exclaimed that not many airlines that fly to the Maldives can claim a history of flying for 46 years. The water cannon gesture is a tribute to celebrate the 46 years of air service between the two nations.

Also Read: Ileana DCruz Sunbathes In Blue Waters Of The Maldives And Goes For A Sea Dip Too

#Fly AI: AI-267 was welcomed with a water canon salute as it landed at Male airport #MACLmedia today to commemorate 46 years of air service between India & Maldives.

Air India operated its first flight from Trivandrum to Male in Feb 1976. pic.twitter.com/lGqfrYFWuo

Also Read: Boss Takes His Employees On A Trip To Maldives To Thank Them For Their Hard Work

Air India First Flew To The Maldives In 1976

In the Twitter post, Air India shared some interesting trivia. Air India operated its very first flight to Male from Thiruvananthapuram in February 1976. With the completion of 46 long years, the bond between the two countries for air travel service continues. There’s also an air bubble arrangement between India and the Maldives amid the coronavirus pandemic. These temporary arrangements will help ferry passengers between the two countries until international commercial flights in India resume. Meanwhile, here’s how you can visit the Maldives on a budget.