American Chef Makes Butter Chicken Pizza And We’re Already Drooling; Here’s How You Can Make It Too

Butter chicken and pizza are two of our favourite foods. But have you ever thought of a combination of these desi and videsi delights? American Culinary Producer Kimlai Yingling took the food mashup game a notch higher and made absolutely delectable Butter Chicken Pizza. She made the pizza using traditional naan bread and it looks drool-worthy. The recipe of the “Savory & Delicious Indian Butter Chicken Pizza: Food Mashup” has been shared on the Allrecipes YouTube channel and it has grabbed loads of love and praises from foodies.

Yingling Gives A Glimpse Into The History Of Butter Chicken

In the video, Yingling has given a glimpse into the history of butter chicken. Speaking about butter chicken, she says, “Butter chicken is a staple in South Asian cuisine. The cultural history of this dish is really rich. Butter chicken originated in Delhi during the 1950s.” She adds that Kundan Lal Gujral was the brainchild of the recipe. She also says that Gujral came up with a savoury sauce made with tomatoes, butter, cream and spices. He added some pieces of tandoori chicken to it and that’s how butter chicken was born. 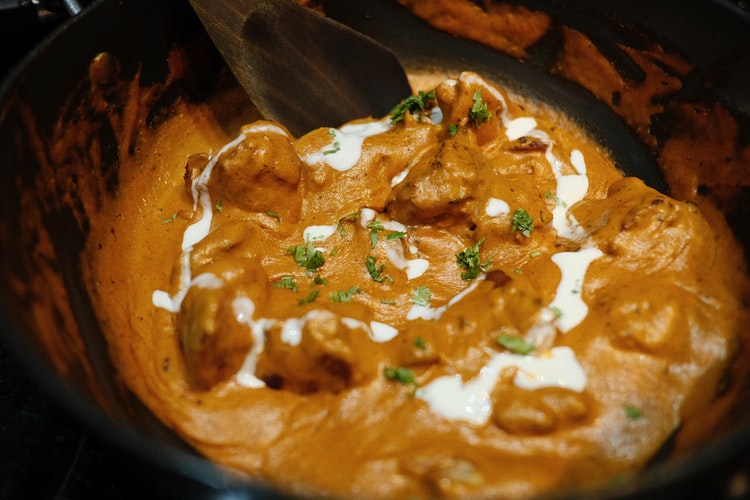 How To Make Butter Chicken Pizza?

According to Yingling, you will firstly be needing marinated butter chicken along with the butter chicken sauce to make butter chicken pizza. She also suggested using chicken thighs as they are ‘juicer and cost-effective’. Cut the boneless chicken thighs. For marinating, you’ll need yogurt, ginger paste, garlic paste, garam masala, cumin, turmeric, red chilli powder and salt. Mix all the ingredients together. Put these directly on the chicken. She has also shared the recipe for the sauce. The marinated chicken pieces have to be grilled and then dipped in the sauce. She then takes pieces of naan bread, smears them with the sauce, tops them up with paneer cheese, jalapenos and then finally chicken chunks. She then bakes the pizzas and the result is making our mouth water. Check out the full recipe here:

Also Read: 6 Butter Chicken Places In Delhi That Will Deliver At Your Doorstep

Try it for yourself at home at let us know your thoughts in the comments section below.