Madhya Pradesh boasts of some of the most picturesque tourist spots in India. From Kanha National Park, Bandhavgarh National Park and Gwalior Fort to Orchha Temple, Udaigiri Caves and Bargi Dam, the list is impressively long. While these are some of the popular places, there is one picture-perfect destination in the state which also offers a 100-feet high cliff jumping into 300 feet water. Bhedaghat is a hilly town on the banks of the river Narmada in MP’s Jabalpur district. Bhedaghat is home to one of the most magical waterfalls, the Dhuandhar Waterfall.  Around an hour away from the Dhuandhar Waterfall, lies the breathtaking Marble Rocks where one can engage in the adventurous cliff diving activity. One of the things that tourists adore at Bhedaghat is the one-hour boat ride on the Narmada, which gives them an opportunity to experience the splendour of the sun-kissed mighty rocks, that sparkle beautifully during the afternoon. The boats also have guides who tell the stories of the place and also give interesting commentaries. The evening boat-ride, with the sun gradually setting in the backdrop, is soul-captivating too. Now, if you have got an adventurous soul, you can trek up the 100-feet high cliff out here and dive into the 300 feet deep water to satiate your adrenaline rushes. But don’t dare to take part in the stunt if you’re an inexperienced swimmer. Also Read: I Got Stuck For 35 Days In Kanha Jungle During The Pandemic And It’s The Best Thing That Happened to Me!

Some little boys jump off the cliff into the deep water just for the tourists to watch them and pay them ₹50. The boys jump and then swim towards the boats to collect the money. They put their lives at risk, multiple times in a day, to make a daily income of ₹800-900. Many of them are the kids of the boatmen, and their parents encourage them to do the stunt so that they learn swimming and make themselves capable of earning. While it might be thrilling to watch them dive into the water, the behind-the-scenes story is somewhat heartbreaking, and inspiring too. They overcome their fears each day to entertain the tourists. 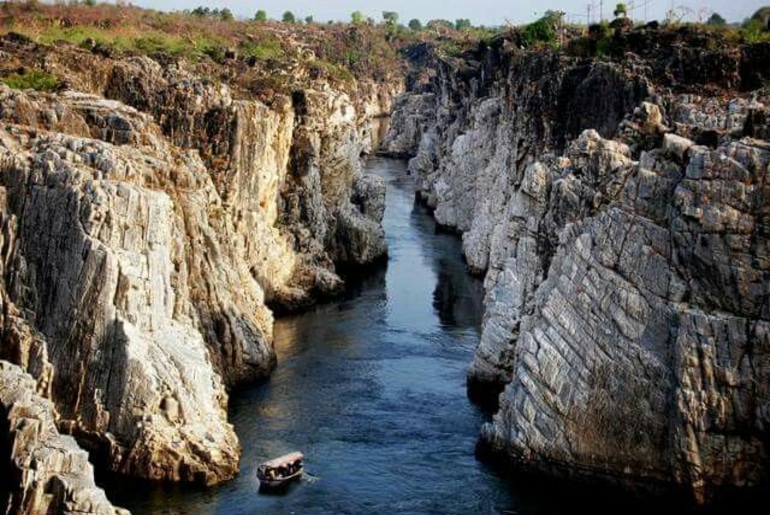 Also Read: This Gorgeous Boutique Hotel In Madhya Pradesh Is Perfect For A Secluded Vacation In The Hills

If you plan a trip to Madhya Pradesh, definitely keep Marble Rocks on your bucket list. And speaking about the little boys, many people bargain with them for money. But if we pay them a little extra, it will make their day. After all, they wholeheartedly put their efforts to light up our moments. Meanwhile, here’s a virtual food trail to Jabalpur’s Fuhara Market: