Cops, Helicopter Arrive To Catch Tiger On The Loose Only To Find It’s A Sculpture 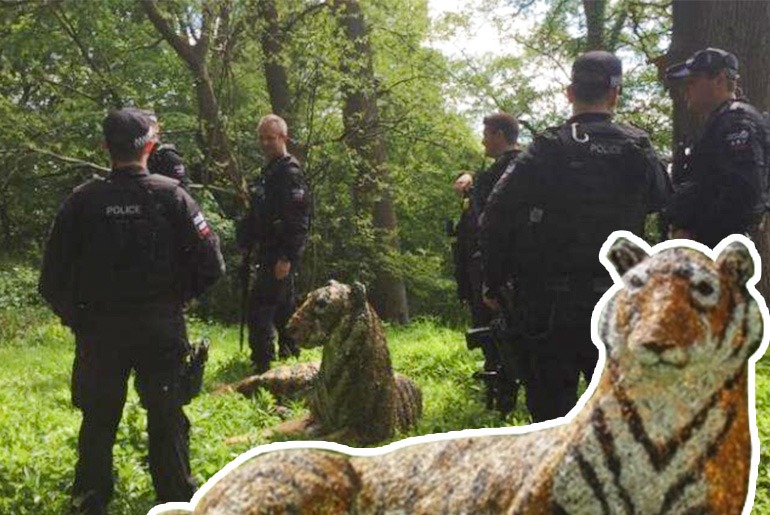 by Sanjana Shenoy May 5, 2020 260
FacebookTwitterWhatsappEmail

After Ek Tha Tiger and Tiger Zinda Hai, we have the perfect story, based on a true-life incident, to complete the ‘Tiger’ trilogy. Residents of Kent countryside in England spotted a tiger on the loose while heading for their morning walk. With abundant news stories about wild animals on the prowl in urban areas during the COVID-19 lockdown, their alarm bells rang. And the horrified residents immediately called for help. Armed cops and even a helicopter arrived on the scene to investigate the matter, only to find tiger sculpture made of chicken wire and resin. Juliet Simpson, an 85-year-old resident of Kent countryside in England made a lifesize sculpture of a tiger 20 years ago. Her neighbour rang up to tell her that the police were following reports of a wild cat near her house in the village of Underriver. “My son Duncan rang up and said there were armed police on the hill leading up to my house,” Simpson said. “Ten of them! By then I could see the helicopter above, and I thought goodness me. So then I walked up the road and saw the police Land Rover. I went up and said: ‘Do you want to be introduced to this tiger?’” According to Juliet Simpson, the tiger sculpture made of chicken wire and resin had never bothered walkers using the footpath. Previously dogs had been alarmed by it but there were no serious fears. One police officer felt that escapee tigers were on the public’s mind courtesy the widely watched Netflix series, Tiger King. Twitter user, Martha Simpson tweeted about this incident. She informed that her grandmother was surprised to see ten armed policemen and a helicopter approaching her home. But as it turns out they were coming to talk to her about the tiger in her backyard. But what they didn’t realise was that the tiger was actually a sculpture made by Martha’s grandmother almost two decades ago.

Wild Cat Basking In The Sun

This bizarre incident of armed cops and a helicopter arriving on the scene to nab a wild cat only to discover a tiger sculpture basking the sun gave netizens a field day. The talented sculptor, Juliet Simpson was herself quite amused by this incident. She stated that many people have very little knowledge about how animals behave in the countryside. She added that any escaped cat would be in a state of shock and would not be basking in the sun, looking up at the nearest footpath. Did you know Tiger At NYC’s Bronx Zoo Tests Positive For Coronavirus; Considered To Be A First? Juliet Simpson revealed that the police officers who came to investigate, found her tiger model to be very lifelike. They said they arrived to respond to people’s concerns. This bizarre incident definitely introduced us to a badass 85-year-old sculpture and her prized wild cat, owning the countryside of Kent.