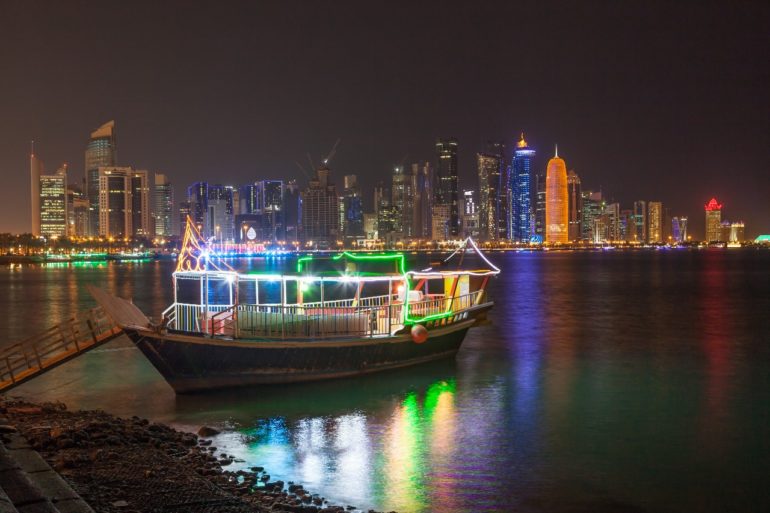 A soul-stirring blend of Arabic traditions and modern opulence, the Dhow cruise on Dubai Creek is an unforgettable sailing experience.

Cutting through the heart of Dubai lies the saltwater creek dividing the city into two halves. The Dhows were traditionally designed wooden boats built by the Arab fishermen community for venturing into the Indian Ocean and Red Sea.  These Dhows and now decorated and modernised to give tourists a glimpse into the past with a touch of extravagance. The architecture lining the creek is particularly stirring; a fusion of golden and camel coloured traditional barajeel built in middle eastern style echoing timeworn whispers and Dubai’s shimmering skyline flaunting skyscrapers and towers on the other side. Adding on to the view, an Arabic spread to feast on and live entertainment to go with the culinary indulgence makes the Dhow cruise all the more memorable.

Also read: Gevora Hotel, The Tallest Hotel In Dubai Has Opened Up With A Height Of 356 Meters There are multiple tour operators who conduct this tour, so your experience may vary depending on the operator you opt for. However, a typical dhow cruise follows this pattern. After stepping into the decorated dhow you’re welcomed onboard with a silver glass of Kahweh (Arabic coffee ) and dates. The dhow cruise lasts for 2 hours and during this period, you are served a delicious buffet dinner accompanied by live performances like belly dancing, tanoura, singing, magic shows and puppet shows. The dhow cruise is touted to be the ultimate romantic experience but kids and families are bound to enjoy this cruise alike.

Also read: Forget Mumbai! You Can Now Catch Everything Bollywood In Dubai

Dhow Cruise on Marina Bay, Dubai has recently begun, so make sure you don’t confuse the two. There are sunset and afternoon dhow cruises as well, so you could pick one that suits your schedule. Most Dhows have an open upper deck and air-conditioned lower deck making the dhow cruise a popular excursion during peak summers as well. Some cruises come with the option of pick-up and drop-off from hotels too. A few recommended operators for the Dhow cruise on Dubai Creek are as follows :