Vietnam — The Land of Blue Dragon. I had always known this charming country for its beautiful beaches, rivers, Buddhist pagodas, French colonial landmarks, delicious food, and war history. But when I accidentally stumbled upon Bùi Viện Street in Ho Chi Minh City (formerly Saigon) on my trip to the Southeast Asian country, I was astonished because what I saw there was unexpected. Vietnam has never been known as a party place. All party animals flock to Bangkok in Thailand to enjoy the nightlife. But after seeing the party scene of both the places, I can say it without a single trace of doubt that this party street in Vietnam will make you forget the nightlife of Thailand.

Also read: I Did A Solo Trip To Thailand, Vietnam &#038; Malaysia In ₹80K Including Flights, Stay &#038; Adventure Sports

The bright lights come up as the sun goes down. A number of bars, restaurants and clubs open up, and small chairs and tables are set onto the sidewalk. Soon the whole street is filled with backpackers looking to eat, drink, and party. If you are a non-vegetarian foodie, then there are all kinds of Vietnamese delicacies to choose from the street vendors. You will see a lot going on there, for instance, girls trying to lure men into massage parlours and shady characters talking to others in signals and getting followed by others. For an average visitor like me, minding own business and ensuring the safety of belongings is all that’s required.

The moment I entered the street, I was bathed from head to toe with colourful lights coming from huge nightclubs. The arrival of the Lunar New Year (January 25, 2020) had further enhanced the pomp and show of the whole place. The music of loud party songs entering my ears made me dance to its tunes. After strolling on the street filled with happy travellers, especially backpackers from all over the world enjoying their drinks and dancing outside the clubs, I made my first stop at 86 Pho Tay, which was shining brightly with colourful lights. Vietnam Gets A Hotel With Gold Plated Bathtub And Toilet

I stepped inside and saw a whole new party world. The music was so loud that it made me forget everything else that was happening in my life. There was a stage where two tall and attractive girls were dancing. When they got down after giving their exceptional performance, it was time for others to show off their dance moves. The music was so good that I couldn’t stop myself from going on that stage and dance with others.

As the party scene started getting intense inside the clubs, the entertainers on the street also levelled up their game. I saw a guy juggling on a unicycle, young boys breathing fire, and a man engaging the audience in card tricks.

The Mystery Behind The Balloons

When I was at another club named Miss Saigon, I saw almost everyone blowing balloons. I kept on wondering “Why everyone is doing so? Instead of enjoying their drinks or dancing or chilling, why they are wasting their energy on balloons? What they are going to do with that?” Then I thought “Maybe they will be decorating the club since it’s New Year time. But still, why the guests are doing that?” Totally confused, I asked a waiter about that. He explained that these are helium balloons, and one has to breathe in the gas from the mouth to experience light-headedness. Well, that was something absolutely new for me to learn in Vietnam!

The thrill and energy of Bùi Viện Street, which is the heart of Ho Chi Minh City, is something else. Once you are there, you will forget everything. Such are the vibes of this place! It is one of the most vibrant and exciting parts of the city that one can experience. These 3 Indian Boys Went On A 3000km Around Vietnam for 18 days in Just ₹90,000. 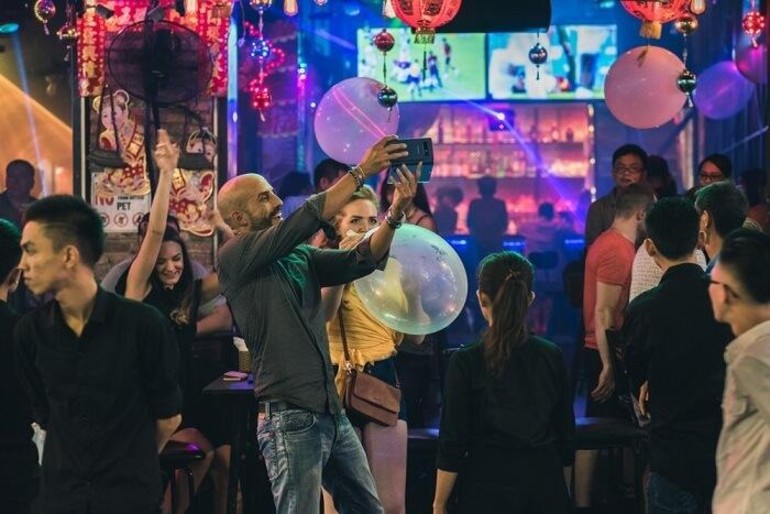 Opening hours: From 07:30 to 18:00 on all days (including public holidays and New Year holidays)

Going to this place will definitely make you realise that you are leading such a privileged life. You will come across alarming facts that would make you cry. So if you are a weak-hearted person, then think twice before going. Such is the horror of the Vietnam War!

War Remnants Museum has researched, collected, stored, preserved, and displayed documents, images, and exhibits on the evidence of crimes and the consequences of the Vietnam War, which was fought for nineteen years. At the entrance, you will see helicopters, aeroplanes, tanks, landmines, bombs, etc. that were used in the war. The history of the war and other important details are explained there via more than 20,000 documents, artefacts, and movies. It includes the collection of photos of the American invasion war in Vietnam, crime of aggression war, prison regime, world’s support towards Vietnam, and most importantly, the consequences of Agent Orange during the war the effects of which can be seen today also. Isn’t that heartbreaking?

Undoubtedly, you will feel depressed, but you must visit this museum to understand the importance and urgency of world peace. Living freely without any fear is our fundamental right, and it should not be put on the back burner. The destructive influence of Agent Orange has reached down so many generations in Vietnam and you yourself can see that. What American soldiers did to Vietnam is brutal beyond my imagination, in which they also suffered a lot. My heart goes out to everyone who is/was in pain. I pray that this kind of devastation never retakes place anywhere in this world.

If you want to buy local handicrafts, branded goods, Vietnamese art, and other souvenirs, then this is the best place in Saigon. And when you become tired after bargaining at shops, then cool off with any of the cold beverages and enjoy the taste of hawker-style Vietnamese cuisine at a stall inside the market.

Avoid going there during the hottest part of the day as it can get very crowded. The evening would be perfect. The eateries inside the market sell real street-style local food, including wok-fried noodles, fresh seafood, barbecued fish, crispy rice pancakes, and steamed cakes.

Take a stroll around this market to experience authentic Vietnamese vibes. Things you can purchase from here include lacquerware, bamboo goods, arts and crafts, clothes, luggage, watches, spices, nuts, local fruits and vegetables, and electronic goods. The market is so huge that it may become a little difficult to navigate.

While roaming around the bustling streets of Ho Chi Minh City, I read somewhere, “In Vietnamese, we say Tình for something that is more than love.” I really liked this quote because of the way I felt there was definitely more than love. Once war-torn, it has seen a lot of cruelty that one can bear. But the way it is progressing and opening its arms for travellers is worth appreciating. I was in love with its people who were kind and friendly even if unable to understand English in non- touristy places like Nha Trang and Da Nang. In my next blog, I will take you on my journey to these coastal cities in southern and central Vietnam, respectively.

Keep travelling! (after we defeat Coronavirus) Till then, Stay Home Stay Safe.