Dubai Airshow Opened Its Gates To The Aviation Industry; Here’s Everything To Know 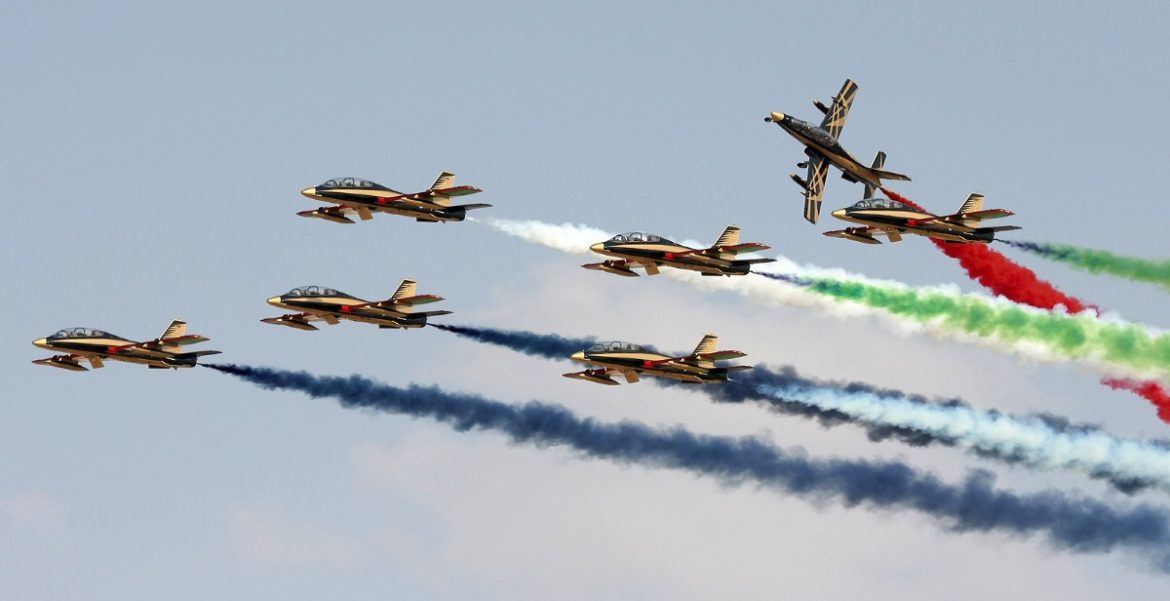 The annual air show in Dubai began on November 14th. To a world still suffering from the effects of the pandemic. In addition, the aviation industry has been severely harmed by the coronavirus, but it is recovering. Initially, the aviation trade show’s stars were Boeing and Airbus. Competing for multibillion-dollar Gulf-based airline acquisitions and ironing out the last elements That, too, only minutes before two news conferences in a row. This year’s five-day display, on the other hand, is predicted to be more subdued than previous years. Because of the silence around flying and travel during the Covid-19 pandemic.

One Of The Largest & Most Successful Airshows In The World

The first day of the air show drew attention to defence and military weaponry. Russia and Israel were among the countries involved. The sale of 255 new aircraft to Indigo Partners’ low-cost carriers was the day’s biggest commercial agreement for Airbus. The agreement covers the purchase of 102 new planes by Hungary’s Wizz Air. Frontier Airlines in the United States has 91 seats, Volaris in Mexico has 39, and South American JetSmart has 23. A321neo and A321XLR aircraft are included in the deal. The deal would be worth more than $30 billion at pre-pandemic Airbus list prices.

Airbus has also received an order for two more A330 aerial refuelling planes. With the United Arab Emirates Air Force, the country’s Airbus multirole tanker transport fleet has grown to five. The Checkmate fighter jet from Russia was the highlight of the platform outside the exhibition hall. Which was displayed to the media in a specially constructed hanger. With a mirrored ceiling and a display of laser lights. 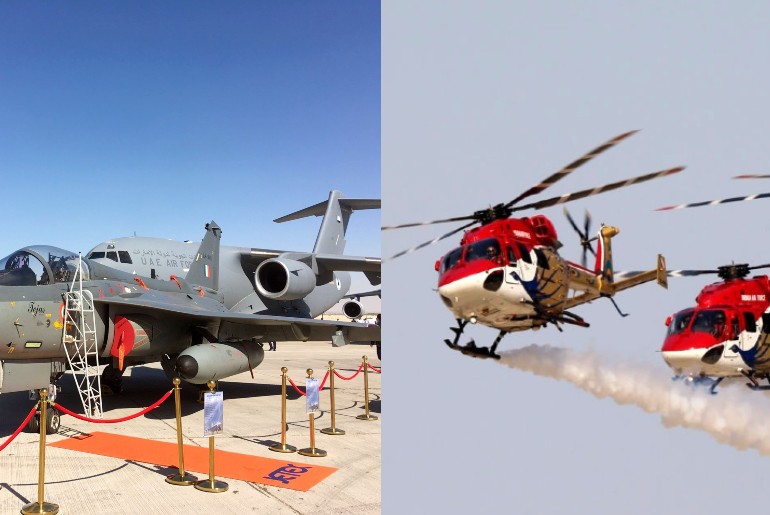 In a theatrical promotional video, the Checkmate rocketed through burnt orange skies. Blasting away targets in the desert Music was playing in the background. The plane’s features were also disturbed by a thunderous voice-over. The air show also features more than 100 American companies. Defence behemoths Lockheed Martin and Raytheon are among them. Meanwhile, Brazil’s President Jair Bolsonaro strolled the airstrip outside the Embraer exhibit. The cabin of the company’s huge C-390 Millennium transport aircraft is being examined. Greeting throngs of reporters with a smile and a wave. The multiplicity of helicopters was examined by French Defense Minister Florence Parly. At the Airbus Pavilion, there are also maritime patrol aircraft. Surrounded by uniformed French airmen.

Boeing’s new 777-9 passenger plane arrived from Seattle after the aircraft’s longest journey to date. While it continues to be tested and awaits regulatory approval, It will be the world’s largest and most efficient twin-engine jet, according to Boeing. Emirates, the Middle East’s largest airline, has purchased 126 of these 777Xs.

Airbus showed journalists a mock-up of the A320neo. Which had been turned into a high-end business jet with a huge bed. There’s a walk-in shower and a large sitting space with couches and coffee tables, but that’s not all. CATIC, China’s state-owned defence company, demonstrated a variety of anti-aircraft missiles. Fighter jets and munitions.

Also read: Just A Selfie Is All You Will Need To Check Into Dubai Airport In Future! 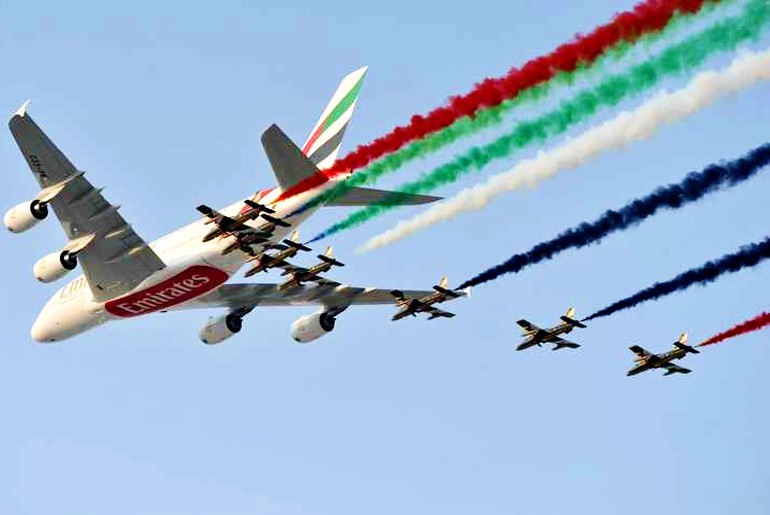 At the air show, Israeli firms displayed their equipment for the first time. Following the reopening of diplomatic relations between Israel and the United Arab Emirates last year. Israel Aerospace Industries, a state-owned business, displayed manned and unmanned naval and aerial drones. Rafael Advanced Defense Systems of Israel demonstrated its drone dome. This system uses lasers to identify and kill drones. The air show will include six Israeli firms in total.

Near Dubai’s Al Maktoum International Airport, the air show is taking place. Dubai’s major airport now has a second, smaller international hub. Which airport is the busiest in the world for international travel? Despite the fact that commercial travel is still a risk because of the pandemic, cargo volumes have already surpassed pre-pandemic levels. Some airlines have taken away seats from grounded passenger flights and converted them into cargo planes.

Boeing announced plans to expand three conversion lines in response to the rising demand. There are two in the UK and two in Canada. Converting commercial planes into freighters. Release has also placed an order for 11 Boeing 737 freighters.

Also read: Dubai Gets A New $82 Billion Commercial Airport And Here’s Everything You Need To Know! 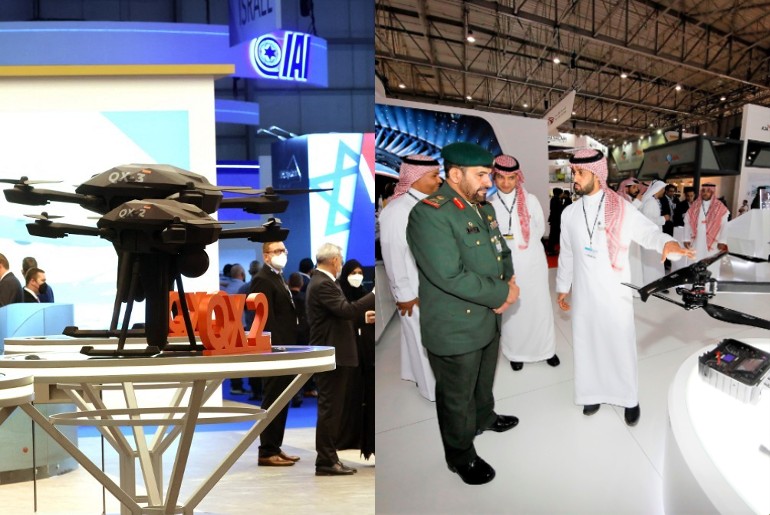