Escape Mumbai In The Middle Of Mumbai – Khotachiwadi 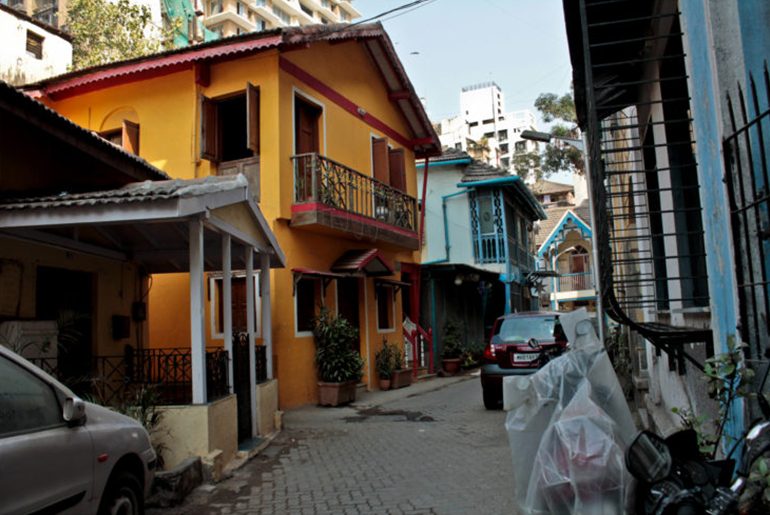 Khotachiwadi is a small heritage village amidst the high rise buildings of downtown Mumbai.

Khotachiwadi is a 200 year old Portuguese style heritage village in Girgam, South Mumbai. Its fascinating history, narrow lanes and colorful houses have brought this hamlet a lot of attention and was declared a protected historical precinct in 1995. The reason of the acclaim for khotachiwadi is that people appreciate to see how things looked like a century ago, since the houses and character of this district remain well preserved. It was founded by a local named Khot in the 18th century and translates to ‘Garden of Khot’ in Marathi.  A brisk 4 min walk from the Charni road station will propel you into the past, a rather colorful and Portuguese past. The area would consist of 65 houses when first founded in the 18th century, but since the number of houses have come down. Now there remain about 28 houses that were built over 100 years ago. Around the area lie many small businesses, old timely houses and religious institutions. Chatholics are wide spread here, giving Khotachiwadi a very Goa kinda-vibe. There is a chapel here and alongside a mural depicting the Virgin Mary with infant Jesus. The chapel was constructed around 1900, as an offering of thanks by the villagers who survived the plague. A 5 min walk from Charni Road station.
We would recommend coming to Khotachiwadi on a Sunday afternoon when the atmosphere is very relaxed and spending some time by the chapel watching the people go about their day.