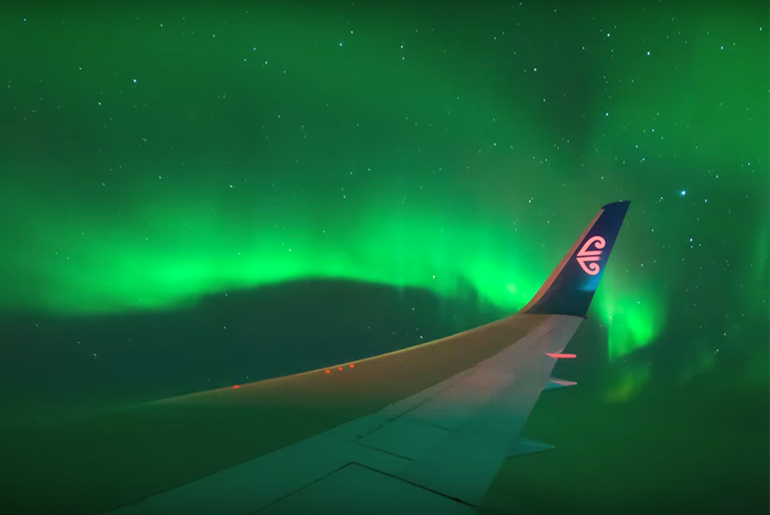 Experience a once in a lifetime magic show put on by Mother Earth herself as you fly into, and right past the Southern Lights for a glorious eight hours.

Imagine having to sit in a plane for eight straight hours and cross four date lines. Sound tedious? Well, not on the specially chartered tour aptly called the Flight To The Lights. This is a flight you’re not going to sit back in. What you will do is watch Mother Nature in all her glory as she creates a river of green lights that dance and sway in a spectacle that can only be described as a once-in-a-lifetime opportunity.

Also read: 5 Travel Hook-up Apps You Must Try If You Are Single And Ready To Mingle Traveler

The charter flight to the Aurora is the first one of its kind in the Southern Hemisphere and definitely what you need to add to add to your bucket list. The flight took off from the Dunedin Airport in New Zealand on Air New Zealand flight NZ1980, a Boeing 767-319(ER).

The flight was conceptualised by astronomer and Otago Museum Director, Ian Griffin. The idea came to him when he was flying as a guest aboard a NASA observatory plane.

How Does It Happen?

Unlike its Northern counterpart, watching the Southern Lights or the Aurora Australis in no mean feat. The Southern Lights usually occur in Antarctica. It takes a geomagnetic storm of extreme proportions to push the lights out to Australia and New Zealand. A sure shot way of catching the Aurora Australis live in action is to fly over the ‘Aurora oval’ – a band in the night sky that is displaying the lights.

Also read: Drone Taxis To Fly in Dubai And We Can’t Wait To Try!

Flight To The Lights flies over the Aurora Oval to gives it passengers a breathtaking view.