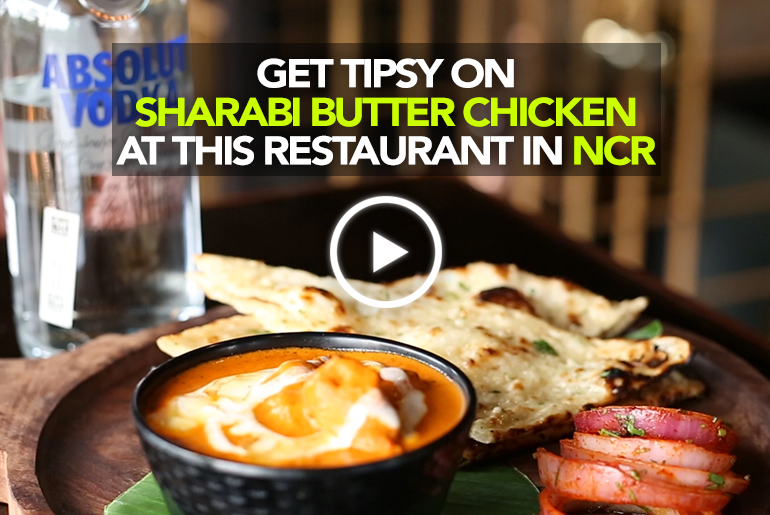 Get high on Sharabi Kebabi Butter Chicken at Friction – The Drinkery with a spoonful of vodka for all the meat and booze lovers in Gurugram.

Friction – The Drinkery in Gurugram is famous for its fusion food and cocktails & the Sharabi Kebabi Butter Chicken (₹440) is yet another creation. After introducing Paan flavored Dahi ke Kebab, this vodka infused butter chicken is taking the fusion food to next level. Vodka is added to the butter chicken curry while its being prepared so you’d get a vodka flavour along with your chicken kebabs. It is a relatively new resto-bar that opened up in Gurugram and has become famous for its concoctions and food items. The interiors are comfy and can accommodate large groups of people, but you can even take bae for date night. It serves mouth-watering food items along with premium brands of spirits only for your consumption.

Friction – The Drinkery serves a variety of dishes, but their forte lies in quirking up the local Indian dishes. The Malai Chicken Tikka Cheesy Fries, the Tandoori Spiced Aloo Chaat and the Deconstructed Pav Bhaji Fondue are some of their other creations. They organize live gigs, and performances by various DJs across the city. The music is fantastic and it’s an amazing new hangout for the young crowd.

Also read: These 5 Places in Delhi NCR Serve The Best Macaroons Ever!