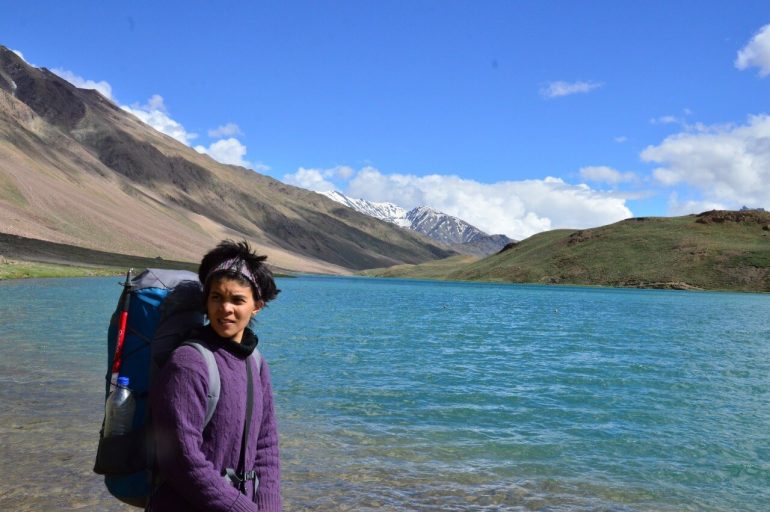 I am Anangsha Alomyan — a full time Instagram influencer, social media content creator also a travel blogger and a vlogger from Guwahati. I have gained a massive following over the past 7 months through my travel journeys, photos and videos. Spiti had been a dream place ever since I got introduced to this charming desert in 2016. I googled up the various places in Spiti, the culture and was very much intrigued with it. On a fine Monday morning, I happened to text my friend to do a stunning crossover trek from Kinnaur -Spiti. via the Pin Bhabha Pass. I knew that this trail and my coming days would be really enthralling and very adventurous because usually people end up in Spiti via car or go by bus. I started my journey from Delhi to Kafnu (Kinnaur) along with my one of my friends.

So, it was only the two of us. Life happens when you come out of comfort zone and I was ready to embrace the difficulties and challenges. I believe in destiny that is why I love to share this story with whoever I meet. Alone in the valley, it was just the two of us but after a while, we met 6 people from Himachal who were on their way to Spiti and were also crossing the Pin Bhabha Pass. Trust me the Pin Bhabha Pass trek is not for the faint hearted; it is a very difficult trek. Only if had known before, I would have prepared myself properly but since the trek was about the stunning cross over from Kinnaur to Spiti, I couldn’t stop my excitement and had already had made up my mind to do it. The big day approached and I had to cross a steep gully which was nearly to 75-degree angle on an ice glacier. It was a 4 hours treacherous climb to reach the summit. The trail was very slippery. The only thing that kept pushing me was the beautiful landscape around me. To my extreme right I saw large chunks of boulders passing me by. I realized soil was getting eroded,  and these were falling pieces of wet and lose ground. These were not good signs . Oxygen was minimal, I was panting as if my heart and lungs were about to burst. But after four hours of struggle and toil, I stood at the top of the pass.

Reaching Spiti was not at all piece of cake but once I crossed the Pass and entered the valley, I got emotional and then I looked around! What I saw was spell-binding – a landscape that was pure white heaven. The feeling was surreal when my dream of reaching Spiti came true. The vast measureless mountains and barren landscapes of the land will remain etched in my heart forever. For the next few days, I stayed in the capital city i.e. Kaza where I had pitched my tent and decided not to take up a room. After exploring Kaza, I went to Key Monastery by bus. Key monastery is 14km from Kaza, and 5 km from a small village called Chicham. Buddhist monks preach the notion of wisdom, peace and other religious Buddhist chants. The Spiti river is easily visible from Key which gives one a captivating view. I spent almost the entire time watching the landscape, sitting in the monastery and interacting with the travelers from other parts of India. I skipped by 9 am bus the next day. So, I hitchhiked and met a stranger on a bike and a couple of my friends requested him to give me a free ride. I also had the chance to meet the stranger’s mother once he invited me to his house, made me drink tea and offered some biscuits. We spoke for about 4 hours and when it was time to say goodbye – they told me “Bohut accha laga aapko milke, Spiti phirse aana.”

From Key Monastery to Kibber (a small village in Spiti, 5km away from Key) I hiked, and beyond Kibber I went to explore more hidden places. Sunsets are really amazing and eye catching in Spiti . After Kibber I headed towards Chicham: another village in Spiti and again, I had no place to stay. While traveling in a bus, my friend asked an old aged Tibetan man if we could find accommodation at his place. He very kindly agreed. Spitians are very welcoming; you will see a smile on their face all the time, He fed me with delicious food (Yak and Goat meat) and hosted me for three days after that chance meet of ours. All this while, I was just spending money on my commute. Not on my stay or on my food, thanks to the hospitality of the kind folks of Spiti. The next day, I took a bus from Kaza to Kunzum Pass to visit Chandratal Lake. On my 22 days of xxpedition in the Himalayas, I have crossed three passes, several valleys and performed two treks, total of 70 km. First was Pin Bhabha Pass and the second was the one to Chandratal Lake Trek, which starts from Kunzum Pass. (9km)

Himachal is known as Devbhoomi because of its purity and pristine environment. It is an extremely religious and holy place with a mixture of Hinduism and Budhhism. Camping in Chandratal lake is an offence, one has to abide by the rules and camp 2 km away from the lake. We (me and one friend of mine) nonetheless decided to camp closer to the lake and had a few locals complaint to the police who then came to seek us out. Believe it or not, the Gaddis (shepherds of the land) came up to us and tried to refrain these locals who were in charge of the lake, and helped us resolve the matter. By god’s grace, one of these shepherds approached us and proposed a two day shelter with him along with food and water. I can say this now, that I was extremely lucky to have known this shepherd who was like home to us in a faraway land.

Escaping the police next day, we hitchhiked towards Lahaul (Batal) from Chandratal Lake. The river Chenub was passing by me. Each time I could hear the reverberation of the water currents brimming with effervescence. I was the only one walking down this enigmatic valley. When cars overtook me, strangers would smile and giving me a thumbs up saying “Good going, keep on moving”. I missed my bus again from Chandratal lake which was scheduled to arrive at 4 pm to reach Lahaul -Batal(15 km). The sun was setting down; it was getting very dark. Hiking wasn’t easy for me to reach Batal within a short span of time. (15km). Good fortune has favoured me throughout the entire expedition.

Seriously I had no idea, that I would come across a car which would give me a lift till a point which was my final destination. I prayed to God desperately so that I could feel safe and have someone spot me during this solitary trek towards Batal. (I am so sure he is out there in the universe watching over everyone. Well for me he did listen to me, to both my heart and my soul.) And here I was, bagging a lift to my destination!

I didn’t plan for this to happen, I committed to my travel plan but some things changed and the rest is history. I decided to head to back Kinnaur after successfully accomplishing my dream trekking route and ended up in Spiti. 25 days flew by only to realize that they felt like years (so much had happened!). For the next few days I decided to halt in Manali after a tiring journey from Lahaul- Spiti and Kinnaur. It was my friend’s hotel, so my accommodation and food were covered up. I went to see some few places around Manali like Nagar, Old Manali. I guess everyone dreams of going on a long trip in a short budget and I had done it, successfully!

Well this was all about my journey: it is a surprising thing to see with that with such a small amount of money, I managed to pull it off. And it was exactly Rs 4,200 in cash that I spent from Delhi – Delhi. I have never encountered such a wonderful experience in my life where the trip unfolded in its own way.  I reminisce every moment of my Spiti trip: the unforgettable journey to heaven and somewhere, inbetween death.