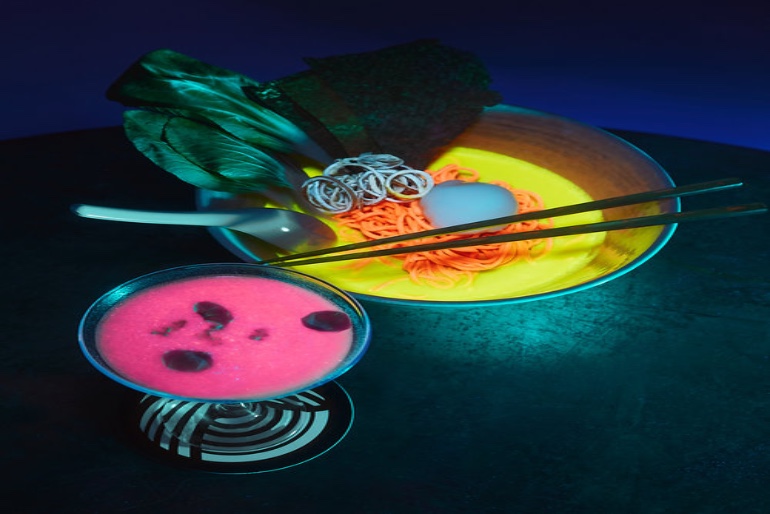 Looking to eat something out of the ordinary? Pop-up kitchen Nakamura.ke in Atlanta serves glow-in-the-dark ramen and cocktails!

Nakamura.ke, a family-run mobile kitchen pop-up in Atlanta, Georgia serves a creative dining experience. Ramen (a hug in a bowl) has become a high-profile dish in Atlanta. The city also celebrates a yearly ramen festival. With growing ramen shops in the city, Nakamura.ke is different from the local restaurant scene. It will seat six guests at a time for 30 minutes where diners will be served glowing sake cocktails, small plates and, of course, glow-in-the-dark ramen! The menu (created by London’s Bompas & Parr) is Prix fix but you’ll be able to continue dining on an a la carte menu of dumplings, desserts, and cocktails. As crazy as this concept sounds, the food is totally safe to eat. Ingredients like quinine and natural food colouring are used which glow under black light.

When their souls are near ?✨

Story Behind The Concept:

Nakamura.ke is said to be based on Japanese folklore and familial love. It tells the story of the ‘Nakamurans‘ – a family of yokai, who served the mythical looking ramen in the underworld. Atlanta artist, Ami Sueki, dreamt of this idea three years ago and has now turned this story into a dining experience. According to Atlanta Magazine – Sueki says, “We wanted a soul-to-soul interaction and bring the Nakamuras to life.”

Nakamura.ke will run from January 30th to February 16th at the Edgewood Avenue and move to Paris on Ponce from February 20th until March 2nd (tickets are already sold out). Dinner ticket holders get free access to the after-dinner event while others can enter with $10 tickets available at the door. Currently, this pop-up is only available in Atlanta but there are tentative plans to bring its theatrics and glow-in-the-dark ramen to Los Angeles, London, Miami, New York, Tokyo, Seoul, Sydney, and Dubai.

We can’t wait for this LIT experience already!